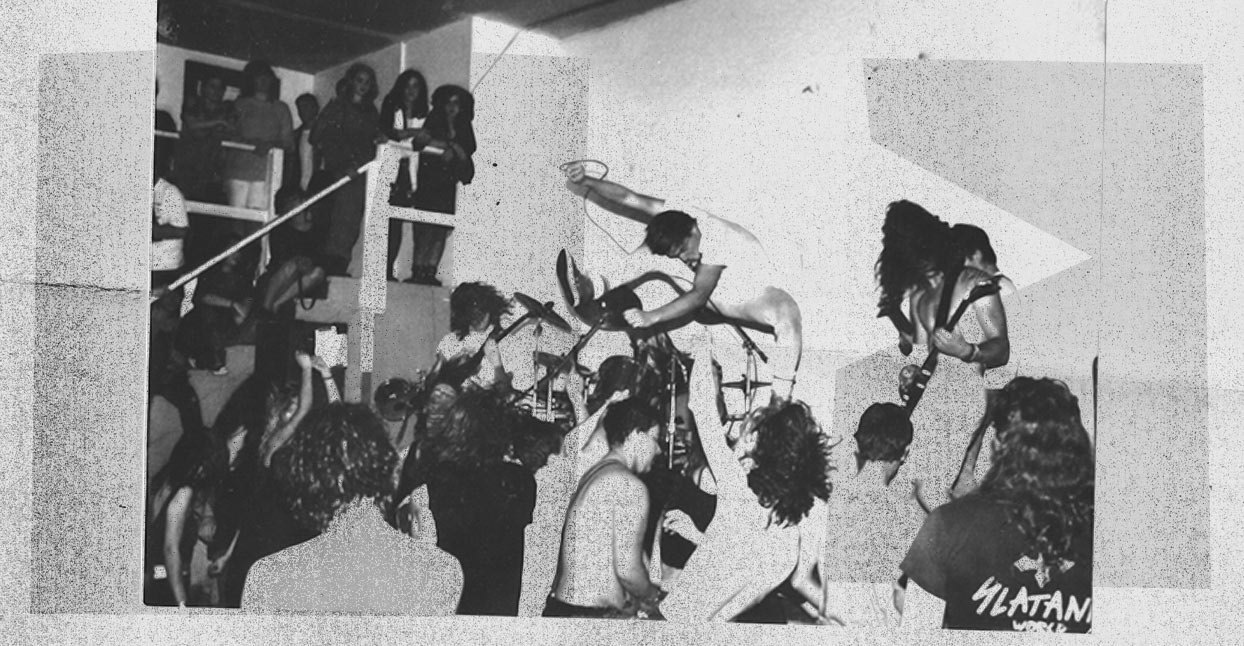 On an island off the coast of Western Canada, in the late 1980s, Mission of Christ’s contract with the iconic Metal Blade Records sat unsigned in the backseat of their vocalist’s car for months—a perfect metaphor for the thrash act’s ultimately unfulfilled potential. Thirty years later, the Victoria, British Columbia outfit’s two long-out-of-print demos have been exhumed, dusted off, and reintroduced as the intensely whip-cracking Mission of Christ collection. Their sinister shredding and apocalyptic wordplay were certain proof of Mission of Christ’s ascendence as Vancouver crossover royalty, but despite being offered multiple deals that could have broken them into the global metal community, a series of miscommunications and missed opportunities have generally limited the act to being nothing more than the subject of local lore.

Before Mission of Christ began desecrating local basements and community halls, its members broke the speed barrier in the early ‘80s punk scene. Guitarist Kev Smith originally hoisted a bass in The Neos. An infamously fast first-wave hardcore trio, the Neos’ pair of 7-inch singles made a huge impact on bands like Amherst, MA’s Deep Wound, which featured future Dinosaur Jr. leader J. Mascis on drums. Formed in nearby Sidney, B.C. in 1982, the similarly speedy Jerk Ward were a trio of 13-year-olds: guitarist Stephen McBean, bassist Randy Long, and drummer John London. Their music was built on the blueprint laid out by the Neos, with their pre-puberty voices cracking above the rudimentary power chords and the Pepsi-caffeinated scissor beats of “U.F.O.” and “Kill the Pongos.” Smith would end up joining Jerk Ward on second guitar after the Neos broke up, but that band also called it quits by 1984.

Singer Mike Synnuck went to elementary school with the Jerk Ward kids, and was pulled into their social circle by McBean, who introduced his new friend to the Sex Pistols and punk fashion (“They used to call me the fake punker back in the day—I’d have to hide all my punk clothes in my bag and change on the way to school,” Synnuck says with a laugh). A few years later, after watching the Neos and Jerk Ward sputter out, Synnuck was asked to join a new joint project in 1986. Dubbed Mission of Christ, the quintet was inspired by the then-developing crossover scene, which fused the fury of their hardcore with the technical finesse and theatricality of metal. “I hadn’t even picked up a microphone,” Synnuck says, adding that his budding roar was modeled after Corrosion of Conformity member Mike Dean’s rasp on their landmark Animosity.

After their first few shows, the outfit tracked 1987’s Silence in Grave demo in the bowels of their shared home in downtown Victoria. Despite the oddly pious-sounding band name, opener “Nocturnal Serenade” revels in raw, riptide-quick downpicking and minor key maleficence; Synnuck’s sinewy growl describes the “horror of nightfall,” when a beast from beyond starts “Ripping your flesh, crushing your bones / Slashing your face, eating your brains.” The demo bounces between these kinds of doomsday-prophesying paeans, which were penned by McBean, to more personalized manifestos on anxiety and isolation (“Never to Be”) and failed relationships (“Lovelust”), which were written by Synnuck.

“McBean was more ‘demon man’—Satan, Lucifer, and all that,” Synnuck says with a chuckle. “I came from more of a socio-political aspect….maybe more emotion than anything. I was an emo punk before emo punk was around. I wanted to cry all the time, right? All my girlfriends that didn’t love me, I had to sing love songs to them.”

A few hundred copies of the demo were dubbed at the M.O.C. house, and primarily sold locally. McBean went the extra mile, though, by shoving a stockpile of tapes into an Adidas duffel bag, taking the two-hour ferry ride to Vancouver, B.C., and hocking them outside of a Suicidal Tendencies gig. The tape’s “Nocturnal Serenade” and “Crypts of Darkness” gained extra traction after being pressed onto a split 7-inch with Vancouver crossover act Fratricide. These songs were also recorded live on the soundstage of local news station Chek TV for a music program, the band cloaked in the heavy fog of a dry ice machine. (Synnuck notes that the sound of the television studio session was “the shits,” but it was a nice notch in the bullet belt, nevertheless.)

While Mission of Christ were skateboarders dipping their toes in the boggy recesses of satanic metal, Victoria’s punk and metal communities overall didn’t coalesce as easily. Despite having similar music tastes as their local peers, Synnuck has memories of being chased and bullied by Victoria’s blue-collar headbangers. “We’d walk by them; they’d throw shit at us. They couldn’t figure it out, right? It wasn’t until Anthrax decided that they would embrace punk that these guys started figuring it out, like, ‘Hey wow, this isn’t that bad!’”

Victoria’s first proper crossover concert took place in the fall of 1987 at Victoria’s Old Age Pensioners hall, and attempted to bridge the gap between fans of Mission of Christ and Armoros, a Vancouver Island outfit with a similar sound, but more of a rock-world attitude than the grimy basement scene M.O.C. called home. The olive branch snapped almost immediately, as the concert devolved into a melee of violence, metalheads whaling on punks. “When you see that stuff happening [from the] stage, you just go ‘What the eff is going on? Why is this happening?’” Synnuck recalls. “You just hope that it’s none of your buddies getting the shit kicked out of them.”

A lone Seattle booking, meanwhile, was scrapped when one of the band’s cars was turned away at the U.S. border. Mission of Christ’s music still managed to travel outside of Canada, with the strength of Silence in Grave leading to record deal offers from the U.K.’s Manic Ears imprint, as well as from Alchemy Records, a Bay Area company that had already issued debut albums from the Melvins and Neurosis. But for a group of teens whose foresight was often limited to who was buying beers for the night, the thought of traveling to the U.S. to cut an album seemed ludicrous.

“You’re a teenager, and you barely have a dollar,” McBean confides. “I remember the Alchemy thing, like, ‘You’ll come to San Francisco and we’ll record you!’ I remember thinking, ‘How are we going to get to San Francisco?’ We don’t have a vehicle; we definitely don’t have money to fly down there. I barely had an amp most of the time!”

They were, however, tempted to up the professionalism when Metal Blade Records came calling with a multi-album deal. After receiving the paperwork, Mission of Christ tracked a four-song demo that displayed a newfound technical edge. Compared to the straightforward speed metal strafing of Silence in Grave, “Disbelief” and “Never to Be” were heavy on mid-tempo groove; McBean and new guitarist Tolan McNeil delivered decidedly noodlier interlocking licks than the more readily horns-raising riffage of the first demo. Unfortunately, this complexity was met with indifference, and contact with the label dried up. Mission of Christ printed up 100 copies of the aptly-titled Demo 89 and quickly sold them off, but the rejection was deflating. The quintet stalled on writing any more material, and McBean says that the metal scene in Victoria became increasingly “violent and gross.” Mission of Christ slowly came undone as they approached adulthood, playing a final show in September of 1989 opening for Sons of Freedom, a major label funk-rock act from Vancouver.

“I thought we were gonna be the cat’s ass,” Synnuck says. “We were going to be able start touring! I thought [the Metal Blade deal] was a stepping stone. But because we were so young and foolish, and just beginning to experience life, we didn’t have the faculties to put it all together. We were too wound up in being teenagers.”

McBean puts the end of Mission of Christ more bluntly: “It sounds kind of funny to say, but it’s true—we really didn’t care.”

In the wake of Mission of Christ, McBean, London, and McNeil went on to form Onionhouse, which took on the more melodic textures of alt-rock and early ‘90s pop-punk; Synnuck, determined to show his ex-bandmates that he could sing as well as snarl, fronted Soulcharge, though the project folded shortly after issuing their first demo. After learning that Corrosion of Conformity were looking for a vocalist, Synnuck sent a Hail Mary audition package to Raleigh, North Carolina, containing the demos, a VHS of the Chek performance, and a couple of glossy headshots—he’d never received a reply.

The members of Mission of Christ would go on to play in a number of groups over the years, but McBean has been the most prolific of the bunch. After drifting over to Vancouver in the ’90s, he’d play in post-hardcore groups Gus and Ex-Dead Teenager, move on to the Americana-exploring Jerk With a Bomb by the turn of the century, and then evolve that project into the psych juggernaut Black Mountain, which he continues to maintain from his current homebase of Los Angeles. Shockingly, Long was shot and killed by a policeman in 1990 in Edmonton, Alberta, after a domestic dispute call resulted in the musician allegedly lunging at a cop with a knife; drummer London passed away in 2012 after falling into a diabetic coma.

Jason Flower, a Vancouver Island record shop owner who saw Mission of Christ in their heyday and would play with ex-members Smith and London in experimental jazz/grind unit Mexican Power Authority, has been planning the Silence in Grave reissue for years. His Supreme Echo label has resequenced the two demos into a lost album of sorts, and filled the accompanying booklet with ephemera like show posters, band photos, and even a Xerox of the Metal Blade contract. The original 8-track recordings were sent over to Converge guitarist Kurt Ballou to receive a beefed-up remix, which arguably stand shoulder-to-shoulder with period classics from Corrosion of Conformity and Cro-Mags. “I believe that it’s going to be put on par with some of the greatest thrash, crossover, and speed metal bands of the era,” Flower says.

“I often reflect on the fact that history only remembers a small amount of what happened in any given time period.  So there’s great stuff like Mission of Christ that slips through the cracks, but deserves another chance,” Ballou says. “The recordings are every bit as good as some of the better known bands of the day, so maybe with adequate touring and distribution it could have been a revered ’80s thrash classic.”

While McBean is an active musician, Synnuck hung up his microphone in the ‘90s. He currently works as an estimator for an insulation company, but connects with McBean whenever they’re in each other’s hometowns. Though the Mission of Christ recordings have only just been excised from the Grave, it’s a camaraderie that’s hung strong for close to 40 years.

“That’s what sticks out to me, how that friendship started in grade six. ‘Hey man, do you want to hang out with me? I’m a punk rocker!’ I’m turning 50 this year, but it still sticks with me. To this day, I still listen to the same stuff; same attitude, same everything….other than having a wife and kid and all that stuff.”