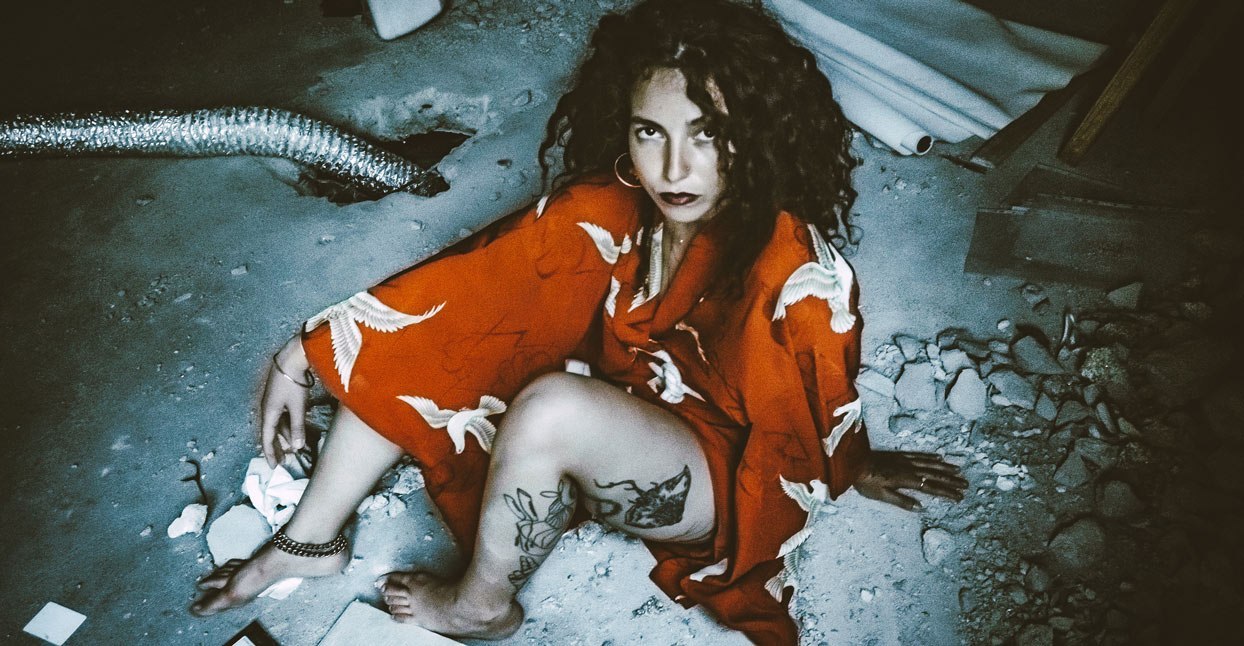 “I’m a very impulsive person,” says Sharon Stern, aka the Israeli MC Miss Red. “When this [part of my personality] comes through, I just want to fight somebody. I figured it’s better that I do it with myself, on the stage.”

That impulse to fight was front and center in the title of Miss Red’s 2018 debut album K.O. Produced by long-time collaborator The Bug, aka Kevin Martin, the album was confrontational, thrilling, and bass-heavy, with Stern’s no-holds-barred lyricism scaling to nerve-racking heights. But on her new EP, The Four Bodies, Miss Red adds a layer of ambient, witchy mystique to her fiery flow. On Bodies, she finds inspiration in shamanism, and the concept of the four bodies of existence: emotional, sexual, physical, and spiritual.

The Four Bodies EP, which once again features weighty riddims from Martin, marks a personal awakening for the nomadic artist. Stern was born and raised in Haifa, Israel’s traditionally mixed Jewish-Arab city, to Moroccan-Israeli and Polish parents; she lived in London on and off for two years beginning in 2012, before visa issues prompted a move to Berlin, where she lived until earlier this year. She now lives in Portugal, after obtaining Portuguese citizenship through Sephardic ancestry, and has arrived at a place of personal equilibrium, where the responsibilities of adulthood feel less daunting.

“Meditation has really helped me,” Stern says of her newfound mental well-being. She goes on to extol the virtues of music as therapy: “We’re not all born with the money to be able to go to someone with our problems and have them tell us what to do—we need to find our own tools to take care of ourselves. Be responsible for yourself first. I had a lot of rage, anger, lots of questioning and things to think about all the time, and the way I’m going now is down this spiritual route.”

Stern spent her early teenage years absorbing the reggae and hip-hop that her older siblings would play around the house, later getting stuck into the “simplicity” of roots reggae, which offered a welcome contrast to the trance she was hearing at outdoor raves. “My brother and sister were always trying to be DJs when they were younger,” she recalls. “I would say something like ‘banana’ into the mic, and they would mix that shit up on the computer. I had a vision of what it means to be an MC, and because I’m hyper, it’s very easy for me to rap fluently and have fun with it.”

During her adolescence, Stern discovered dancehall and began flexing her vocal chops in rub-a-dub style with Haifa’s dominant sound system, Easy Rider, and got to know the music of Sister Nancy, Shabba Ranks, and other Jamaican legends. She finished her obligatory military service in 2012 and fled Israel as soon as she could, having met Martin the previous year during one of The Bug’s DJ sets in Tel Aviv, where she got on the mic and won him over with her performance. The pair headed to the studio for an impromptu session the next day, which was the start of a long and fruitful creative partnership. “We link really well on just doing weird shit together,” she says.

After moving to London in 2012, Stern began performing as a live vocalist for Martin, alongside MCs Flowdan and Manga, making an appearance on The Bug’s 2014 album Angels and Devils on the song “Mi Lost.” A slew of singles followed, including a collaboration with Bim One Production for “Nah Bwoy” in 2015. Miss Red’s celebrated debut solo mixtape, Murder, came out that same year, produced by Martin along with Mark Pritchard, Mumdance, Stereotyp, Evian Christ, and Andy Stott. She released K.O. in 2018.

Tragedy struck in 2016 when Stern’s prom date was killed in action; on K.O., she explored the agony, persecution (her grandparents were Holocaust survivors), and turmoil of her upbringing—topics that took a long time for her to be able to discuss with clarity. “I’ve been going through hell, but now I’m in a place where I feel like I can get across what I want to say.” On The Four Bodies, her music sails off in dark, downtempo directions, taking her aesthetic further into the leftfield and capturing a more sedate quality that seems to reflect her current mindstate. “For the first year, I just wanted to grab a mic and just go off on an old-school rhythm. But today I’ve moved on, everything has started to blend in more, and this is where the EP comes in. Suddenly I’m feeling like it’s all evolving into some other shit.”

On “Don’t Text Back,” Stern is “possessed by a bad feeling” that can only be exorcised by exercising her voice. Here, Martin’s delicate patchwork of drones serve as the perfect foil to Stern’s bewitching vocals, which caution: “Don’t give up.” The track is an exploration of the “emotional body,” Stern explains. “It’s about a game, but a very destructive one.”

“Loco” ups the pace to focus on the “sexual body,” and Stern’s flow has a high-pitched, rapid-fire urgency. It’s bolstered by Martin’s apocalyptic sonics: clattering percussion, bass rumbles, and tumbling synths all vying for attention. “Have you ever had that feeling that tomorrow might not come?” asks Stern. “This is about the desire you have when the world is about to end.”

Elsewhere, “Prayers” radiates a spiritual glow, awash with Martin’s celestial, airy drones. “In 2019, everything scares the shit out of me,” says Stern. “’Prayers’ is the body I feel—everybody is praying all the time for this time to pass, for this great fear to be gone.”

Dancehall, dub, reggae, and their messages of peace and unity have helped Stern to find solace from the chaos and violence of her upbringing. But as a non-black dancehall artist choosing to adopt a Patois twang, the issue of cultural appropriation as appeared often enough that, in 2017, Stern posted a lengthy statement on Facebook expounding her sensitivity towards the history of Jamaican dancehall and reggae. “I just love seeing things that come from passion and art, and if this is the language that reggae speaks, I want to speak that language.”

Given her love of the music, it makes sense that a trip to Jamaica is something Stern thinks about often. “Every year I say I will go, but then I realize I need resources and time… but it will come. I know a lot of Jamaican people, and I’ve been invited many times, but I couldn’t just go there for a week.” Then, perhaps remembering her nomadic tendencies, she adds, “If I go there, I might not come back.”