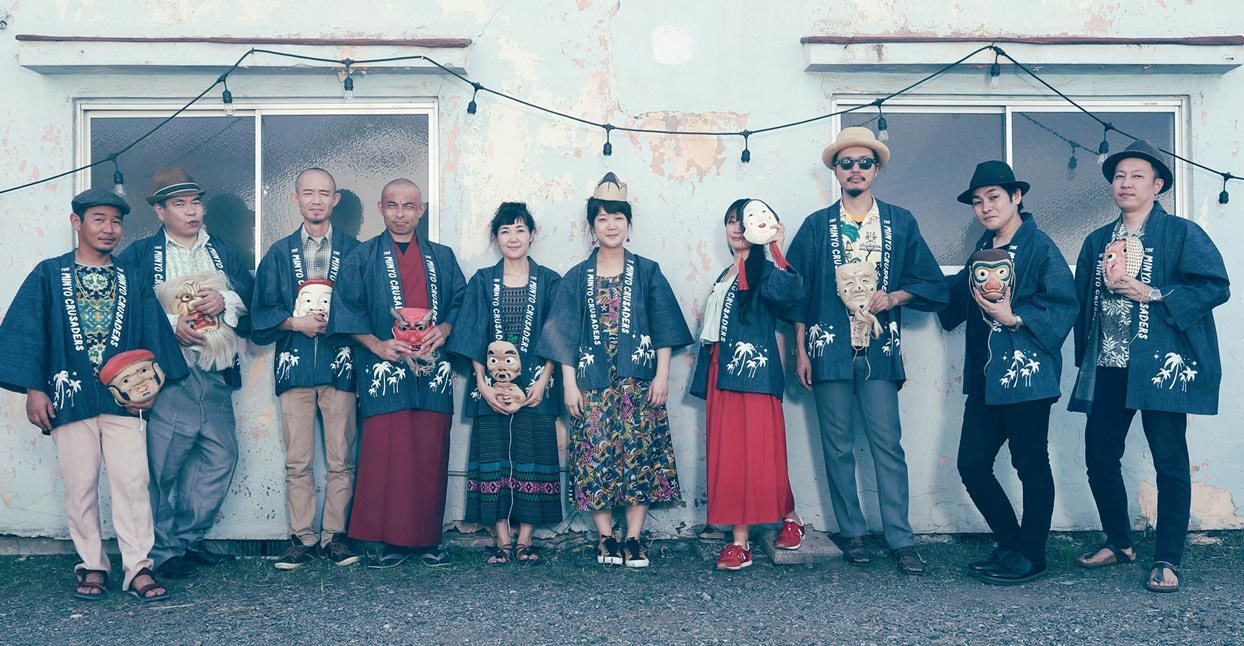 In his short story “The Preserving Machine,” Philip K. Dick wrote that “music is the most perishable of things; fragile and delicate, easily destroyed.” The character who speaks that line sets about turning music into DNA to enable it to survive for future generations. In a manner of speaking, the Tokyo group Minyo Crusaders are pursuing the same ends—albeit without the assistance of a laboratory, or indulging in any gene splicing.

First, some context: “Minyo” are traditional Japanese folk songs, localized bits of pastoral verse and melody, often unique to their hometown or district. Minyo have mostly disappeared from everyday consciousness in 21st century Japan, but on Echoes of Japan, the new album from Minyo Crusaders, they’re given a boisterous afterlife, transformed by arrangements that draw heavily on dub, cumbia, and Afrobeat.

Take “Kushimoto Bushi (Cumbia),” the album’s first single. A slow-scraping cumbia rhythm works as a sort of transport for the song’s hook, a blast of military brass. The syncopation offsets the song’s brittle, eerily beautiful pentatonic wail, while grungy down-chanks of guitar and downbeats give the composition a power greater than its various parts. The sound bristles, but it also slaps. On “Hohai Bushi (Afro),” singer Fredy Tsukomoto’s plaintive, sometimes yipping vocal is underpinned by greasy Afrofunk that suggest early Fela compositions like “Swegbe and Pako.” Though subtitled “Ethiopian Groove,” the sweeping feel of “Akita Nikata Bushi” is more akin to the desert blues of Mali; “Otemoyan (Reggae)” swipes a bit of the riddim from dancehall classics “Ring The Alarm” and “Bam Bam.” Echoes of Japan proves Minyo Crusaders to be masters of many styles and feels, from the frenetic beguine “Mamurogawa Ondo” to the languid bolero treatment of “Yasugi Bushi,” which ends with a Pharoah Sanders-ish flourish on tenor sax.

Preservation is clearly at the heart of the mission, as Crusaders guitarist and co-founder Katsumi Tanaka confirms. “Minyo used to be music for the common people; popular music,” he says, speaking by phone from Tokyo with the help of a translator, “but it doesn’t work like that anymore. It’s regarded as a forgotten, out-of-date music. By comparison, reggae, cumbia, and ska are very well accepted. By combining the two, I believe traditional Japanese song minyo could be revived, bringing back its own charm as a music for the people.”

Most of the minyo in the Crusaders catalog were painstakingly collected by Tanaka, from his own collection of 78 RPM discs and similar recordings uploaded to the web. YouTube, in fact, played a critical role in developing the Minyo Crusaders repertoire. “There, I found lots of different music sources and––even searching for one song—I find that the same song can be arranged very differently depending on the period [it was recorded in]. Minyo was still taken as a very vibrant and popular modern music in certain eras and that was very inspirational. That completely changed my mind about what minyo could be,” says Tanka. Accordingly, Tanaka pulled together the Crusaders current line-up of ace musicians from other bands, specifically seeking players who were adept at Afro-Latin and Caribbean forms to develop this vision of a living minyo. “It’s maybe a good way to provoke the question, What’s Japanese?” he says, “or how we see our identity as Japanese people. We’re enjoying our own Japanese culture as a kind of ‘world music.'”

Such juxtapositions are almost as novel in Japan as they are to listeners outside it. While reggae and other variants of “world music” are extremely popular there, they don’t intuitively mesh with minyo. As Isaku Kageyama, a musician and teacher at L.A.’s Taiko Institute explains, “Minyo uses a similar beat to cumbia, but the feel and groove is totally different. Reggae uses a lot of syncopated melodies, while minyo melodies tend to be very downbeat focused.” Jeremy Freeman, aka Scratch Famous, Tokyo-based proprietor of the reggae soundsystem Deadly Dragon Sound, arrives at a similar conclusion: “The bedrock sound of Jamaican music has always been the ‘heartbeat’ of a kette drum. The taiko drums that I have heard do not have that element.”

Minyo is also not an obvious thematic fit with outlaw artforms like dub and reggae—which is not to say that the urgency of Minyo Crusader’s sound is not powered by an equally strong generational undercurrent. “I may be making a jump here,” says Freeman, “but the 2011 earthquake/tsunami had a profound effect on Japanese society. There was a galvanization of a national consciousness and community. At the same time, there was a marked cynicism in reaction to the government’s handling of the crisis, specifically the transparent falsehoods that were being spread about nuclear safety.

“These two combined forces—a reawakening of a shared Japanese consciousness and a distrust of government—gave rise to a greater sense of concern over all that has been lost in Japan in the decades since World War II,” Freeman concludes. “I suspect Minyo Crusaders felt that as an impetus to revive the folk music of Japan.”

Tanaka himself is quick to admit that, though it may sound like a call to arms, Echoes Of Japan doesn’t constitute message music in the traditional sense. “It’s a very difficult question, because in the lyrics of minyo itself…there’s no message songs. It’s more describing the beautiful countryside in a particular place, a visual image.” But perhaps that image—of Japan, the land itself—is as deserving of preservation as any message. “When Japanese people listen to minyo—it’s more it’s telling like a picture,” Tanaka says. “It’s telling a landscape.”