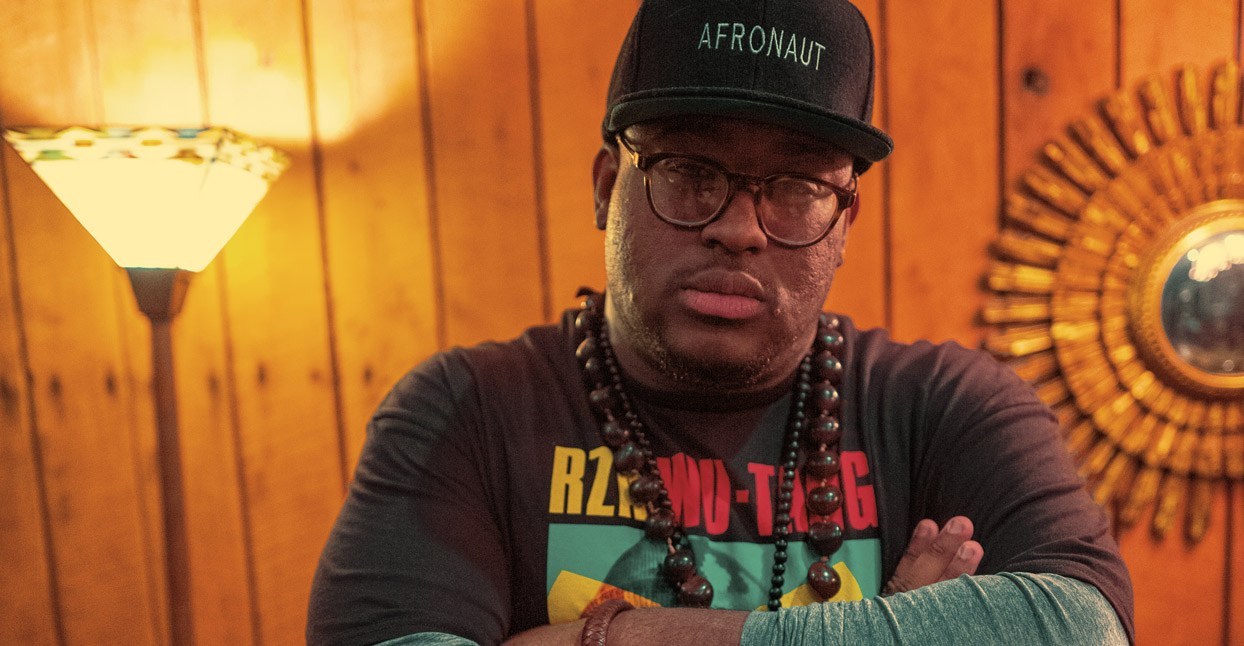 In the music of the Philadelphia-based rapper Marcus Harris, aka MH the Verb, introspective and socially conscious lyrics occupy the same space as party-ready hooks and jazzy instrumental passages. Alongside ArtHouse95, the interstate artist collective that he co-founded in 2015, Harris has quietly amassed an impressive catalog that traverses a wide range of sound and subject matter—anthemic boom-bap jazz on 2014’s The Balloon Guide, 2017’s political and futurist epic Afronaut, and the new improvisational LP Ninja Turtle: Live From Philadelphia.

Art House95 is a bicoastal, jazz-informed hip-hop collective with a fluid membership of instrumentalists, producers, and visual artists; synth maestro BusCrates fits in as easily as prog-fusion duo Trap Rabbit. ArtHouse95 is also the vehicle through which Harris collaborates and realizes his musical vision. He composes songs himself in a Digital Audio Workstation, then his collaborators build on his foundation. Together, MH the Verb and ArtHouse95 create hip-hop based on modern production techniques, utilizing live instrumentation and allowing for the freedom of jazz improvisation.

“ArtHouse95 is an outlet that I formed as an extension of my network,” Harris says. “The crew is primarily based on the East Coast of the I-95 corridor, hence the name. Over time, as I’ve built more relationships, we’ve been able to use the framework of the collective to work as an artists’ resource center for all of us to get support in releasing music, promoting projects, and booking shows.”

In December of 2018, Harris, along with a lineup of musicians that included BusCrates and members of Trap Rabbit, convened for a day-long session at Turtle Studios in Philadelphia. Recorded under the guidance of producer Johann Sebastian, the session was intended to be a starting point for the group to lay down source material for Harris’s forthcoming full-length. While vocalists like Philly veteran MC Kuf Knotz and MC/visual artist Miggs Son crafted verses, Harris and the band began jamming on older songs from Harris’s back catalog. The three songs they selected—and elaborated on with entirely new arrangements—make up the entirety of Verb’s latest EP, Ninja Turtle: Live From Philadelphia. The musicians flexibility gives the old songs new shape and countours: “Aliens Prefer Jazz” opens as the kind of smooth and organic hip hop-jazz that The Roots and The Goats pioneered in the early ‘90s, but it soon expands to become a dreamy improvised jam, with a beautiful electric piano solo from Trap Rabbit keyboardist Logan Roth.

“They all stem from tracks I’ve produced in the studio that featured little to no live instrumentation,” Harris says. “Over the years playing with different musicians, they’ve all interpreted those differently, and have spawned completely new vibes.”

The EP’s final track, “Small World,” opens with an uptempo breakbeat and keys, then launches into a jazzy, full-bodied funk jam. After nearly three minutes of adept soloing and interplay, the band settles into a half-time groove, allowing Harris to come in with a confident, swaggering flow. Although the song has lived in Harris’s live repertoire for years, this version began as a furious instrumental jam that started before he even entered the room.

“My favorite was getting the seven-minute version of ‘Small World’ which has been orchestrated in multiple formats since I first wrote in 2011,” he says. “The band really channeled the energy of Afro-funk, and I love the percussion work of Anthony Byrnes and Arjun Dube [of Trap Rabbit]. It was intense—and I wasn’t even in the room when they started it. I came in halfway through and hopped on the mic, and we just freestyled it from there.”

Ninja Turtle: Live From Philadelphia is an example of what can happen when hip-hop lyrics meet open minds and solid jazz chops. MH the Verb and ArtHouse95’s work is a participatory effort—a flashpoint where rap songs become improvisations bursting with fluidity and spontaneity.