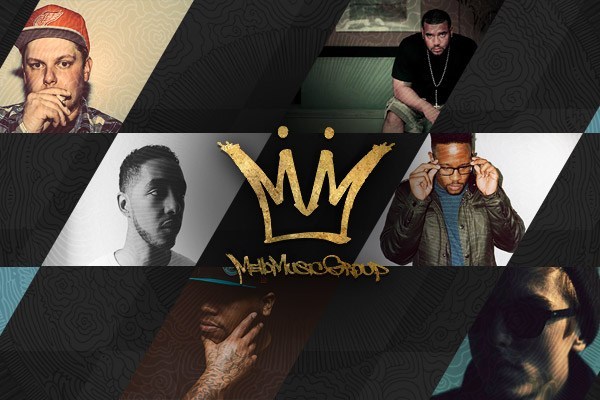 “I like history, I like liner notes. Musically I don’t want to just hear a hot record. I wanna see the progression of artists. Old records were made that way. What if I could help these seeds grow because I think they have potential?”

The old proverb goes, “when life gives you lemons, make lemonade.” Michael Tolle didn’t know how to make lemonade, but that didn’t stop him. The economy crashed in late 2006 just as he was about to graduate. With an English degree in hand, he set up a teaching company. He explains, “I didn’t know what to do with the money I was making, and stocks and real estate weren’t an option.” Tolle concluded that he should put his money into music, which is where his heart really was. For a few years he’d been making mixes of some of his favorite hip-hop tunes to play late at night. He says, “I wanted to highlight stuff I listened to — local artists. I imagined I was a DJ.” He called the compilations Mello Mixes. One night he sat in the car with the woman who would become his wife, debating ways to get deeper into the music business, even though he didn’t know much about it. He thought that maybe he could buy some beats, make some music, and support artists he felt deserved more. “It all started with buying one Kev Brown beat,” he recalls. He also remembers thinking, “are we really going to spend a thousand dollars on a beat?!”

Founded in 2007, the Mello Music Group is now one of the healthiest independent hip-hop labels around. It’s a diverse musical family that includes producers, MCs, and musicians such as: Washington, D.C.-based Oddisee, Los Angeleno Open Mike Eagle, Detroit’s Apollo Brown, plus West Coast freethinkers Dudley Perkins and Georgia Anne Muldrow, and East Coast classicist Rapper Big Pooh. Not a bad roster for someone who, by his own admission, didn’t know what he was doing. Perhaps his naiveté during a period of change made building a new kind of label possible. I got the scoop from Tolle this past month, as he readied some heavyweight releases from the likes of Red Pill (of Ugly Heroes), L’Orange & Jeremiah Jae, Oddisee, Quelle Chris and many more.

Bandcamp: You started the label at a time when the music world was in flux. MySpace was winding down and new platforms were emerging. Did you see this as opportunity?

Michael Tolle: Mello Music Group exists because the economy crashed and the industry moved to digital. I jumped in when artists had no money, labels weren’t giving it to them, and new methodologies were available to try. I could operate at almost no cost from Arizona and reach out to amazing artists with no backing. I got a foothold while everything else was falling apart. Our first release, Oddisee 101, came out in December 2008. A year later, the Diamond District album was the release that made us into a business. Bill Sharp, who worked at Fat Beats at the time, told me we needed a publicist for it. He said, “this record will open it for you.” So we did, and it worked.

BC: Were artists receptive to someone like you contacting them?

MT: They were. Something I learned very early on is that if you’re new, you’re like blood in the water. Back then, I was happy to be there and wanted to give my most to everybody even if I was being swarmed and picked at. You learn that it’s a hustle for a lot of these people, too, they’re just trying to clean your bones. But once I started putting together songs and building credibility, I think people realized it was more than money, that there were opportunities for development. Artist development was and still is gone in a lot of places. Once it got out that we still did artist development, the respect started coming in. I viewed it as paying dues. Like anything, you pay to play until you learn. So you better learn quick.

BC: How broad were you thinking when you started?

MT: I knew what I wanted and who. Detroit, D.C., and New Orleans were in my mind. These cities were musical hubs with fertile sands, yet they were impoverished areas. The talent pool was so rich and the sound wasn’t pretentious. We still don’t have artists from New Orleans, but we’ve branched out and signed people from L.A. and beyond.

When I began formulating in 2007, Oddisee, Kenn Starr and Black Milk were my targets, and Georgia. I wanted those people to be the foundation of the label. They were all young, so I saw amazing talent that could be built. In the long run, I worked with all of them. Black’s not on the label but we’ve bought production from him a lot. Oddisee was the one who was the most ready to run from the start. He was looking for someone willing to run with him and do all the things he wanted to do.

BC: How do you define the aesthetic of MMG?

MT: I’ve always defined it internally as music from the heart of American culture. We’ve never gravitated toward thugs or gangsters. Most of our producers and MCs are average people who are talented and a part of this culture. That was appealing to me. I don’t like the lottery of it, people going for broke. I always wanted musicians, people who made beats or started rapping but were trying to become something more — like Oddisee, who’s now a fully fledged musician. To me we are very middle-American. Red Pill, our new guy from Detroit, exemplifies that, and someone like Apollo Brown, who’s very blue-collar.

BC: Looking back, you’ve put out a lot of material and broadened the scope of the label since the Diamond District debut.

MT: The old model of hip-hop labels was like a gang — four or five guys who are the same. Soldiers, captains, all these metaphors for it. Like Rocafella. Make one a star and he would put on his friends. We view it more as being a bunch of musicians from different areas, influencing each other and growing together over time. As long as people bring me good records, I’ll find people who are talented and can work on them — and that creates graphic design, engineering, and promotion positions. They’re all jobs within an industry, and also a sort of personalized industry.

There’s a thing with musicians, and athletes too, whereby we accept that 99% will starve while 1% makes tens of millions of dollars. I’ve always wondered why the designers, marketing, and distribution people can make $30–100K a year, but musicians have to starve or be ultra-rich? Why can’t we have an industry of musicians building careers and making $60K a year? I was more naïve back then but I like the idea. I wanted to find a way to play it out. We didn’t always give advances to artists. We’d ask them the minimum they need for stability — things like rent, phone, etc., and we put that in the contract and pay it monthly. It’s still contracted labor, but a different way of paying. Our artists were already stable adults, but we wanted to provide security and allow them to settle down. And then there’s a fee for work, too. It’s all rolled up in the idea of an advance for each project. It also encourages the artists and myself to get to know each other with time. We talk to each other. We interact on a human level.

MT: I don’t know if it was necessity or viewing the world differently. It just made sense to me. I don’t understand the model I stepped into because I wasn’t from the industry. I can’t imagine someone going for an interview for a bank and being told, “ok we’ll give you all the money for your salary for the year now,” and then expecting them to survive.

I like history, I like liner notes. Musically I don’t want to just hear a hot record. I wanna see the progression of artists. Old records were made that way. What if I could help these seeds grow because I think they have potential? So it also lends itself to signing people for multiple albums. It gives them more freedom to express different feelings at different times.

BC: What are some of your favorite memories or highlights from the past seven years?

MT: Dudley Perkins officiated at my wedding and Georgia was there to sing. It was a small affair with my relatives and those of my wife from South Korea. Dudley and I had talked every day on the phone for a year and a half, but never met in person. And we’d been doing a lot of work with the two of them. So he flew here and married us. He came in with alligator skin Nike dunks and a white, head-to-toe robe.