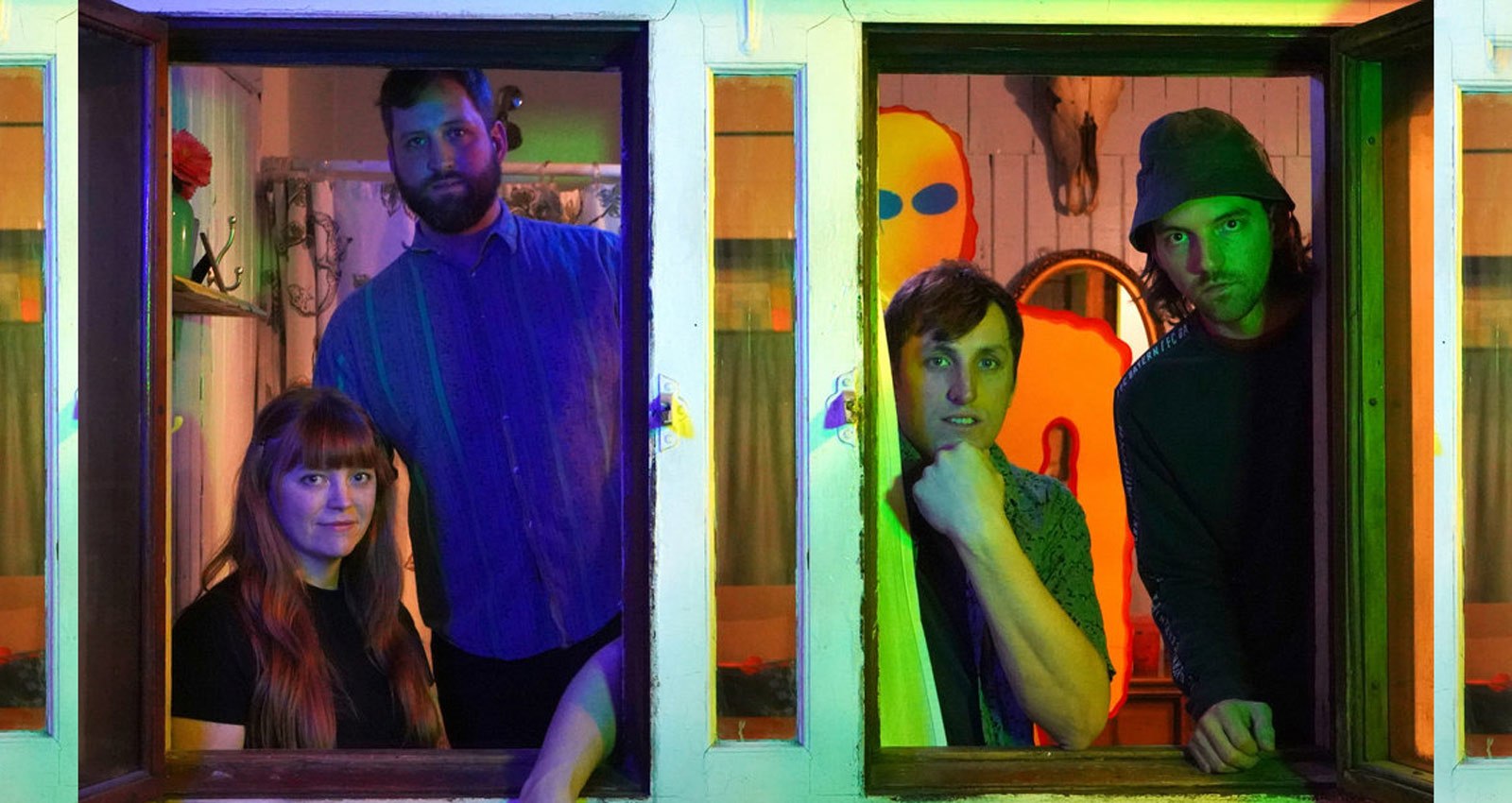 For some artists, the responsibility of parenthood forces them to table their creative endeavors for a spell. But Chicago’s Melkbelly are a family band: vocalist/guitarist Miranda Winters is married to guitarist Bart Winters, whose brother Liam plays bass. So when the Winters welcomed a daughter into the world last summer, the couple began prepping for the unique challenge of bringing a one-year-old on the road with them the following spring.

Obviously, that isn’t happening now: the group’s dates have been pushed back to August as a result of the Covid pandemic. But even at home, those family ties prove crucial in keeping the band—which is rounded out by drummer James Wetzel—in motion.

“I’m really good friends with both of my other bandmate’s wives,” Miranda says. “Before quarantine, when we were still practicing, one of the wives would come over before we would go to practice, and they would just take care of the baby while we were gone.”

That kinship is even reflected in Melkbelly’s sound; a form of sinuous noise-rock that tugs between melody and chaos like siblings butting heads. Their 2017 debut Nothing Valley weasled sticky indie-pop hooks into the crevices of wobbly noise structures, creating rickety rock songs that sounded like they were glued together by a thick layer of Mod Podge distortion. It was a loud and exciting dynamic; but on their new album PITH, they wanted to reign in some of that turbulence and be more intentional about their textures.

Doing that required the band becoming even more like a family: they recorded the album at Russian Recording in Bloomington, IN because the space had residential quarters that allowed them to stay for a few days and collaborate intensively.

“We wanted to all be stuck in one place together, and not [be] able to leave while taking our time,” Miranda says. “And then if somebody gets mad about something you can’t just leave, you have to talk about it. Playing is kind of like having a conversation. So the more comfortable and warmed up we are with each other personally, it makes playing music easier.”

Compared to Nothing Valley and the string of EP’s that preceded it, PITH’s edges are smoother and everything sounds a little cleaner. Normally, those would be disappointing changes for a band that thrives in cacophony. But Melkbelly are so instrumentally tight—and their songs have such weird, woozy melodies—that this slightly preened version of their sound suits them. Miranda’s less intense vocal delivery was also informed by the fact that she recorded her parts while eight months pregnant.

“I don’t think there’s any screaming on this record,” she says. “Primarily because I was getting interested in trying to sing in a really low register; bassier stuff, stuff that reverberated. Because I was reading about how that’s a way that you can communicate with a fetus.”

Despite the album’s in-the-moment sonic approach, Miranda’s lyrical topics are mostly vivid flashbacks from throughout her life. The song “Humid Heart” references the way a science museum exhibit that Miranda saw as a kid came rushing back to her when a friend of the band passed away. ”Kissing Under Some Bats” is a collage of memories about going to house shows in Providence as an adolescent—which is especially fitting, given that the seven-and-a-half-minute song recalls Providence noise-rock lifers Lightning Bolt. “Stone Your Friends” is actually about what it sounds like: Miranda and her friends getting in a rock fight with some miscreant teens back in the day. “It’s one of those surprisingly literal lines,” she says. “I got my friends in a rock fight.”

Others are not so literal. Some of the subject matter on PITH was informed by a fairytale Miranda’s parents read to her as a child. “My parents are super religious and they would read me some fucked up shit, in retrospect,” she says. The one that stuck with her was a story called “Flowers For Milly,” which is about a mother and daughter escaping their house after losing the rest of their family to war. The pair run through the forest, stepping over craggy, thorny ground, until they eventually make it to soft, healing moss that soothes their throbbing feet. Miranda says the moss represented the relief of heaven, as the two of them had died on their journey. It was an extremely bleak and frightening way to describe the concept of an afterlife.

“Who reads that to kids?,” she asks rhetorically. “What’s wrong with people?”

She laughs at the suggested correlation between having a daughter and finding inspiration from twisted children’s tales. But when I ask if she’s planning to pass those types of stories onto her daughter, she stops giggling and trails off menacingly: “Not… yet.”