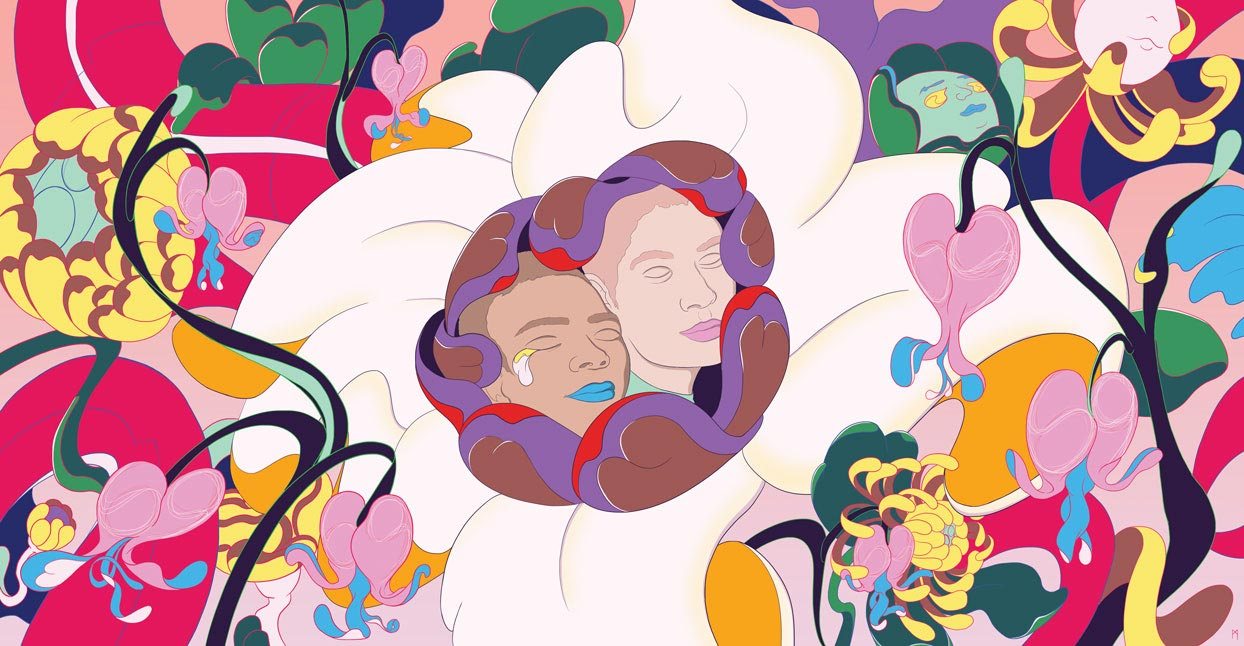 By 1999, The Magnetic Fields had long been darlings of the college radio circuit. The band, led by Stephin Merritt, emerged from Boston in 1991 with the single “100,000 Fireflies” on Harriet Records—a small indie pop label that would itself enjoy a cult following during that decade—followed by the self-released full-length Distant Plastic Trees. In the years that followed, Merritt balanced a steady stream of Magnetic Fields releases with several side projects—The Sixths, The Gothic Archies, and Future Bible Heroes—all of which positioned him as one of the era’s most well-regarded songwriters. So, when 69 Love Songs, a triple-CD collection that served as The Magnetic Fields sixth album, dropped on September 7, 1999, it was an event. In fact, its release was supported by a two-night stint in New York, where the band played every song off the album, in order.

In a recent Talkhouse podcast, Merrit and author Daniel Handler, aka Lemony Snicket—who was a collaborator on 69 Love Songs—discussed whether or not it was the last great album of the 20th century or first of the 2000s. (Merritt explained that there was greater demand than there were copies pressed for the initial release, so many listeners couldn’t get the album until early in 2000.) Ultimately, 69 Love Songs bridges both decades and millennia. It was a culmination of the work Merritt and The Magnetic Fields had been building until that point, and it set the stage for what would come in the next two decades.

In many ways, 69 Love Songs was a novelty: a behemoth collection of cross-genre tunes, united under a broad theme and cheeky album title. But it definitely didn’t seem out of character for Merritt. Part of his appeal as a songwriter is Merritt’s knack for writing vivid, emotionally complicated love songs, well apparent on earlier releases like “100,000 Fireflies” and the previous year’s single “I Don’t Believe You” (later released on their 2004 album, I).

The album catapulted the band out of the college radio and indie circle at a time when the music industry was changing. They would remain a cult sensation—but one that got significant recognition. In 1999, 69 Love Songs was included on multiple year-end best of lists, including the prestigious Village Voice Pazz & Jop poll, where it took the number two spot, sandwiched between Moby’s Play and Beck’s Midnite Vultures. Over the years, 69 Love Songs has spawned fan sites and a number of critical reassessments. In 2006, it got its own book in the 33 1/3 series, by LD Beghtol, also a collaborator on the album.

Meanwhile, four Magnetic Fields albums that followed—i, Distortion, Realism, and Love at the Bottom—all hit the Billboard 200. Merritt himself branched out into other projects, including writing the music and lyrics for the off-Broadway adaptation of Neil Gaiman’s Coraline, which earned him an Obie. In 2017, The Magnetic Fields released another massive concept album, 50 Song Memoir, which essentially serves as Merritt’s autobiography.

To celebrate the 20th anniversary of 69 Love Songs, we offer 10 tunes to draw you into this now-classic collection.

“The Book of Love”

Beghtol’s 33 1/3 book notes that, in 1999, “The Book of Love” was voted number two in a 69 Love Songs “top 10” poll for the stephinsongs.com mailing list. By 2006, it had risen to the top spot. Both the book and Merritt’s recent Talkhouse podcast note that the song has been performed at multiple weddings by multiple members of the band. Clearly, it’s a fan favorite. It’s also popular amongst musicians, having been covered by a wide range of artists, including Peter Gabriel and The Airborne Toxic Event. Gabriel’s version was particularly successful;  it appeared on the soundtrack of the film Shall We Dance? in 2004.

According to Merritt, per Beghtol’s 33 1/3 book, “Sweet-Lovin’ Man” began its life as a synth-pop song originally intended for The Magnetic Fields’ 1992 sophomore album, The Wayward Bus. It didn’t make the cut, and was reworked. Claudia Gonson, who sings lead here, said in the same book that she had hoped that “Sweet-Lovin’ Man” would go on to become “a major alt-country hit.”

Somewhere in between its synth-pop beginnings and alt-country ambitions, The Magnetic Fields hit a sweet spot. It’s a lyrically straight-forward song; Gonson’s vocals have a sense of hopefulness to them, which is juxtaposed with dense production that combines actual strings with synth ones. “Sweet-Lovin’ Man” is an example of a bunch of the multitude of influences for 69 Love Songs coming together into one piece that defies clear categorization.

“When My Boy Walks Down the Street”

In “When My Boy Walks Down the Street,” the exuberance of new love is apparent already in the opening line, “Grand pianos crash together / When my own walks down the street.” This feeling of overwhelming attraction grows with each sharp, beautifully hyperbolic line.

“When My Boy Walks Down the Street” plays with the tropes of giddy ’60s love pop in a way that was radical for 1999. Merritt, who handles vocals here, subverts ideas of gender with the line, “and he’s going to be my wife.” He’s also introducing marriage as an inevitable end-goal five years before the first U.S. state legalized same-sex marriage. That he does this with one fragment of a sentence, so casually dropped in the chorus, is a powerful statement.

If electronic Americana were a genre, “Grand Canyon” could be the defining song. Merritt’s references here are distinctly drawn from U.S. geography and lore. “If I was the Grand Canyon / I’d echo everything you say,” he sings, followed in the second verse by, “If I was Paul Bunyan / I’d carry you so far away.” It’s written as a folk song meant for a night around a campfire, with voices joining in as the song progresses. Yet, it’s also heavily a synth song.

In “Grand Canyon,” the hooks are so strong, and Merritt’s delivery is so incredibly forlorn, that it practically demands repeated listens. What becomes more interesting after the first play, though, are the small details in the production, like subtle fuzz that gives the impression of through dusty vinyl, and the echo on Merritt’s own vocals that emphasize the Grand Canyon metaphor.

A synth-pop gem with Gonson on vocals, “If You Don’t Cry” taps into the nightlife ritual of hitting the bar and dancefloor to try and keep the tears at bay. At 139 BPM, its tempo is closer to what you would hear at a ’80s electronic night where DJs are dropping tracks by the likes of Ultravox and Soft Cell. Lyrically, it directly references that experience of nursing your broken heart with booze and lonesome dancing.

Then there’s the chorus, “If you don’t cry, it isn’t love / If you don’t cry, then you just don’t feel it deep enough,” a theme revisited throughout the album. 69 Love Songs is full of so many deeply tender moments that it can be an absolute tear-jerker. Listen with a box of tissues.

The Magnetic Fields had already made a fair share of songs that could be considered synth-pop, but “Long-Forgotten Fairytale” is perhaps their most unapologetically ’80s of these gems. The Pet Shop Boys are an obvious influence on the cut—Merritt mentions this in the 33 1/3 book—but listen closely and you’ll hear strains of others as well, perhaps a little ABC or (fittingly) Book of Love. Dudley Klute, who sang with Belgian synth outfit Kid Montana back in the ’80s, handles lead vocals on this track.

In 1999, using ’80s synthpop as a point of reference was far from hip and, with “Long-Forgotten Fairytale,” The Magnetic Fields were among very few in the indie world to mine a sound that wouldn’t come back into vogue for another few years. It may be a bit of a throwback, but “Long-Forgotten Fairytale” also foreshadowed the sound of the early 2000s.

“Papa Was a Rodeo”

Another fan favorite, “Papa Was a Rodeo,” was voted number one in the stephinsongs.com poll back in ’99. The country-tinged number with Merritt on lead and Shirley Simms dropping in for the final chorus, is narrative-driven with a twist that might bring a happy tear to even the most hardened cynics.

“Papa Was a Rodeo” begins with the assumption that this affair will go nowhere. Our narrator warns that long-term love isn’t an option for someone who “never stuck around long enough for a one night stand.” Flash forward, though “and now it’s 55 years later / We’ve had the romance of the century.” A romance flick condensed into a pop song, “Papa Was a Rodeo” gives listeners a well-deserved happy ending.

“Swedish reggae” is the descriptive used for “It’s a Crime” in the 69 Love Songs 33 1/3 book, but the mellow cut with Klute on vocals has more of a new wave vibe. In fact, if there’s one song that sounds like a true predecessor to “It’s a Crime,” it’s Blondie’s version of “The Tide Is High,” at least at first listen.

Tune in a little deeper and you’ll hear the killer dub bassline bubbling underneath the vocals and electronic squiggles. It’s what gives “It’s a Crime” strength, an indicator that The Magnetic Fields were both studied in their approach to covering multiple genres and willing to have fun with it.

“The Death of Ferdinand De Saussure”

Then our protagonist shoots the academic and makes the proclamation, “It’s well and kosher to say you don’t understand, but this is for Holland-Dozier-Holland.”

The songwriting team of brothers Eddie and Brian Holland and Lamont Dozier helped define the Motown sound—and thus wrote some of the most memorable love songs of the 1960s and early ’70s. Amongst their credits: “Baby Love,” “How Sweet It Is (To Be Loved By You),” and “Stop! In the Name of Love.” They also wrote heartbreakers like “My World Is Empty Without You,” “You Keep Me Hangin’ On” and “Band of Gold.” If anyone knows anything about love, it’s Holland-Dozier-Holland.

In a sense, “The Death of Ferdinand De Saussure” is about the power of love songs. Can you really argue that humans don’t know about love after listening to The Supremes?

“I Can’t Touch You Anymore”

“I Can’t Touch You Anymore” might be one of the more quintessentially ’90s tracks on 69 Love Songs—check out that sped-up trip-hop beat that comes to a gloomy grind at the conclusion. It wouldn’t sound out of place in a mix alongside Garbage and Blur. Despite the acclaim that 69 Love Songs received upon its release, this song’s potential as an indie dance song was perhaps overlooked.

What’s also interesting about “I Can’t Touch You Anymore” is the way the production mirrors the lyrics. There’s a sexy groove throughout that’s put on hold at several points within it, mimicking a second thought about returning to a lover who’s bad for you. With the refrain of “I love you, I can’t touch you anymore,” that’s all too perfect.