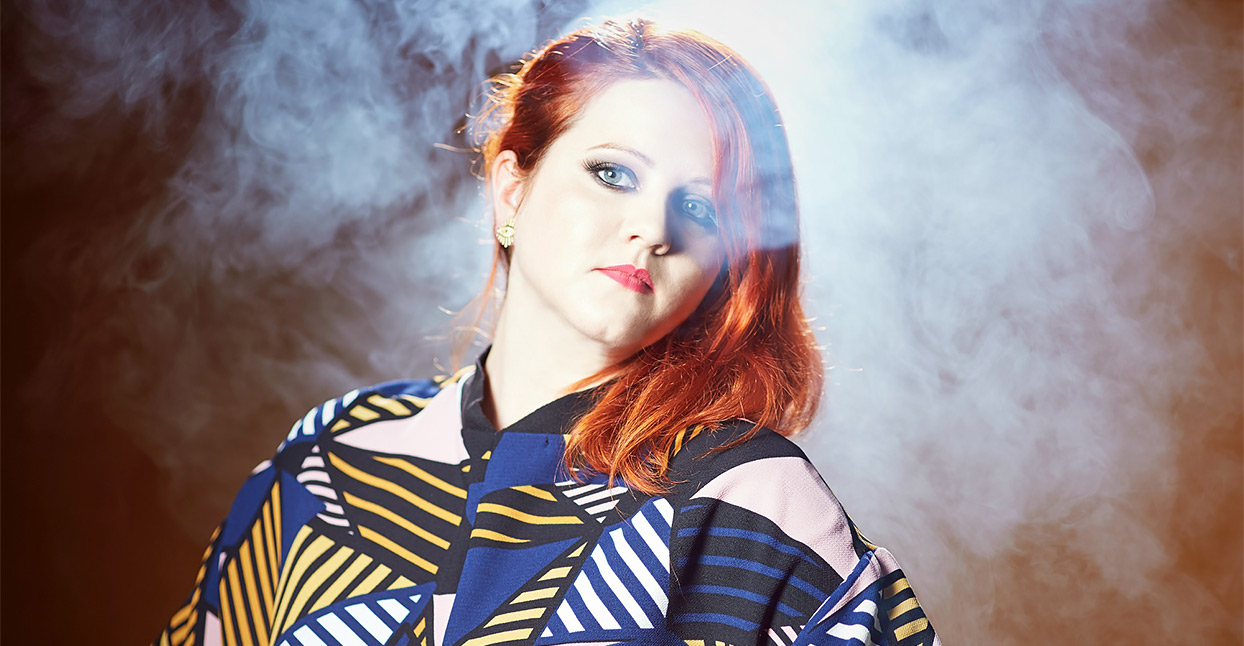 On Bad Humors, her first EP as Madeira, Kim Pflaum fills her songs with funk-inspired bass lines and bantamweight synths, formusic that sits halfway between disco and pop. The roots of that sound were clearly established during her previous gig as the front woman of Yumi Zouma. Having shepherded that band through two EPs of light dance pop—plus a gig opening for Lorde—Pflaum sounds wistful when she recounts the group’s history, even though she prefers not to dwell too heavily on the past.

“I wasn’t ready to leave at all,” she confesses via Skype from her studio in Auckland, New Zealand. “It was sad that I did have to. I can’t be so close to having all my dreams come true and not let it happen!”

The pressure Pflaum placed on herself resulted in a song-cycle that allows itself room to dreamwhile still acknowledging the darkness of reality. Pflaum’s voice floats like a pop princess and stings when she needs to get something off her chest. (Key lyric: “Took apart all I knew and tried again/ Only I thought this was real and it was going somewhere.”) As Pflaum explains, the final product mirrors the process.

What was your relationship with music like after leaving Yumi Zouma?

I went through a lot of emotional stuff all at the same time, so I pretty much couldn’t listen to music at all. I was completely spent. It was really sad, actually. It was really hard. Music has so much emotion and so much attached to it that it was too difficult for quite a while. I listened to some stuff, but it was old, familiar Wilco albums. I had to remove myself from the scene.

Did you immediately know you wanted to continue making music?

Yes. I’m very determined like that. I’ll push myself very hard. I wasn’t ready to leave at all. It was sad that I did have to. I can’t be so close to having all my dreams come true and not let it happen! So I was like, ‘I’ve got to get this together really quickly and turn something around in the shortest time possible, but still with good quality.’ It was all hands on deck. When you’ve had a taste it’s like, ‘Oh my God! I can’t give it up!’

Did it help the healing process to sit down and figure out how you wanted your own stuff to sound?

There were days where I couldn’t really do anything. I was just watching TV. There is something cathartic about processing everything in a lyrical form, I suppose. It was tricky, deciding which kind of style I would go with. It was really enjoying what I was doing. And obviously, you can still hear quite a bit of the influences inmy new stuff. It’s just a process that happens over time.

Did you think about forming a new band?

I moved to a new city at the same time. I just needed a fresh start from everything. I thought I’d move up to Auckland. It’s a bit more serious up here, music industry-wise. It was hard for me to start a band, because who would I start it with? I still need to make a lot of connections.

It just happened that an old friend who was also originally from Christchurch was living in the same area as me. I got asked to work on a song with the band Brett. So I just hit up my friend and was like, ’Maybe you can help me record this stuff.’ I hadn’t bought new gear or anything yet—when I moved to Paris, I sold all my worldly possessions! Once I moved back I had to re-buy everything and start over. So he was in the area, and he helped me produce the whole record. Which was really good.

Did you know he was in the area?

I had no idea that he lived in the same neighborhood. It just worked out that way. I moved to my grandparents’ old house, where they used to live when they were alive. So I moved into the bottom flat of it. And he said “Oh! I’m just around the corner.” Then it turned out he needed a place to live later on, so he ended up moving in with me and we built a studio space in one of the rooms, which is where I did the EP. There’s a lot of bush land around where I live as well. So it’s pretty flexible, noise-wise. Auckland is quite special like that. You walk forfive minutes and you have all this beautiful nature.

Where do you stand on the idea of fate? That you had to move and make this fresh start in order to make the music you’re making?

I don’t know! Sometimes I like the idea that things are meant to be, or not meant to be. But it’s really hard to accept it when you go through lots of shit. [laughs] It’s like, ’Whoa! Who’s out there in the universe getting angry with me?’ I think a lot of it, you have to take the chances and you have to make steps, and you have to make things happen—otherwise you’ll be waiting forever and it won’t happen. I’m quite serendipitous. I like chance meetings and things like that. But at the same time, sometimes you just have to buckle down and do the work.

Why did you decide to become Madeira instead of producing music under your own name?

I actually started working on Madeira music before I started Yumi Zouma. I started it as a silly side project. The music was going to be about vacations and going on holiday and people that worked at the resorts. People who work jobs in the most beautiful places, but they’re working, so they can’t enjoy it. It became escapist music. But then I was in Yumi Zouma. Afterwards, it was easy to go back to. There was already a bit of a story there, and I had something to go on. I prefer to go under an alias, because [this way] it can be a band or it can be just me. It’s a bit of both right now.

It seems appropriate that you have this escapist project you can go back to after all this emotional stuff happened to you.

Yeah, it is, actually. The music changed quite a lot. Maybe one day I’ll put out the other music I wrote. It’s a bit silly, but I still really like it. It was me doing it, so the image of being on an island and being alone, it all kind of works together. Maybe I’ll release it as a side project and hide it out somewhere and let it leak.

What does the title Bad Humours mean to you?

’Bad Humours’ to me is all the stuff that happened to me. All the emotions built up. Bad humours as the medical term. Just letting these bad feelings drain out of you by the form of blood letting. But I felt like writing the music was a similar process. I was getting it all out and putting it on paper. Letting it out in the world and letting me process at the same time. I’m kind of obsessed with archaic medical practices. I don’t perform them! I just read about them and how weird it all is and how far we’ve come. I should just carry a jar of leeches around wherever I go and just be that weird person.

How personal are you willing to get when you’re writing lyrics?

In songwriting that’s the trickiest part. Often I’ll write something and it will be too much or too intense. But some of the songs purposely have quite a lot of intensity to them. I quite like writing songs that have that juxtaposition between that poppy, disco beat and washy dreamy synths. But there’s dark undertones of quite intense lyrics. Saying that, sometimes I keep it light as well. But I like throwing in the odd phrase that’s a bit darker.

Was there a particular song on this EP that helped lead the way?

I wrote “Manipulator” first. It came out and was a lot darker and angrier. But I wanted to do something a bit lighter to help transition over. I wanted “Manipulator” to signal that I was going to get a bit more edgy and dance-y. I just had fun with it.

How do you protect yourself when music becomes more about commerce and less about art?

There are elements of that. Especially when you’re starting out you have to self-manage and be your own businessperson as well. It does become commerce. Even when I’m writing songs I try to strike a balance between making it personal and thinking about what will sell and what people will like. To a certain extent. But I don’t let it dictate the whole song. I don’t write songs purely to get them published or whatever. I guess it just goes on your mood. There’s no one trick. I’m making it up as I go along.

But I do try to train. I had some vocal lessons and my tutor was saying how my voice really wants to be washy and hold onto the notes and be soft and dreamy. But the music is very disco and the beat is tight. So I don’t have time to take the space to do anything fancy. But I quite like that there’s tension between the two different things going on.

It’s interesting that you wrote something that forces you to adjust and learn.

Yeah, that’s me in general. [laughs] I’m always pushing myself to do something a bit different.

How did you find the “Oracle/Horoscope” metaphor?

Part of the concept of that song is that we’re all living online. Our lives are very much like “I’m doing all these amazing things!” Facebook is this show reel of everything that is amazing. But then there’s that relationship side, where there are people who don’t want to commit to anything because they want to try everything out. I was trying to unpack that idea. Is it necessary to try out lots of different relationships and people and things? Or can you be happy with just a few? I’m not sure quite how I brought in the idea of the horoscope. But you read these horoscopes and they’re so generic and can fit anyone. It’s about the illusion of these things and being taken for a ride and questioning what’s what. It’s a complex song. Lots of ideas going on at once.

Do you feel like in that culture, can we ever really get to know someone when we’re dividing our attention?

It is tricky. It’s such a bizarre thing. You hear about people who have been married 50 years and they find out something new. There is this vulnerability and trust that comes into play. You don’t know this person completely. But they’ll stick it out. It’s quite scary.

I worry that hearing that, my knee-jerk reaction was “Can’t I just swipe left?”

I know, right? If only it was that easy. There’s a part in the video that just got released with a Tinder thing. I’m in this little club with my friends here in Auckland, called “Girls Who Date.” We all post stuff about Tinder dates, and how they went and how horrible the conversations are. All that painful stuff. It’s so true!

Is there more music on the way?

I’m just smashing out the music. Even when this EP was done I was still writing more songs. And I’m working on more. I have the time to do it right now—so it’s good to do it while I can.