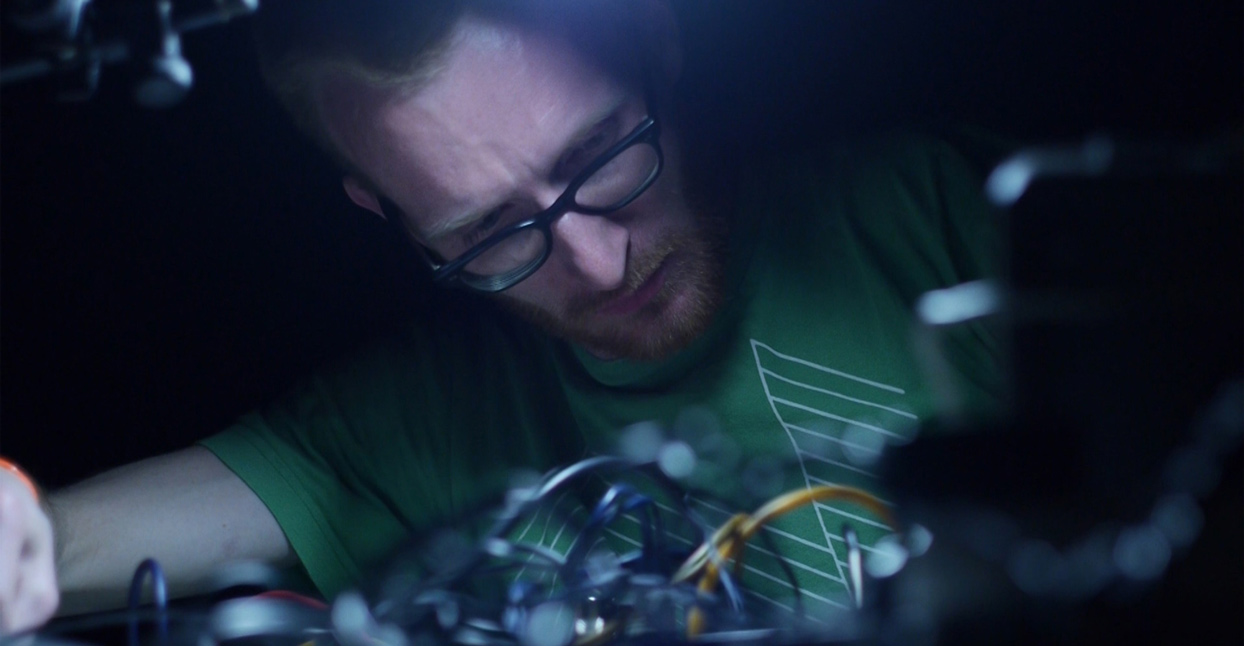 The name of Rutger Zuydervelt’s creative identity, Machinefabriek, conjures notions of futuristic industrial dystopias—but, in fact, it came from a rather unremarkable source. “The word, meaning ‘machine factory,’ was on a building that I passed each time I went grocery shopping,” he explains. The upside is that he now has a name that carries with it a kind of cold, imposing authority. The downside is that he’s now regularly approached by people wanting to invite him to things like forklift auctions.

But then again, maybe that could be a good sonic source for him. For nearly 15 years, the Rotterdam-based Zuydervelt has worked both under the Machinefabriek name as well as his own, releasing an almost daunting but also highly varied series of albums, EPs and singles. His work resists easy classification, ranging from louder explosions of sound to minimal murmurs. His stated emphasis is on ‘experimental electronic music,’ a term Zuydervelt says works as well as any, though he adds, “Terms like ‘experimental’ and ‘abstract’ are quite relative, and a lot of my music has an electro-acoustic aspect.”

We interviewed Zuyderfelt—by email, at his request—to talk more about his life and approach to work, as well as how Bandcamp has particularly suited his continually evolving discography.

Could you say more about how and when you began composing music?

When I was young, my parents sent me to piano lessons, and after a few years, guitar lessons. I think I stopped with that when I was about 15. A few years later, a classmate gave me the music software program FastTracker 2, and I discovered the luxury of being able to create music on my own, on my parents’ computer. Back then, I was listening to a lot of trip-hop, drum ’n bass and early Warp stuff. Recently, I found a box with old tapes of that period, and decided to put a selection of it on my Bandcamp page.

Though it doesn’t have much to do with what I’m doing now, the foundation was laid for Machinefabriek when I was studying at the art academy as a graphic designer. I got a mixing desk as payment for a design job. I started combining guitar with computer, and experimenting with effect pedals and drum computers.

What, in general, has shaped the development of your music over time? Is it a product of your continuing listening experience, experimenting with various sonic approaches, other factors entirely?

What influence[s] my music mostly is the music I’m listening to. It can be super inspiring to discover something you hadn’t heard before. Hearing Neurosis or Autechre for the first time for example, or finding out about labels such as Erstwhile or Wandelweiser—stuff that truly opened doors for me, not only as a listener, but definitely as a musician too.

But probably an even bigger influence is the creation of the music itself, in which I try to start with a basic idea, but always keep plenty of room for ‘happy accidents,’ and to surprise myself. That’s the most rewarding moment in the process, when things unexpectedly fall into place.

The same goes for my live performances, which are (most of the time) completely improvised. Then it’s even more a hit [or] miss situation, which makes it really exciting (and sometimes quite frustrating). I like the idea that the audience is actually witnessing the entire process (and failings) of music-making, instead of watching someone hit some laptop keys and play pre-recorded sounds. When a performance goes well, I feel a strong connection and intimacy with the room and the audience.

Though it’s not the same as being there, this is a good example of a gig that felt ‘right.’

Formal releases of work can be signposts or signifiers of much deeper work in turn — do you constantly record or experiment?  Is there a large archive of unreleased or unfinished work?  Or do you record with an eye towards conscious creation of particular albums, EPs and so forth?

I like my music to be well documented, so there’s barely any unreleased tracks in my archive. I mostly make music with the idea of an EP or album in mind, so unless they are compilations, releases are always a selection of tracks that’s made within the same time frame, and within the same state of mind. So you could say my creative process is very ‘project based.’

I love each album to have a specific idea at its core. It can be a limitation in the instrumentation used, or that each piece draws from a similar inspiration. Tracks on an album are always very connected. So I don’t necessarily see each album as a follow-up to the previous one (although that happens sometimes), but more as [the] start of a new process.

Collaboration has been one of your hallmarks over the years, working with any number of artists on joint projects.  How do you approach collaboration?  Are you normally the one suggesting or are you approached?

Most of the musical collaborations happen without too much talk beforehand. Obviously, whomever I’m collaborating with, we know each other’s work, and we have faith in the ‘outcome’. Sometimes I approach musicians who I admire, sometimes I get an invitation by someone else. With voice artist Jaap Blonk, for example, a concert organizer suggested [we] perform together. That was such a success that we booked a studio and recorded a few hours of improvising. I must confess that at first I felt a bit intimidated to perform with Jaap. I wasn’t sure if I would be able to ‘connect’ with his sounds. The result is much weirder than anything else I recorded, but in a good way; there was definitely some magic going on.

Another more prominent duo is the one with fellow Rotterdammer Michel Banabila. We released our fourth album [Macrocosms] last year, and each one is always made very quickly through file sharing, in a spur of inspiration. By now, I think we have developed a language in which loads of things are possible. This collaboration is like my playground for ideas, and I think we’ve done a lot of things I wouldn’t normally do in solo work.

Any other collaborations you’re especially proud of?

It’s an older one, but I’m particularly proud of [Box Music], the collaboration with American sound artist Stephen Vitiello, released on 12k in 2008. Stephen and I got in contact via e-mail, and swapped some records. We decided to collaborate, but not in the (sort of) standard way, so not with file sharing. Instead, we sent each other a box filled with objects, musical and non-musical. The idea was to use these objects (tapes, stones, tin foil, chocolate sprinkles, and whatnot) to create music with. It was fun and daring at the same time.

We did something similar when we were invited to play the send+receive festival in Winnipeg: we both brought a box on stage, and gave it to each other at the beginning of our gig. The unwrapping, and finding out what’s inside was part of the performance. We even asked the audience to bring something, and we got a plastic children’s slide on stage.

Another collaboration I’m quite fond of is Piiptsjilling. Maybe it’s better to call it a band, since it’s a four-piece, and we’ll be releasing our fifth album this year. Anyway, all our stuff is improvised, with poetry, voice, guitar and electronics. It’s very meditative, and we really get ‘into the zone’ when recording or performing.

Your most recent release, Assemblage, pulls together tracks from compilations and CDRs, so using that as a pivot: how do you see Bandcamp as a function of your artistic work?  Is it the main ‘clearing house’ for everything you’ve done?  What in particular appeals to you about the site?

Bandcamp made it so much easier to organize and sell my music. Especially ‘cause a lot of my music is self released, and with Bandcamp I have a platform to reach an audience for it. Before Bandcamp, people would email me asking to order something, but now everything is on [Bandcamp], that doesn’t happen anymore, and the process of selling and buying is way easier now. It would be problematic if Bandcamp would stop.

Is there a particular artistic goal you are striving towards that you have not yet achieved, but which you would like to see happen?

There’s a sense of purity I strive for. That sounds pretty vague, and it’s hard to explain. It’s either a matter of minimalism or purposefulness I guess. So many times I thought I would start a new project that would be super minimalistic, but then I can’t help myself and keep adding layers to a piece. Sometimes I hear music by others that’s so simple but effective that I wish I had made it. So I guess that’s something that’s always in the back of my head, but hasn’t materialized fully yet. And maybe never will. And maybe that’s what makes my music sound like my music?