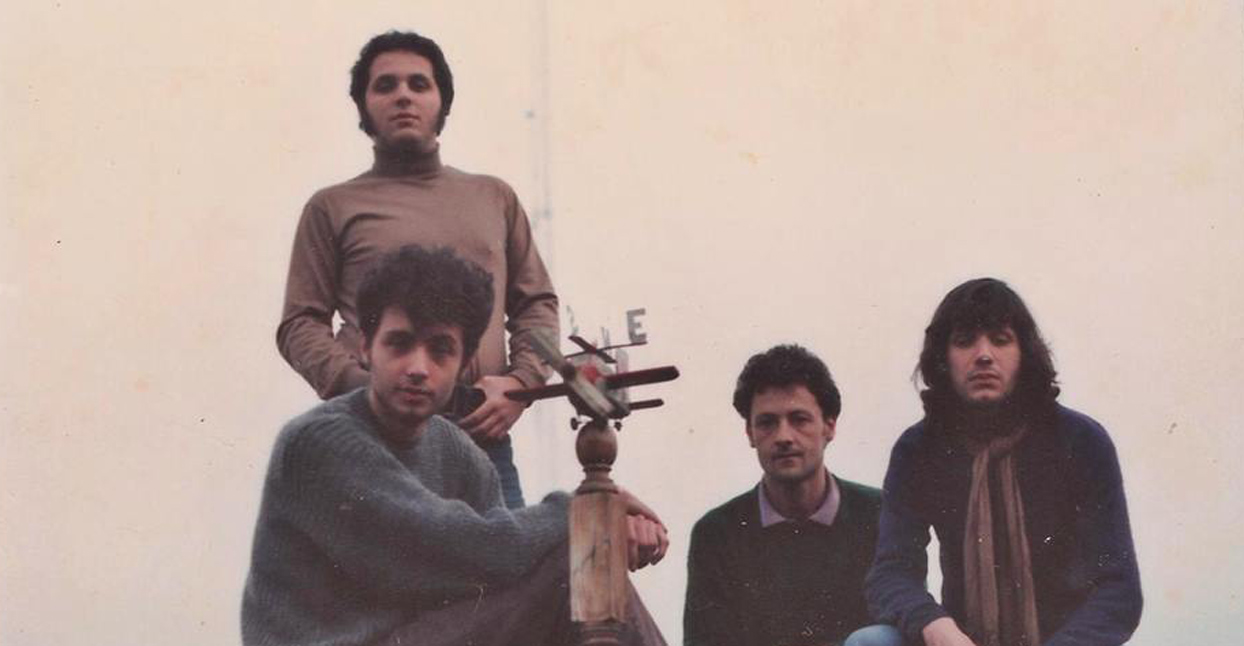 It starts like this: a kick drum reverberating in what sounds like a large open space, while a collective murmur becomes louder. There is the crackling of microphones, the sound of breathing, and then the toms start off the first song, “Conversaciones con la hierba.” This is the live recording of Argentinian rock group Los Pillos’ show opening for Siouxsie and The Banshees in December 1986—a console recording that remained unreleased for 32 years. Siouxsie’s visit was a milestone for shows in Buenos Aires, a connection to the thriving post-punk underground. Lesser-known bands like The Bolshoi, or poppier acts like The Police, had come through—but nobody on Siouxsie’s level. The show took place at the Obras Sanitarias basketball stadium, a covered arena that can fit just under 5,000 concertgoers. A show of that size, for a band of this scope, was a rarity.

Singer Adrián Yanzón remembers Los Pillos’ live support gig in ‘86 clearly. “We didn’t have a platform for the drums, so we had to set up in a line in the front so people could see all members of the band, and we played like that,” he says. “I remember we were convinced we needed to give a good performance. That spirit of finishing a song and starting the next one right away was pretty close. That year, we rehearsed to record the album in August, then we presented it at El Parakultural. We had the pressure of having our LP released, and that affected us negatively as a group back in ‘87; having to juggle making it as a musician and work obligations denaturalized our way of being.”

Los Pillos represent an awkward chapter in the history of Argentine rock in the ‘80s—too dreamy for the post-punk crowd, but too scruffy, poetic, and singular to be a massive pop product. The original edition of their first LP, Viajar Lejos, is a collector’s item, going on Discogs for upwards of $200. A 2016 CD reissue also features their second album, Nómades, where they changed their style, setting themselves even further away from their generational peers by reinterpreting the lyrical territory of early ‘70s Argentine rock. To put them in context within Latin America proves equally difficult, since, in most capital cities on the continent, the scene was divided between the new wave of mass-produced pop and underground music that hewed closer to punk in rawness.

“Those who managed bands wanted another Soda Stereo, a product like that. Not to underestimate them, but the art we made was very different, because we started somewhere else,” says Yanzón. “We didn’t plan to access the market, we didn’t have a clear idea of what the market was… [In 1986,] on stage, there were four scruffy guys, bearded, with their shirts open. Four guys, some more similar than others, that came together to record an album that we knew was gonna last in time. But something told us that it wasn’t gonna be massive: we knew that the message, the way of making music and poetry in the group was going to last, that it was gonna be picked up by other bands.”

“I found out about them as a myth, that is, after the band ended,” says Colombian journalist José Plata Manjarrés. “There were some bands like that in the region—such as Los Estómagos from Montevideo and Hora Local from Bógota, product[s] of their time but also ahead of their time, something that shows us how out-of-sync we all are.”

Both of Los Pillos’ albums are consummate artistic feats that have aged well, but the myth surrounding the group developed despite the band’s musical talent, having more to do with the disappearance of drummer Pablo Esaú and his partner, musician Mónica Vidal. Both disappeared somewhere over the Bolivian Amazon on February 1, 1990, aboard a small plane. Their remains were never found.

The interview experience is bittersweet for Yanzón—on one hand, the band’s prowess and legacy lives on, but on the other hand, talking about Los Pillos is like summoning ghosts. These days, he spends his days teaching theology, studying Hegel, and editing his own poetry books—and he’s playing music, but it’s not quite the same. “[My poetry is] very different than what I wrote for Los Pillos,” he says. “I add my curiosity for history, and for consuming lots of literature, philosophy, religion, and also to announce the reality that’s about to come. I more or less move in that field, and it involves being in contact with the womb where we all come from, and where history comes from—that’s my quest. I also have a project with Dante Sardi in which we do experimental music. I play guitar; it’s more instrumental.”

Agustina Vizcarra, singer of techno duo Balvanera, believes the live recording of the 1986 show only confirms Los Pillos’ importance. “I got goosebumps [listening to it],” she says. “I think the recording confirms that Los Pillos were a good choice for that show. I see myself transported back to that time—or rather to the idea of the ‘80s that those of us who didn’t live [then] have about that era.”

“We got to play that part, a link between the ‘80s and ‘90s,” Yanzón reflects. “That careless attitude, so typical of Generation X, was [almost] more in tune with the late ‘80s than the early ‘90s.” Recorded right after the military dictatorship and the Falklands War ended, Los Pillos’ music encapsulates the best intentions of a generation of individuals trying to transcend the constant reminders of mortality around them. Perhaps hearing this long-lost recording can then help fill in the myth of Los Pillos, turning them from collectors’ curiosities to living, complex humans, making music unique to their time and place that still resonates today.

-Hernan Muleiro, with translation by Evy Duskey and Pablo Damián