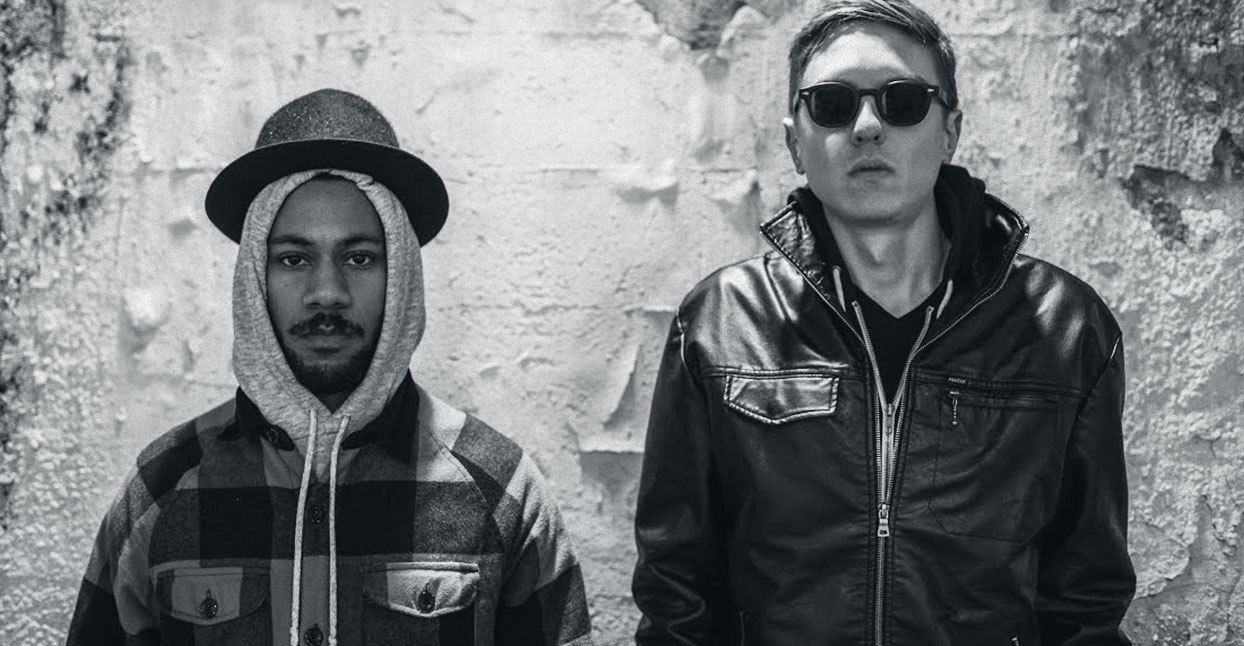 Even before they worked with each other on 2015’s The Night Took Us in Like Family, MC/beatmaker Jeremiah Jae and producer L’Orange had built up discographies that attested to their abilities to productively collaborate. For Jae, it was projects like 2012’s mixtape collaboration with Azizi Gibson Ignorant Prayers, 2013’s RawHyde with Oliver the 2nd, and an elusive 2010 CD-R with Chicago cult favorite Sharkula. For L’Orange, it meant pairing his noir-ish beats with rhymes by Kool Keith, Mr. Lif, and Stik Figa.

But the duo’s work on Family brought out the best in both of them—an exercise in keen-eared, sharply observant pulp-rap that felt perfectly suited to L’Orange’s dusky, crime-novel production style. When the two reconvened four years later to make Complicate Your Life With Violence, which centers around the mental toll of warfare, they found their chemistry as potent as ever.

“One thing about working with Jae that’s really nice is that I get to focus a lot on the tone,” says L’Orange, “whereas he gets to show me where the more specific [ideas] are going. My main instinct, when I was trying to make this album, was to create something that felt very paranoid, and almost a little haunting. I really enjoy leading with something that could almost be comedic, and then underscoring that with something very tense, because that feeling really matches Jae’s tone and content really well.”

Jae agrees. “I try to layer my music in the same way, and throw in everything from spirituality to pop culture to comedy to really deep moments,” he says. “There’s some stuff that’ll fly over your head, and some stuff that you’ll catch. All of that is just a part of my process. But working with this concept, it was just really something that I dove into, and it felt like… we don’t want to repeat ourselves.”

Complicate Your Life With Violence works well as both a companion piece and a sequel to Family, adding new shadows to its predecessor’s grim mood. “I really wanted it to be a lot of haunting guitar to make you sort of nostalgic or reminisce—almost lean into a little bit of that Vietnam era. In terms of my concept, or world that I was trying to build, it was sort of a fictionalization of war in general. And so to be able to borrow some aesthetics from World War Two to World War One and Vietnam to kind of create this caricature of war—being able to take the samples from different areas sort of adds to the tension.”

The new album also involved something of a growth process for the two artists. As Jae puts it, “The compatibility kind of grew more from the last record. We built a lot of our trust up on the first record—not really speaking much, and just getting into our own zone. [This time] we talked more, about ideas outside of the music itself—ideas about art and whatever. I mean, it was definitely, creatively, the first time I decided not to curse, or say the word ‘n—a.’ I kind of got to this point where I just felt like it wasn’t necessary anymore. I didn’t want to continue carrying these expletives through my voice, and it was something that I think kind of freed [me] up a lot, and gave freedom to just vibe out and use the words that fit the story and concept.”

L’Orange’s perspective is similar. “I don’t think we’re extremely social or naturally collaborative in a lot of ways. We can be, but in terms of my process of making music, it’s very, very isolationist. I really like to go inward and take risks that I couldn’t, or that I would be too self conscious to take, if other people were around. And so when I’m working with an artist, I try to get a feel for the environment that they feel most comfortable creating in, and sort of after [The Night Took Us In Like Family], recognizing how similar Jae and I were. I like to have conversations with him on the very abstract concepts… I like talking about his life and my life, what we have going on, and then talk about images and [abstractions]. So very rarely am I ever suggesting anything specifically. Allowing both of us to operate in a position we both thrive in, sort of being respectful of each other’s privacy while still tending to the collaboration, I think is the best growth that I that tracked from one album to the next.”

As for what drew the two artists together in the first place, there’s a history of mutual appreciation. We asked L’Orange and Jae to talk about a few of each others’ tracks and features that left the lasting impressions—including one that helped seal the deal in keeping the L’Orange/Jeremiah Jae collaboration going into its second album.

Jae: That was one of the first songs I heard outside of just hearing a beat of yours. At that time, 2014, I wasn’t hearing so many people with that style of production and just taking it to some different places creatively, just free and traditional at the same time. That old-school feeling, but something like ‘What is this?’ It really made me just interested in hearing more, and I think with every beat he sends me, I’m always like ‘I just want to hear, like, ten more.’ That was one of the tracks that sparked that interest.

L’Orange & Jeremiah Jae
“I Was Invisible Nothing“

Jae: That is my favorite track on that record, and one of my favorite beats to this day. And I think the beat changed [over time], so hearing [the album version], it was almost as like I was like hearing a remix. It was just like hearing how you were matching the [lyrical] tone just like perfectly, and it really just elevated what was already there to a different level. And that’s one of my favorite remix beats that you’ve done. Sorry for cheating.

L’Orange: This one is like, if you can balance aggressiveness with with being romantic, being able to combine these vaguely oppositional emotions into into one cohesive song… this song isn’t just dope because the beat knocks, and it’s not just dope because I remember that one line. It’s complex. There’s a lot of depth to that song, because the flow is not hooky and the beat is not like something that gets stuck in my head. But the combination is a song that I just kept returning to, because of the depth.

Jae: I’ve always been a fan of Kool Keith and Ultramagnetic MC’s, Dr. Octagon… so [this] collab kind of blew my mind that it even happened. It was like the perfect combination. I think with his style, that production… always growing up, I wish certain artists collabed with other artists—you know, Kool Keith and J Dilla, or Madvillain and Kanye West, whatever. But then that was just one of those where, as a fan, it was just dope seeing you guys do that.