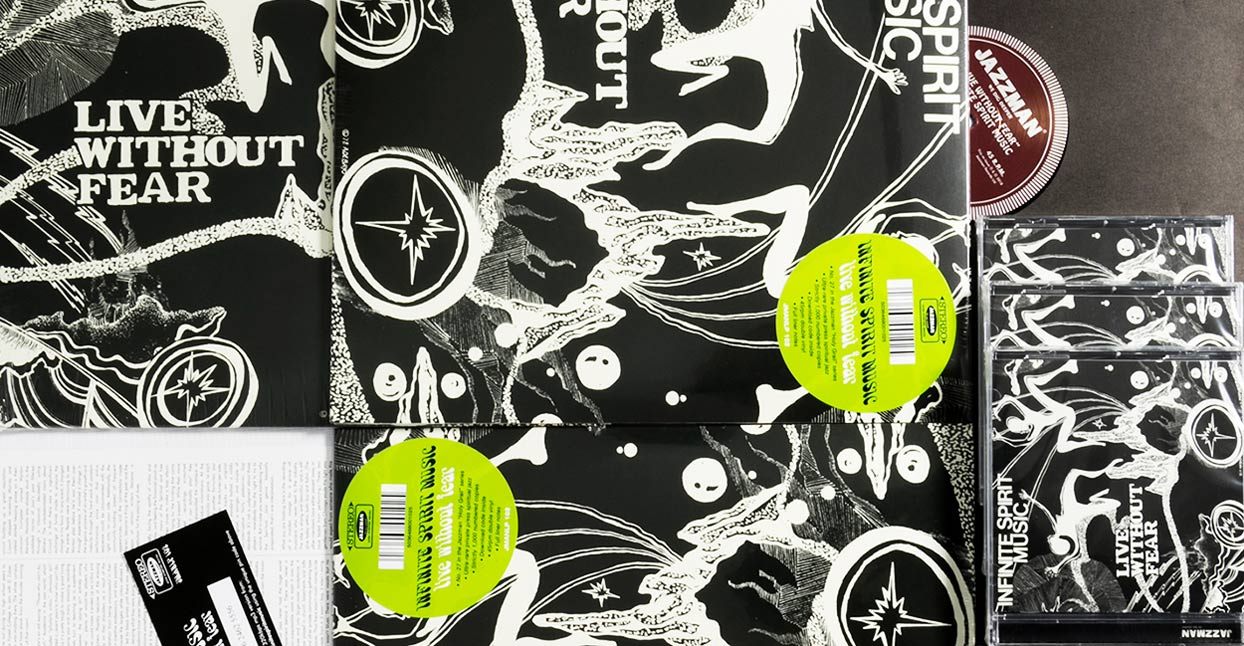 On May 31, 1979, a group of young musicians—performing under the banner Infinite Spirit Music and led by pianist Soji Ade (sometimes credited as Soji Adebayo) with conga player Kahil El’Zabar—took three cars from Chicago to the Soto Sound Studio in Evanston and, in a single day, cut Live Without Fear. In those few hours, the band mapped a sonic world without borders. The album was a bold expression of spiritual jazz, indigenous rhythms, and thoughtful Afrocentrism; every vibration feels touched by the spirit of Sun Ra.

Like a lot of locally cut records at the time, Live Without Fear was released without much support and quickly became lost in time. Now, via Jazzman Records and its Holy Grail series, the album has been excavated for reissue, filling in a little piece of Chicago music history and belatedly showcasing the set forged by these hip young virtuosos.

“We were all similar in age, young guys who were listening to a lot of music,” remembers El’Zabar, speaking over the phone four decades later. “It was a goal and aspiration and ideal to be spiritually connected to the music you play, the musicians that you played with, and the community that listened to it. So it was, without being cliché, a very natural idea. The idea of the music for Live Without Fear, Infinite Spirit Music, was all in that sense of aspiration, so to speak.”

The album intertwines various strands of 20th century Chicago musical history. Take El’Zabar himself. A native of the city, he came up rubbing shoulders with greats like Chaka Khan (once married to El’Zabar’s childhood musician partner Hassan Khan). El’Zabar lived across the street from legendary jazz composer Roscoe Mitchell, and counted Earth, Wind & Fire horn players Don Myrick, Louis Satterfield, and Rahmlee Michael Davis as his friends. He played with cult soul star Baby Huey and his band The Babysitters, and shared bills with jazz legends like Alice Coltrane and Pharoah Sanders. It was a period when the city boasted a sizeable audience for all forms of Black musical ingenuity.

“At that time, this music was being played on the radio,” says El’Zabar. “There were large audiences across the hippie community, the so-called Afrocentric community. Everyone felt that the music had importance when it came to lifting the spirit. That was the energy [of] Infinite Spirit Music—not to be afraid, to live without fear, to go for what you believe in.”

El’Zabar attended Lake Forest College while Soji Ade went to nearby Northwestern. The genesis of their group came when the two young musicians arrived in Chicago at around the same time. The pair would hang out, driven together by a mutual love for art and music. “We talked about spirituality and connecting that lifeforce to the music, community consciousness, and stuff like that,” recalls El’Zabar. “There was synergy and compassion for many of the same things so we felt it was important to collaborate.”

The group that assembled to record that summer day in 1970—described by Ade in the press notes as a day that “smelled good and spoke all day sunshine”—included multi-instrumentalist “Light” Henry Huff, bass player Mchaka Uba, percussionist and one-time member of the Sun Ra Arkestra Aye Aton, and vocalist Ka T’Etta Aton. In this case, nice weather fueled positive music. The enthusiastic chants of “Father Spirit, Mother Love” asserts the buoyancy pulsing through this young group’s worldview; the constantly shifting rhythms of “Bright Tune” speaks to the avant-garde but is propulsed by peppy rhythms. Lengthy percussion solos sit alongside smooth lounge jazz arrangements throughout the album. Yet Live Without Fear isn’t an exclusively sunny piece. The short, nearly a cappella vocal on “Soul Flower,” for instance, has a kind of doomed beauty to it.

He continues, “We weren’t mimicking anybody else—we were taking influences and reinterpreting them as our own. It was that kind of confidence and thankfulness that everybody had. Like, ‘Yeah, this has got something.’”

“The beautiful thing about these guys is their modesty and earnestness,” adds Gerald Short of Jazzman Records in an email. “They make music for the reasons it should be made, to communicate a message of peace and good feelings to those that hear it. There’s no compromise to commercial values. They don’t bend to trends and fashion. It’s pure art.”

Live Without Fear was manufactured, LPs were sold and distributed around the local scene, and that was that. There are no hard narratives around why Infinite Spirit Music failed to find an audience outside of hardcore Chicago jazz fans. The stacks of private records of this type were often made spontaneously, and didn’t fit in with some kind of master plan.

“There was no marketing hype, no promotional budget, no record company backing, no commercial pressure,” says Short. “Just some musicians and the music they made together.”

Ade has remained musically active. In 2008 he released the spiritually engaged album Asase Yaa and he currently performs live with Sura Dupart and the Side Pocket Experience. El’Zabar is currently preparing to release a new album with his long-time band, the Ethnic Heritage Ensemble. Almost simultaneously, one of his earliest records will be made available for reappraisal. But Live Without Fear is more than that. It’s a sonic footprint of an exciting time in Chicago music, marked by young cats who walked the Second City’s streets with a sense of wonder and motivation for ingenuity.

“All the young musicians, you were challenging each other’s skills and techniques and discussing history. It was enormous stimulation that I believe created epiphany across various genres. Whether it was Earth, Wind & Fire or Sun Ra, they were all speaking to spirituality, community and human upliftment through music,” says El’Zabar.