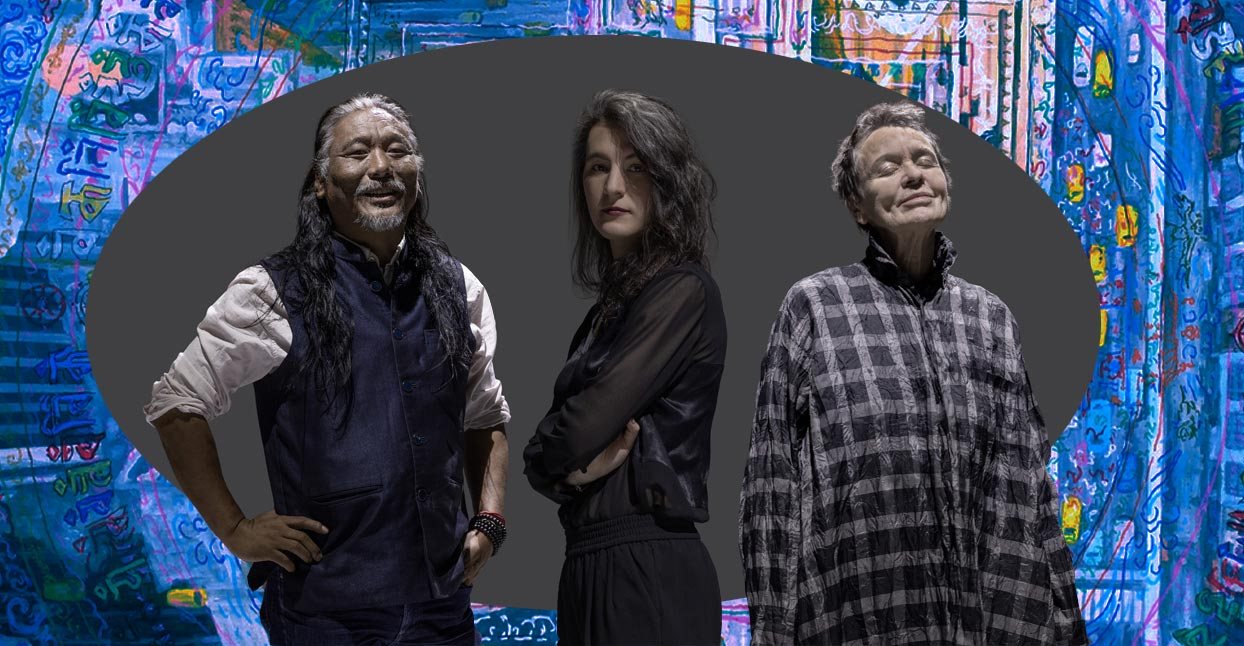 Laurie Anderson is not optimistic about the future. The planet is on a path toward total ecological destruction, and Anderson is not sure we can return from it. She’s horrified at the ways politicians turn victims of gun violence and the concept of never-ending war into cheap political pawns to be manipulated for their own advantage. Even so, she’s still thinking about utopia.

Songs from the Bardo, her new collaborative album with Tenzin Choegyal and Jesse Paris Smith, accomplishes that end; the album is a calm and frank rumination on mortality. It’s the latest in a long string of works by Anderson (including 2011’s Forty-Nine Days in the Bardo and 2015’s Heart of a Dog) that are connected to The Tibetan Book of the Dead, a guidebook of sorts about consciousness, death, and rebirth.

“I love things that have a point of view, and that also have the potential to help people,” she says. “This is a very, very hard time to be alive. I found that those texts, for me, were really helpful.”

Songs from the Bardo began as a largely improvisational performance at the Rubin Museum of Art in 2014. The album, which Anderson says was also mostly improvised, unfolds at a slow, deliberate pace. Tumbles of percussion tangle with singing bowls, violin, and traditional Tibetan instruments, while Choegyal chants or Anderson reads text excerpts from The Tibetan Book of the Dead. The album’s guiding principle is one Anderson has found essential to her practice as both a Buddhist and a multi-disciplinary artist.

“When I’m working on a piece of music or a painting or a sculpture or some ideas or writing, I try to use what I know from both of those disciplines, which is to pay attention,” she says. It’s also important to her to try to remove her own ego from her work. “When I try to understand why I do things, what’s the wind that’s blowing my sail, I have to say it’s to become nobody and nothing—to become as transparent as I can, somehow.”

For Anderson, that means trying to escape the extreme pressure that accompanies life in the 21st century. To that end, Songs from the Bardo feels like an escape, an opportunity to spend 80 minutes in quiet focus. Its spacious arrangements encourage the mind to wander, while Anderson speaks in a calm, even tone, cautioning against distraction, fear, and bewilderment. “Listen,” she intones on “Awakened One.” “Now the pure luminosity of death is dawning upon you. Recognize it.”

Acknowledging that death remains an uncomfortable subject in Western cultures, Anderson notes that confronting its inevitability is  a helpful exercise in understanding ourselves. She points to the 2013 death of her husband, Lou Reed, as an especially powerful moment of learning.

“I was able to really experience and be there 100%. It’s a door that opens up, and if you don’t walk through it, you’re going to miss a lot of things,” she says. “You may not be able to have that experience again until you face your own death, which you may be so ill-prepared for that you’re like, ‘What? Me?’”

Throughout her life, Anderson has been a visionary leader in exploring new possibilities that lie in the intersections of music, technology, writing, and visual art, and she’s troubled by the ways that abrasiveness and cynicism have increasingly become normal modes of approaching creativity—and life in general.

“When an emotion like love becomes the avant-garde, you know you’re living in a world where it’s gone pretty wrong,” she says. Yet even amid looming darkness, Anderson finds room for uplift on a granular level, in building intimate community and in small acts of compassion. She may not be optimistic, but she isn’t hopeless, either.

“[Kindness is] a huge gift to give to someone. It’s not a big deal to just listen to someone for a second, and be a little bit kind,” she says. “How hard can it be?”