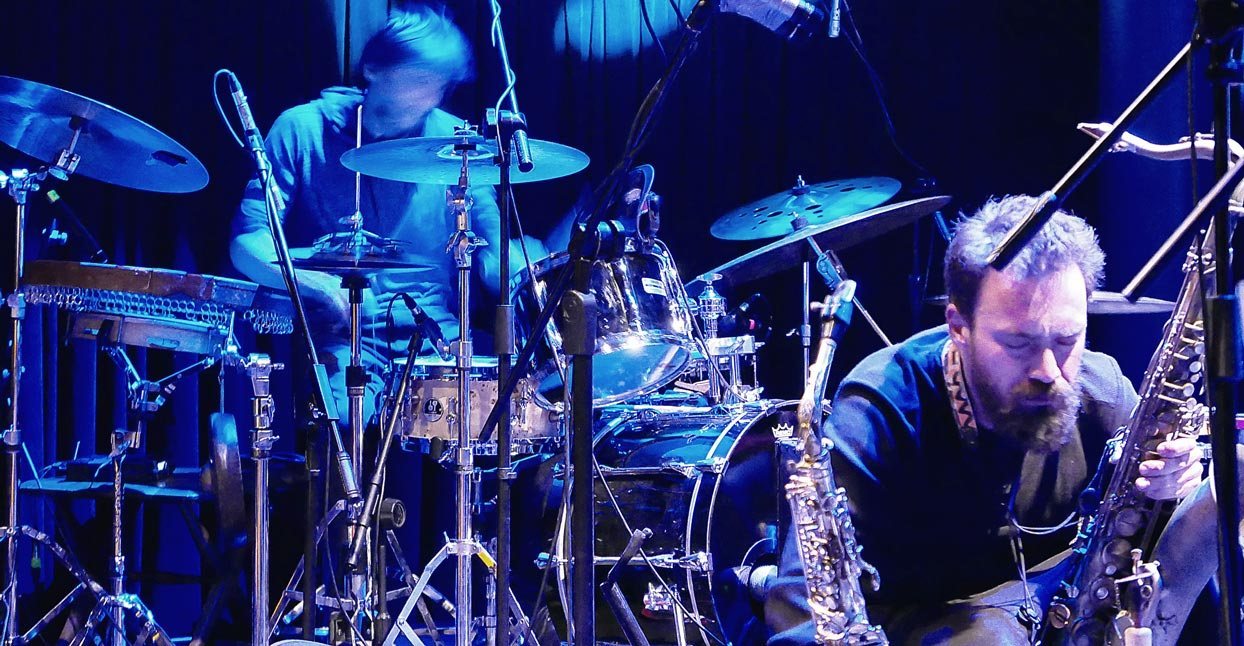 Life in Turkey is tough these days, and likely to get tougher now that President Tayyip Erdoğan has been granted sweeping new powers, is instituting hard-right authoritarian policies, and has been arresting dissidents and journalists.

“Things have never been easy in Turkey for anybody with an open mind, and it won’t be easier from now on,” says Konstrukt co-founder Umut Çaglar. “We as a band never had any financial relationship with or expectation from any corporation or government, so the key element is to stay independent to be able to survive in these dark days.”

Still, artists are going to do what they’re compelled to do, and for over a decade, multi-instrumentalists Çaglar and Korhan Futacı, plus a few different rhythm sections, have been making fascinating avant-garde jazz as the founders and leaders of Konstrukt. The ensemble formed in 2008, and their music has been a constantly evolving mix of free jazz, electronic experimentation, and traditional Turkish instruments ever since. At times, their work embraces the flutes-and-percussion combo of Don Cherry or the Art Ensemble of Chicago, with additional electronic elements reminiscent of the early 1970s work of the Sun Ra Arkestra, or Miles Davis’s 1975 band as heard on Agharta and Pangaea. Until recently, most of their catalog was available only on limited-edition LPs, with one or two titles popping up on CD.

“I must admit that I am a vinyl addict,” says Çaglar. “I do not collect CDs or listen to the music from my computer or cellphone. Although a few of our records were released through digital platforms, wider reach or availability is not our concern, as we believe the decision of doing limited/boutique release policy tells you what we are after.

“There are a few cornerstones which shaped the characteristics of the band through the years,” Çaglar continues. “For example, to meet and play with [Turkish drummer/percussionist] Okay Temiz in 2014 definitely made us aware of our own culture and sounds. The decision to include traditional instruments in the rig was the definite result. I won’t mention all the names we played with during 10 years, but every new guest was a new challenge for us, it shaped our perception beyond imagination. Nowadays, Konstrukt’s identity could be easily defined as ‘flexible.’ Whoever we encounter, we have always something to say.”

The number of high-profile avant-garde jazz and improvising musicians Konstrukt have played with over their first decade is genuinely striking. The list includes Marshall Allen of the Sun Ra Arkestra, Peter Brötzmann, Joe McPhee, Thurston Moore, Evan Parker, William Parker, and many others, including numerous prominent Turkish players. Some, like Brötzmann, are famous for sounding like themselves no matter the context, while others are more open to true collaboration. No matter what, Çaglar and company are ready.

“We never try to dictate our sound world,” he says. “Those gigs or recordings with guests are a result of meltdown as much as possible. As with the Brötzmann example, some players are more dominant sound-wise. But when we consider Marshall Allen and Joe McPhee, it is always smooth like silk regarding communication and finding common ground.” 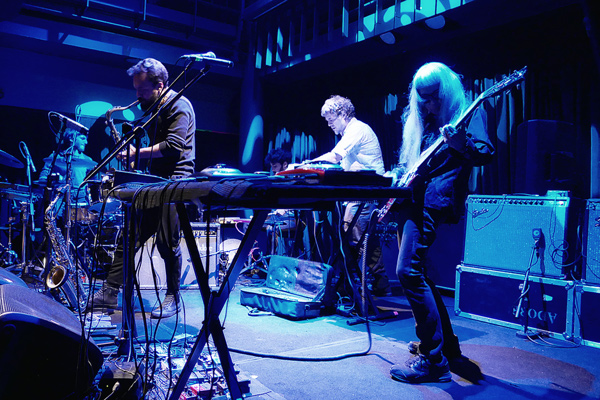 Konstrukt’s latest collaboration is one of the most exciting to date, as it takes them out of the realm of jazz, however free, and into a whole other dimension of weirdness. They recently made two albums—one studio, one live, but both bearing the exact same title—with Japanese avant-rock/art-noise titan Keiji Haino. The music contained on the two volumes of A Philosophy Warping, Little By Little That Way Lies A Quagmire, particularly the studio album, represent a breakthrough for both Konstrukt and their guest. Among the squalling reeds, clattering percussion, zapping and chirping synths, and heavy echo, some surprises emerge.

The first portion of “All Things Will Be Reduced To Equal,” the three-part track that makes up the studio album’s first half, is set to a pulsing motorik groove that calls to mind Faust’s 1972 collaboration with Tony Conrad, Outside The Dream Syndicate. Haino contributes his trademark possessed vocals and scorched-earth guitar throughout, as well as the occasional bit of ritualistic percussion.

“We made a small talk in the studio with the master about how to develop the ideas,” Çaglar recalls. “The first thing he said was, ‘I am not a jazz/improv musician, I am simply a rock musician, so let’s think in terms of songs.’ But those structures were created with various forms and musical decisions. We simply put a limitation of time, we tried to conduct the music by choosing the leaders for each track, that’s how we maintained the diversity in moods; also I must confess that Haino-san can play ‘jazz’ and sure can ‘improvise.’”

The connection was made through Haino’s manager, who was a longtime Konstrukt fan who had bought every one of their prior releases and even written about them on his blog. Saxophonist Akira Sakata, who had worked with Konstrukt in the past, also spoke well of them to Haino. They worked with a translator throughout his five-day stay in Istanbul. “We were aware that if we would fail to understand each other, even though Haino-san can speak a bit of English, the creative process would be in danger. [The translator] not only spoke very fluent Japanese, she also had a knowledge of deep musical terms, so we found ourselves in a comfort zone in terms of communication,” Çaglar says.

The music all feels of a piece, whether recorded in the studio or onstage. The live album may be slightly less structured, but the mood is incantatory and almost trance-inducing, as though the four members of Konstrukt, and Haino, were all transported to some other plane from which the echoes of their interactions traced back. Perhaps this is why they chose to give both albums the same title.

“I think it shows and proves that all the gathering, studio and live, meant a musical journey for both parties rather than just recording and playing,” says Çaglar. “Even if the music differs from one point to another when played live or in the studio, the end result was a musical language created by a group of men during those performances, a fresh and unique ground which is inimitable by others. In my opinion, Haino-san’s decision declares that those two releases are one musical meta.”

While the two volumes of A Philosophy Warping are definite career high points for Konstrukt, their second decade promises to be as adventurous as their first. They have plans to work with Otomo Yoshihide and Ken Vandermark soon, but as Çaglar explains, “It is impossible to tell who would be the next, as we never plan ahead. Personally, I also like the element of surprise, so when there is a guest with far less predictable quality, I feel more excited with the challenge.”

The biggest challenge the group faces, of course, is survival. While Turkey has had a good reputation as a home for jazz and experimental music, it’s hard to say how long that will continue to be the case. “There are a few local bands and musicians who try to make music with an avant-garde/experimental approach and there are a few venues who support these kind of bands, mostly without budget or with a deal for door money,” Çaglar says. “But the audience seems rather small in order to survive financially. Konstrukt’s biggest opportunity was to be able to perform abroad since 2011. Otherwise, it would be impossible for us to go on for 10 years.”