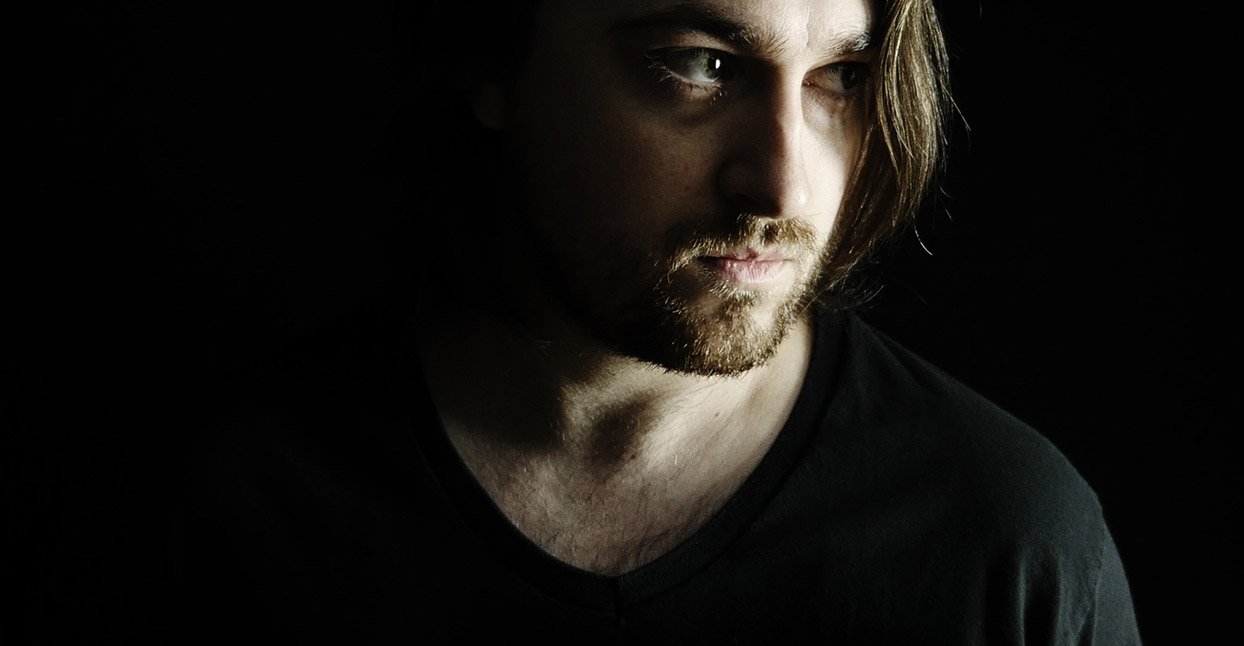 “The song “Possession” was written about my friend who got somewhat possessed in that house.” —Michael O’Shea

Michael O’Shea is comfortable in the darkness. The music he makes as Kinjac exists in shadow, using the structures of industrial and dark ambient music as a backdrop for investigating life’s tragedies and big, unanswerable questions. On his latest, Broken Mirrors, O’Shea scales back the pummeling assault of his previous records in favor of songs with shadowy, plunging melody lines, lit up briefly by sharp streaks of synth. Part of Mirrors’ shadowy disposition comes from its creation: written while both O’Shea and his wife were losing their fathers to cancer, the album is shot through with a crushing awareness of mortality. What’s more, much of it was recorded in a haunted house, one where a friend O’Shea’s experienced an actual possession.

We spoke with O’Shea about his unusual upbringing, what it’s like living in a haunted house, and the imagery in his new video, “Shattered.”

Your dad was a new age minister? I’d love to hear a little bit more about what that entails, and how it shaped your upbringing.

I grew up in Asheville, North Carolina, which is kind of a hippie enclave. A “new age minister” is kind of an offshoot of Christianity—basically, it’s a lot of hippie stuff. I grew up around people who do reiki and tarot readings and that kind of thing. I was also home-schooled for all of elementary school, so I was just always around that kind of a scene. Outside of Asheville is a real redneck, Confederate-flag-type situation, so I think my parents homeschooling me was their way of making sure I was growing up with positive influences, instead of teachers who were, say, still on the fence about evolution.

My dad taught Buddhist philosophies. In fifth grade, I was reading Howard Zinn’s A People’s History of the United States. It’s just a different perspective when spirituality and mysticism and stuff is common in everyone you grew up around. I was hanging out at ministers’ conferences with a bunch of people who had masters degrees in theology, talking about philosophical concepts. Which definitely influenced me—I have a degree in philosophy, which is probably directly related to that. Maybe teenage rebellion in some ways—I decided to study logic, nihilism, get into Nietzsche…

I’ve come back around a bit. By the end of my philosophy degree, I’d written my thesis on Deconstructive Derridian linguistics, and a lot of the people I was studying had a serious existential bent. That logic breaks down pretty quickly, I think. And as I was getting older, I was having more mystic experiences. It becomes hard to logically explain away ghosts when you live in a house where half the people who come over experience something. So I’ve definitely come full circle. I’m probably more closely aligned with my parents now than I’d like to admit. The main difference is that I have a darker edge to things. I think in their hippie, new age circles, there’s a lot of emphasis on positivity and positive thinking—if you just shut things out, negative emotions will go away. And that works great if you happen to be upper-middle-class and white and live in a good neighborhood. But I think it seriously ignores the times when things go wrong.

What were some of your earliest experiences making music? I’m asking because you make the Kinjac records yourself, you produce them yourself, you play everything on them—that takes a certain kind of temperament.

I have no formal musical training. I had six months of drum lessons, and that’s it. I grew up playing with the church band whenever I was forced to by my mother. But it wasn’t typical “church music”—one of their favorite songs was an instrumental cover of “Stairway to Heaven.” They were a bunch of old hippies, so it was a lot of ‘70s rock and the folkie, neo-spiritual stuff. I bounced around a lot between instruments. My mom tried to teach me piano, but as a child I didn’t want to because my mom was forcing me to. She’s a classically-trained singer, so vocal training was important, but I was really happy when my voice changed because then I got to get out of doing that. I tended to pick up an instrument for long enough to get good enough to play in front of people, and then I’d quit. I finally picked up drums because my mom couldn’t play drums and couldn’t give me lessons [laughs]. But they were always super supportive. And I grew up with a home studio, because my mom recorded albums.

The stuff that always caught my attention was stuff that blended electronics with instruments. I have synesthesia, so what I was attracted to when I was younger was hearing a lot of different sounds. That’s one of the reasons I got into production, because I wanted to control the way things sound.

So, tell me about the haunted house.

The house had been in the family for like 30 years. I’ve rented it a few times in my 20s for about a year-and-a-half at a time. This last time, my wife moved in with me—though she wasn’t my wife at the time, we eloped on Halloween of last year.

The house is super creepy—it’s not “ghost” haunted, it’s more that, when you live in the Southern Appalachian mountains, there are just otherworldly things throughout that area. There’s just strange shit that lives in the mountains that I don’t really know how to explain. It was more in the land, the house was just in the way, and they would get trapped there. Half the people who would come over would have experiences with it. The song “Possession” was written about my friend who got somewhat possessed in that house. He suddenly got extremely angry, almost violent toward me. And then we walked into a different room, and he was fine. But as soon as we went back downstairs, he got weird again. And then we started hearing all of these crazy noises going on downstairs. We almost left the house, and then it stopped. It was visited by Cherokee medicine men twice, but that didn’t seem to do much. I don’t know—I don’t like to get too into it.

I moved back in after my dad died. I was only intending to stay there for a minute, but then I re-connected with my wife. We were supposed to move to LA a year ago, but her dad was sick for a year and a half. Both of our parents were diagnosed with cancer the same week. We didn’t know each other at the time. We met in college, but hadn’t really been keeping up with each other. Then I saw on the internet that her dad was diagnosed, so I sent her a line saying “My dad’s in the hospital right now. How are you doing with everything?”

What sets Broken Mirrors apart from your other work?

There’s a long gap—I put out Moths a while ago during a really chaotic time. I’ve done a lot of music for other people, but I hadn’t done a Kinjac album in a while, and it’s been interesting to see how the other stuff I’ve been working on has changed things. It’s a very restrained album, and that’s because the album is coming off of this really dark couple of years. I had a lot of death in the family—six months before my dad died, my sister’s best friend died at 19. The last three years have been kind of a weird time. It’s a somber album. It deals with this whole concept of reflections of ourself, trying to get a take on who we are, and how all of the people we surround ourselves with are reflecting back on us in some way and defining us. A lot of people are broken on their own. That’s kind of what “Shattered” is about.

Let’s talk about the video for “Shattered.” Can you talk me through the concept there?

I probably shouldn’t have done a video for this song, because it’s so dark. It’s dealing a lot with binaries. Everything in the video is symbolic. The beginning takes place in an old once-grand Victorian house, which represents society and structure and the concept of “inside space” versus “outside space.” The ballet is symbolic of how constricted we, especially females, are in society. There are all of these rules for them. Ballet is something where you’re expected to be absolutely perfect. There is an objective definition to what “perfect” is, and if you’re not this very specific body type, you can go fuck yourself. The practice of it will destroy your body. So it’s one of the best representations of a very Western, “civilized” art form that doesn’t really use much humanity. I respect the art form on its own, but what it symbolizes in the video is structure at the utmost, this idea of perfection that will ultimately destroy you.

So this person is in this structured inside space, doing this structured art form, and eventually, I walk up with an axe and shatter this reflection of them. I represent the unforeseen breaking event—I didn’t know my dad was going to die, for example. They’re the unforeseen things that destroy where you were going. In this case, the whole moral of the story is that at the end, the dancer wakes up in the woods, an outside space, after this very free-form dancing. The blood in the video represents a rebirth—you’ve gone through this traumatic event, thought this breaking point, you’ve accepted the dark side, the chaotic side, the natural side, and you collapse into the darkness and come out on the other side stronger.

Darkness happens. There’s no getting around that. But when you accept it, you grow stronger for it. And I loved that my wife was able to be in the video—to have a female character instead of me playing that role, because there are these insane standards of beauty and perfection that we put on women. The song and the video are about getting rid of all of that—breaking free and killing off the constricted part of yourself.