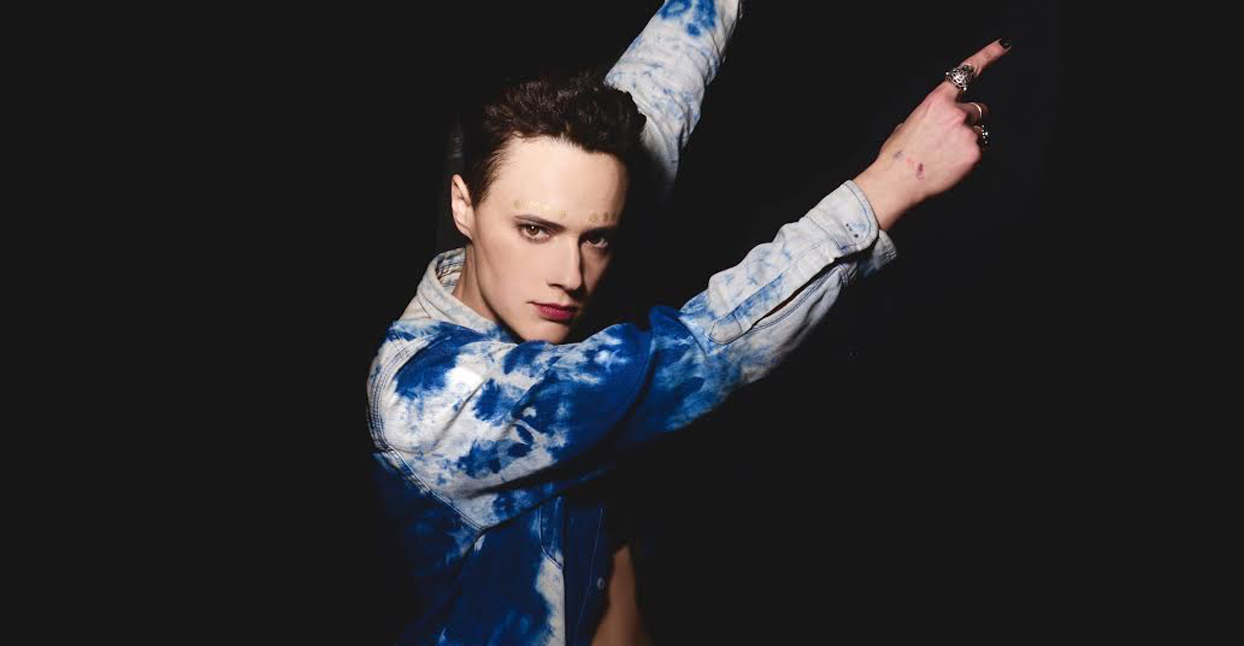 Kalbells’s new album, Ten Flowers, is a pop record hell-bent on redefining how far its structure can be pushed without giving way entirely. Its songs have a joyous, almost cartoon-like feel, the host of bells and whistles a vital part of the record’s aesthetic palette. The album’s joyous nature derives—at least in some degree—from Kalmia Traver’s victorious fight with cancer. We spoke with Traver over the phone from her home in Brooklyn to discuss randomized songwriting, collaborating on starkly personal projects, and trusting oneself fully.

Ten Flowers is your debut solo album. Why is now the right time to put out this record?

When I was writing the music, I definitely did not have any intentions of releasing it in any way. If I had thought of a good time to do a solo LP, it would have been…not now [laughs]. It would have been some unforeseeable time in the future. Magic just kept happening around it. I sent it to Toby [Aronson] from NNA Tapes, who’s been my friend for a long time, and he really loved it. He kept encouraging me to continue working on the music and get the album finished. At that point, the songs were all minute-long demos. That was about three years ago. So it’s really been a birthing process.

Have you been working on more music in that three-year period? I know you had an awful battle with cancer as well.

All of the writing happened about a year after I was declared cancer-free; I was going to check-ups regularly and doing a ton of work with my other band, Rubblebucket. We were touring and recording and being really busy. When I finally knew that I had a whole month free in January, I grabbed it and started writing. I gave myself some breathing room to be totally creative. I’ve been writing for Rubblebucket my whole life, so it felt cathartic to remove that one limitation. I put the limitation on myself, though, that the music I was working on couldn’t be for Rubblebucket. Writing the album was a big part of my healing, because the record is so much about detoxing and letting your body and your cells express what they need to. That period of writing was pretty transformative for me.

I actually wrote two albums worth of music and I’ve been producing the other half of it with my friend Jeremy Malvin, also known as Chrome Sparks. We’re gonna be putting music out, too. We’ve been in a long-term collaboration as well.

What are the discernible differences in your approach to Rubblebucket versus your solo work?

It’s funny, I really used the sonic palette of instrumentation that we had going with Rubblebucket in my solo writing, but the concepts are different. I’d done so many shows that I knew what to expect on stage, what the crowd would do and how they would react. I had been really used to writing songs that could easily be played by a band. With Kalbells, I wanted to take that away.

Somebody who was subletting my apartment left this little synthesizer, which is called the Critter & Guitari Pocket Piano. It’s a really, really cool beloved little toy. I started playing around with it at the beginning of my process, and that became my central writing tool. It makes these really crazy arpeggios that are almost impossible to recreate. It makes random, really fun sounds. I leaned into that as a way to place myself in a different universe.

Was it nerve-wracking putting your faith in an instrument that produced inherently random results?

There’s some really seriously nerve-wracking parts about making art in general, and definitely in writing. For me, I sometimes really have to coax myself into a writing zone. When I’m trying to balance being a person out in the world—socializing and performing—a lot of times my writerly self isn’t comfortable. It just wants to be alone in a really quiet, isolated place. Even when I’m there, it’s a matter of coaxing out this playful spirit.

That’s the bigger practice surrounding my writing. I’m trying to create a comfortable space to be creative. And that’s the nerve-wracking part. Working with that Critter & Guitari instrument, I’d record these free improvisations and then I’d give myself the task of chopping them up into little sequences to find my favorite juicy little part. From there, I’d build my songs. It was a very fun exercise. It was new and successful.

You recorded this album with a live drummer. With the album being so heavily based in electronics, what went into that decision?

I started working with Ryan Power, who co-produced my album with me, in Vermont. I brought in the demos and we did a lot of work together. After that session, I went back to Brooklyn and had my first gig as Kalbells. I decided to do it as a duo with Ian Chang, who’s an amazing drummer who plays with Son Lux and Rubblebucket. The experience of working with Ian live made me instantly realize that we had to capture this for the record. He’s such a special musician. I was very dedicated to keeping it very insular but I couldn’t resist Ian Chang. The charm [laughs].

And what was the nature of your collaboration with Ryan Power? I’ve been a big fan of his solo work for a while, but didn’t know he produced as well.

I’m right there with ya. I’ve been a fan of his work for many, many years. Growing up in Vermont, I’ve been an admirer for a long time. It was incredible working with him. It was totally transformative. It was so fun. I was pretty nervous going into it and didn’t know what to expect; I didn’t realize how playful it would be. It was very ‘yes’ oriented.

Was that what he brought to the table?

We both really met each other there. It was a very positive space that felt malleable and calm. It was funny, we fell into some natural meditations and we were really at ease with each other. It was a pretty magical encounter.

With the album being a reflection of such a personal and painful time in your life, were you skeptical about bringing in an outside collaborator for a story this intimate?

Yeah, I totally was skeptical. It’s funny, the entire project is so personal. Both the subject matter and the craft itself. The demos I made were my favorite demos I had ever done. After all my learning about how to record over the years with Rubblebucket, I felt like I finally had this idea that I could do it myself. I know what to do now. I have a nice mic and some nice converters and I have Logic. I can just make an album on my own. That was my approach to the demo making, like, ‘Let’s get this as good sounding as possible so I can just release it if I want to.’

If it had been anyone aside from Ryan, I wouldn’t have wanted to include an outside collaborator. It just happened to be someone I admired so much and as we were working, it was like, ‘Oh, of course. Let’s have Ryan’s voice on a song.’ It was just so freaking magical to witness that and to be working with a legend—something like that!

Were you two friends before you connected for Ten Flowers?

We had played shows together with our bands. We did a short run together with Rubblebucket, Ryan Power, and Delicate Steve in 2013 or so. We had met on that tour and kept in touch for a little bit.

Where does the ‘bells’ in Kalbells come from?

It started out as a Dropbox folder called Kalbells [laughs]. That was something Alex [Toth, Rubblebucket] and I were working on together. He was like, ‘Kal, if you make any new songs put it in this Dropbox folder.’ He called it ‘Kalbells’ and it kind of stuck. The actual creation story behind the beginning of it was he went away on a meditation retreat, and during those 10 days, I decided to write 10 songs to honor the work he was doing and to do some work myself. He expressed that he just wanted me to write more. He made me a folder and I put the songs in the folder and that became the album.

The album spans a lot of different influences. Who were some musicians you were listening to while writing and recording?

There are so many, it’s hard to think back to the moment. I’ve admired the music NNA has put out for so long. I’ve gone to them time and time again, just to get great sounds to put into my brain. I don’t know all the names of their releases, but I’ve been collecting their cassettes and vinyl for years. Some of them I listen to so many times and don’t even know the name of the artists. One of my favorites is by Matt Carlson. It’s NNA050 and it’s beautiful. It’s a dream world, but for your ears. I’ve been really drawn to that sort of beautiful drone-y, glorious abstract—you know who reminds me a lot of it in the pop world is Animal Collective or Department of Eagles. There was that time—and maybe that’s not over yet—where they had these beautiful, dreamy, lush, harmonic tones coming out and that was really inspiring. And then there’s Björk. She gets me. She gets me real good.

Your album is more pop-oriented than most NNA stuff. Were you worried about fitting in with their more experimental stuff?

I didn’t think about it too much, because the music I originally sent Toby was a lot more sparse, and I was going for something right in the middle. I was still singing on those songs, but they were unfinished lyrically, so there were a lot of sections with empty, beautiful soundscapes. It’s been a collaboration between Toby and me as well. He really saw something more poppy in me and guided me in that direction. It’s been really amazing working with that label. I know a dream of his has been to crossover a bit into more accessible and lyrical terrain. So it’s been really exciting.

With all you’ve been through in the past few years, what are you most proud of about the creation of Ten Flowers?

[Laughs] That’s such a beautiful question. Well, it goes back to something we talked about earlier, in trusting my choices. I think, if I could put it into one idea, that’d be it. Just trusting myself and really giving myself the full attention and love that I deserve. That can be a metaphor for life, too. But in the realm of music, I don’t think I’ve always done that as much. And it’s certainly something I’m seeking out of this experience and really continuing through the rest of my life. It’s so important and it’s a really hard lesson to come by so I feel really proud that I was able to come by it.