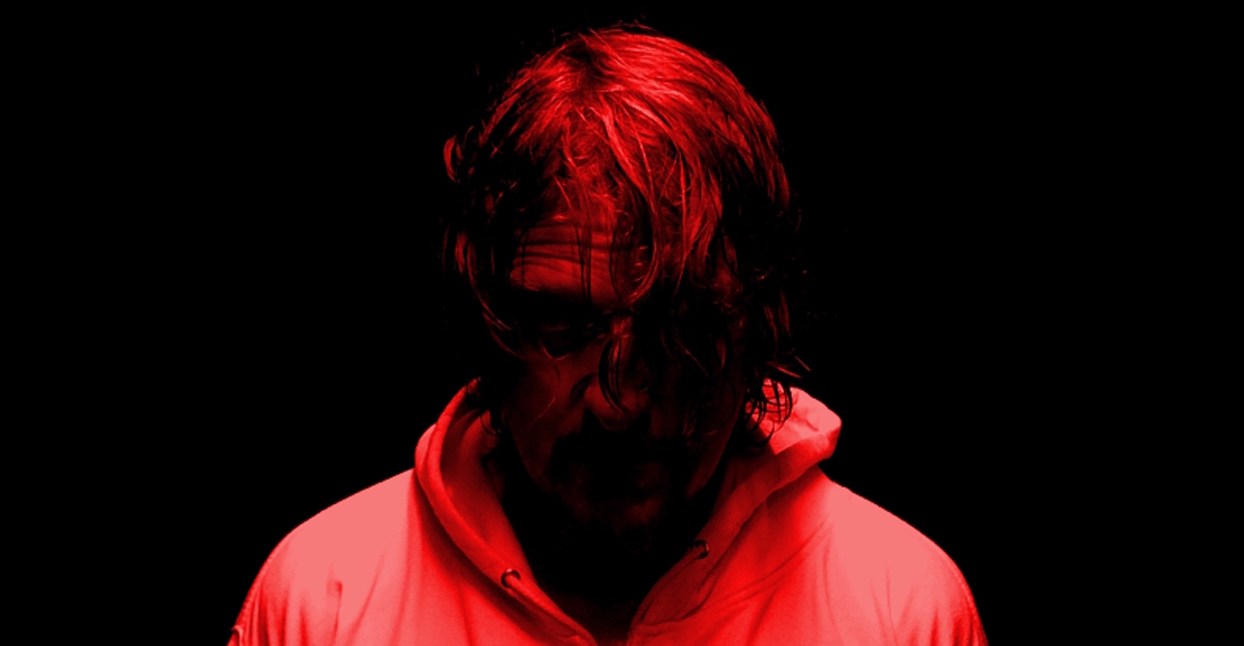 With his pioneering industrial metal band Godflesh, Justin Broadrick writes songs built on concussive beats, apocalyptic riffs, and feral howls. It’s music made for an audience who, during live shows, reward the storm of sound with rapt attention. But when Broadrick performs in techno clubs as JK Flesh, he wears a hoodie that covers most of his face, and escapes into his own world while ravers on the dancefloor gyrate to the beat, paying little mind to the person creating it. And, to hear Broadrick talk, that’s just the way he likes it.

“After spending so many years playing in a band where all the focus is on you, it’s quite liberating to be a booth making a whole crowd dance,” Broadrick says from his home in North Wales, where he’s surrounded by old mixers and keyboards, a row of dusty guitars lined up against a cement wall behind him. “I like the anonymity of it. I like the fact that I’m taking part in this ritual without being the center of it.”

That JK Flesh remains a faceless techno hero isn’t for any lack of history or talent. Over the past six years, Broadrick has dropped three eclectic full-length albums under that moniker (Posthuman, Rise Above, and the brand new New Horizon, as well as five EPs and a split release with Prurient), all of which showcase an adeptness at experimenting with textures both mellifluous and malevolent. For New Horizon, Broadrick wrote and recorded hundreds of snippets over an exhausting week in his home studio in early 2017. Then, he spent a month in his basement editing the passages and mixing the tracks, using a combination of hardware and industrial gear, including tape loops and echo pedals. The result is an immediate, energized dance record that matches the excitement of its creation.

“JK Flesh works in a very singular way,” Broadrick says. “It’s generated from jams, but it’s not some fucking hippy endeavor. It was very hands-on and very concise. I don’t generally spend even an hour on one thing—maybe 10 minutes and I’m like, ‘Right, I’ve said everything I need to say. On to the next one.’”

With dubstep and techno rhythms that average 120 to 135 beats per minute, and a wide variety of unnerving samples and grinding noises, New Horizon is an effective amalgam of Broadrick’s Detroit techno heroes, including Jeff Mills and Robert Hood, crossed with British industrial pioneers such as Throbbing Gristle and Whitehouse. Live, Broadrick runs his compositions through mixers that he can tweak at will and syncs it all to a drum machine, so he can stretch out or chop up the structures of the original recordings.

JK Flesh is hardly Broadrick’s most established project, even amongst his purely electronic compositions, but it actually predates many of his best-known outfits. He cut his teeth in extreme metal bands Napalm Death and Head of David in the ‘80s before forming Godflesh, and also released five full-lengths and a batch of EPs and singles with Kevin Martin (God, The Bug) as the industrial hip-hop group Techno Animal between 1991 and 2001. When the duo parted ways, Broadrick started working as JK Flesh, though he sat on most of those recordings for nearly 20 years while he worked with and released albums by the shoegaze band Jesu, the ambient electronic outfit Pale Sketcher, the post-punk group Graymachine, and the industrial noise project Final.

“I suppose I didn’t have the impetus to do yet another project on my own at the time,” he says. “I didn’t have the confidence, either. To some extent, I still don’t. I’m not some accomplished musician. I’m a pervert. I’m a deviant. I’m just learning as I go along and unfortunately I’m a slow learner.”

As garrulous as he is self-deprecating, Broadrick looks at his career as a series of mistakes and missteps that he’s analyzed and learned from so he can continue fumbling around until his next gaffe. The first JK Flesh album, 2012’s Posthuman, was a bracing showcase of techno, drum & bass, and trap beats combined with abrasive guitar and roaring vocals. It seems like a clever way of introducing fans of experimental metal to his electronic music. Broadrick views it more as a confused and misguided move. “I submitted a lot of post-dubstep, techno, and peripheral sounds to the guy at the label and he was like, ‘God, this shit’s great! But imagine if you put some of your Godflesh guitar and vocals in there,’” Broadrick recalls. “In retrospect, I wish I just left the stuff minimal.”

With the 55-minute long JK Flesh EP, Nothing Is Free, which he released for free in 2015, Broadrick sought to return to his original aesthetic, creating slower, darky psychedelic tracks. The title track, for example, mixed low, resounding beats with what sounds like a distorted ticking clock and hissing static; “Kontorted” is driven by syncopated electronic drums, scraping sounds, and mechanical gurgles. “I love working in that slowish, 80 to 90 BPM, super fucking gray area,” Broadrick says. “A lot of DJs don’t want to play that stuff, but for me, it’s a great zone to experiment.”

Broadrick captures the same unsettling moods on New Horizon, but with faster tempos. Then again, all of Broadrick’s music, from Final to Zonal (his new project with Martin), can make listeners uncomfortable. “My bottom line is often misery of some context,” Broadrick admits. “The new JK Flesh is very much about textures that become very earthy, burly, and somewhat hellish. I think it’s interesting to some people because it comes through the lens of this old guy who’s been making odd, so-called industrial metal for years, but also makes shoegaze, and who grew up as an odd kid on the industrial post-punk of the ‘80s.”

In addition to being the sum of Broadrick’s collective influences, New Horizon’s bleaker, more jittery tracks, such as “Super Human” and “The Next Stage,” are guided by Broadrick’s struggles with depression and anxiety, especially during the darkest months of the year. “I worked on the album just before Christmas, which I often find a really upsetting time,” Broadrick reveals. “It’s full of joy, but it’s often followed by great depression, which I kind of like. When I can get myself motivated at the end of the year, it’s a great time to make music.”

Anxiety has always been a problem for Broadrick; the panic attack he suffered in 2002 effectively caused the initial breakup of Godflesh. These days, the prolific artist treats his depression by self-medicating with weed (he tried booze, but it made him worse). But ultimately, what keeps Broadrick relatively stable is sitting alone in his studio and obsessively working on new music, continually challenging himself with every style in which he dabbles, from weird techno to visceral industrial metal.

“As a 19 or 20-year-old, I used to fantasize that one day I will master this shit,” Broadrick concludes. “Now, I’m completely resigned to the fact that I will never master this. And that’s the beauty of it. It’s not about the fucking ending. I’m terrified of endings. I always cry at endings. I like the journey of discovering all these new avenues—having this infinite experience that feels like it’s never going to end.”