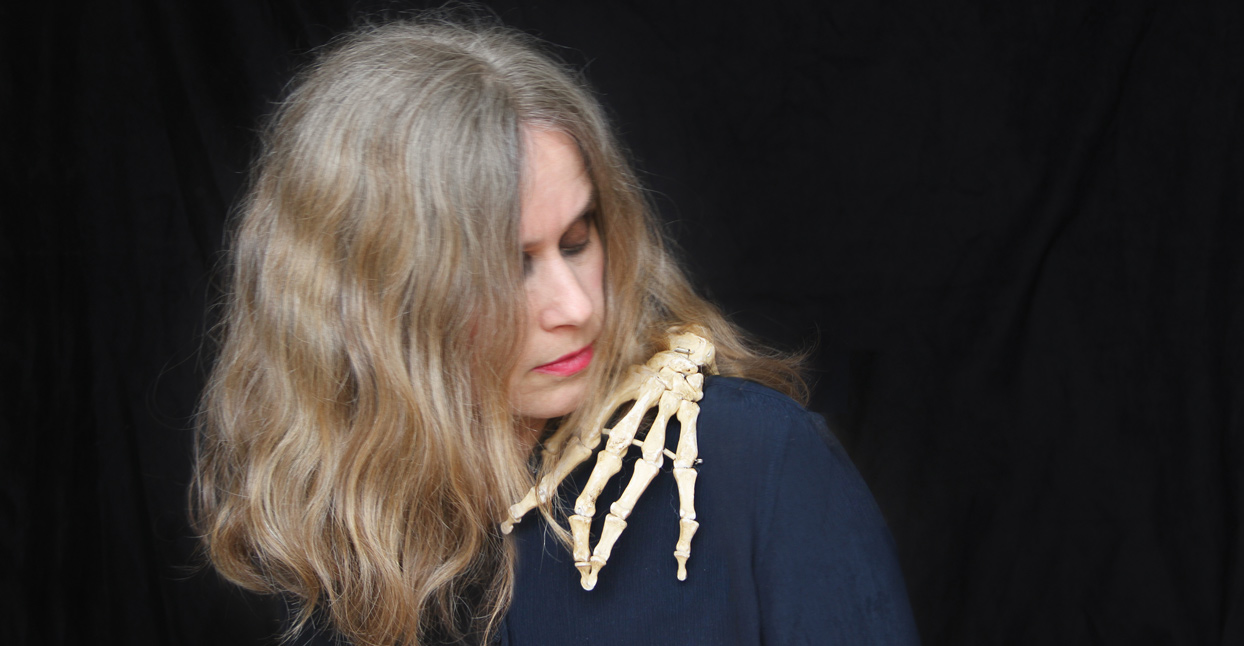 When Juana Molina speaks about her music, she peppers the conversation with rich metaphors, referencing caves and conversations between intimate objects. It’s a linguistic move that parallels the Argentinian singer-songwriter’s homespun, heavily-textured folk. With its gently-sung, Spanish-language lyrics, looped guitars, and unexpected percussive passages, it’s not a stretch to believe that Halo—Molina’s seventh and most recent album—was made with mythical creatures in mind, even if Molina herself doesn’t have any particular spiritual beliefs, other than the power of music.

She was once one of her country’s most popular comedians and working in television afforded her the ability to collaborate with like-minded artists in a public setting. But when it came to music, Molina preferred to create in complete solitude. That is, until Halo, when the musician reluctantly let a producer and a band into the process, only saving the final touches for herself. The result is a dark folk song cycle full of electronic embellishments, understated keys, and often frantic guitar lines—a perfect backdrop for her eerie and elegant soprano. Surprisingly, even with all the contrasting elements, Halo feels organic, almost as if the instruments and not the musician herself, put it together. And as Molina points out, that’s exactly the point.

The art for the last album had you becoming a blue crepe paper monster. The album art for Halo features you as a bone with eyes.

Yes! [Laughs] We worked a lot with Alejandro Ros who has made all the covers for my records. We had been working a lot on a different cover, but I told him that even though I liked it a lot, it was somewhat similar to my previous covers. So he said, ‘Okay, look at me.’ And he took a picture with his phone. The next day, he came back with that bone with my eyes on it. I was in shock. I burst into laughter, but at the same time, I thought it was scary. I didn’t know what it was. It had such an impact on me. I didn’t know if I liked it or not, but I knew it was going to be the next cover. There were few friends that were almost upset with that picture. ‘You can’t do this! This is awful! This is really, really terrible!’ They didn’t find anything funny about this. There were so many different reactions that I thought it was a good sign.

Are visuals and music tied together for you?

I see images that are much more abstract. They just happen while the music is being made or played. What I see while I’m playing is pretty dark. Anything that happens has a dark background. A dark canvas. Then everything that happens is either brighter or less dark. The instruments are in conversation. But all those conversations are little drawings for me. Very simple drawings. Little lines with square shapes or curly shapes. Very geometric.

I think since Segundo, these kinds of things started to happen when I was playing. They haven’t changed. They’re different every time, in every song, and every moment of every song. I think I’m further and further from the possibility of describing what I see, honestly. When I’m trying to describe it, I don’t see anything. Every sound has a different shape. Sometimes it’s very symmetrical. Sometimes, when a vocal comes in with lots of effects, I see light coming in between other things that are already happening. When I think of this, I think it’s pretty obvious, but when I try to explain it, I realize that no one can see it the way I do.

What is the best environment to tap into this mental state?

The most important thing to me is to know that there’s absolutely no one listening. I need total intimacy to get to the core of things. There’s intimacy that the instruments need. If there’s people looking at them, they aren’t able to do that. There’s enough judgement with myself. I have already have 100 censors looking at me saying, ‘What are you doing? Oh, come on, you’re not doing that.’ But there’s a point where I keep going deeper and deeper in that tunnel and [my fears] can’t get in. They’re too big. They are stranded outside. They get lost. Then I disappear as well. I think it’s me who’s stuck outside. I’m not judging anything. It’s just something happening—a communion with my ability to move my hands, obeying what the instruments are telling me to do.

How long does it take you to get to that point where your hands do what the instruments want them to do?

A long time. When I start thinking about a record, it takes me weeks. Maybe I’ll record many ideas that I more or less like—trying to get rid of most of it. Sometimes there’s just an interval after a note that I find is really pretty and I don’t throw it away. It’s there. It’s a little personality telling me, ‘Do something with me!’ Then I keep it, put it in a drawer. Maybe I start adding other things, or inventing a melody or rhythm. Or I discover they should be played in a different way. It can be a mix of the two first things. And then the door opens and the studio starts disappearing. I don’t see the instruments or the computers or anything. Everything, including me, disappears. I get into a very real thing with the music only. It’s pure music. Whatever it is, even if it’s something simple, it’s only that. Then, that’s when all the shapes start to come from the music. I start to get all these soundscapes that actually give me directions to go somewhere. Without those images, I won’t get anywhere ever.

When do you know it’s time to bring someone else in?

I’ve been working on my own for the past six records. This time I worked Odin [Schwartz] who has lots of technical knowledge. He’s young and discovers things faster than I do. He’s always willing to help get things done with a very nice spirit and way of being. He kept insisting, ‘Let’s go to the studio.’ I explained to him that all those moments that I needed in order to really get to something worth it was just not going to be there because there were going to be technicians and other people and the engineer and him.

At the beginning, over the course of the first three days, I felt like I shouldn’t have come. It wasn’t going to work. The guy who mixed the record with me, he started to give me instruments. They said, ‘Try this, try this, try that.’ It was a special studio. It had thousands of instruments, just sitting there and waiting for you to play. There were hundreds of keyboards and many guitars. I didn’t care as much about guitars because I’m fine with mine. But bass and keyboard, that interested me the most. I started to play around with those keyboards and realized I wouldn’t have come to this record, what it is now, if I hadn’t come to this studio. It’s because of these new friends that offered me their timbers and sounds and ideas. You hear a sound that you’ve never heard before, and you combine some notes, and it’s already happening! That’s something that wouldn’t have happened if you didn’t have that sound telling you, ‘Look, here I am!’ Of course, different musicians would have done different things. But I think every musician has their own relationship with the instruments. I really think you can play almost anything—not properly—but good enough to make music. I really owe this to Odin. He’s the one who insisted and pushed me to record something. Both of them were really helpful for this to happen.

Does the word “halo” have a special meaning for you?

I let things happen. In the end, when everything is done, that is where I find meaning. It’s like you’ve been unconsciously gathering things and going somewhere without noticing you were there. For instance, the bone [for the album cover]. It was difficult for the designer to think about the cover without the title. But he came up with the bone anyway. I really didn’t have a title—not even a provisional one. So I started to read the lyrics to see if I found at least one word representing the album, or a word that was able to become a title. Then I found that word: halo. It was the only possible word throughout the whole lyrics.

When I told Alejandro that I had named the record, he reminded me the story about the evil light. It’s a flourescent light floating above the ground when there’s been an animal that has been there for a long time. Sometimes the combination of flesh, bones, and weather makes this thing evaporate from the rotting bones. It’s a very florescent light floating a few centimeters from the ground. It became a scary myth in the countryside. All this superstition. But it’s great because suddenly everything was making sense.

Do you have any superstitions?

Not anymore. I used to be very superstitious. I used to think that if I didn’t walk ten steps to the right and then jump two little hops forward then I was not going to pass an exam or something like that.