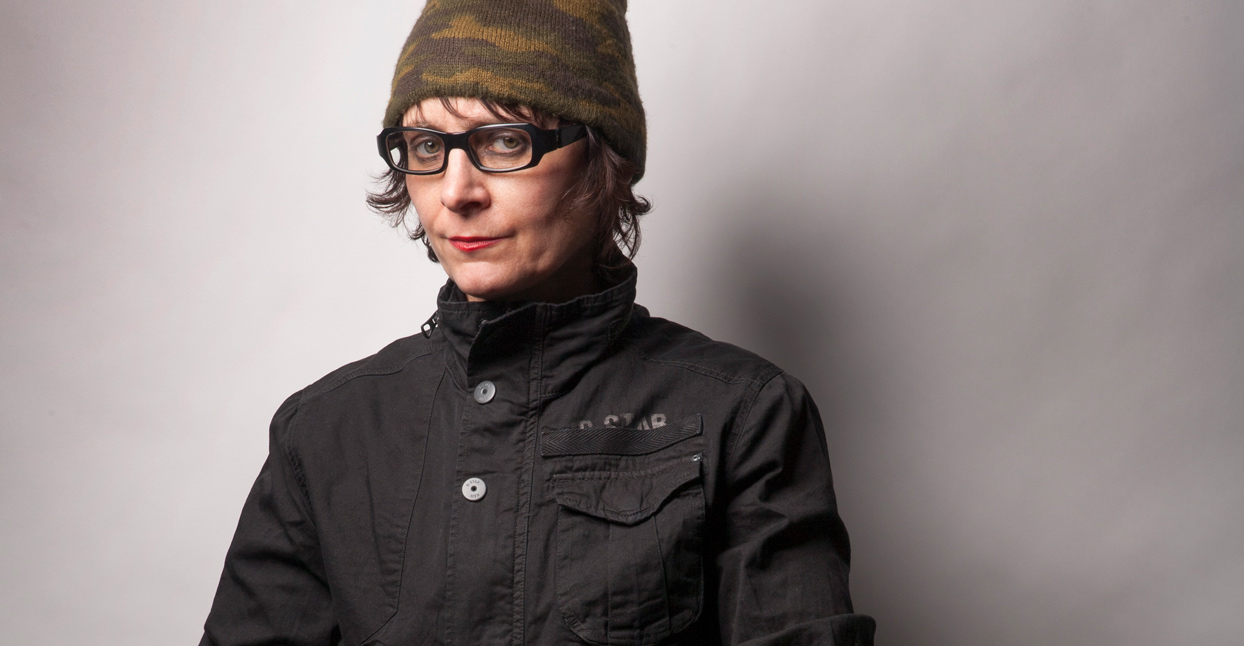 “It was really hard going,” laughs Josephine Wiggs. She’s speaking about the emotional shifts she needed to make while working on her meditative, mostly instrumental solo album We Fall during downtime on The Breeders’ 2018 tour. “It was very difficult to switch gear from doing this moody, ambient stuff and then going and playing a rock show.”

Wiggs had already been working on the tracks—in one form or another—for years by that time. But when she got word that fledgling label The Sound of Sinners wanted the project to be its first release, she kicked her work into high gear. “I started working on it with a view to it becoming an album,” she recalls. “And I was trying to mix it while we were touring last year. I had my little mobile studio that I took around with me. We’d arrive at the venue at 10 in the morning and I’d set up my work space and spend two or three hours mixing before soundcheck.”

Despite risking sonic whiplash from the drastic shifts between The Breeders’ visceral alt-rock and the contemplative, piano-based instrumentals of We Fall, Wiggs ultimately embraced the juxtaposition. “I think the contrast of switching from one to the other helps you appreciate the elements of both of them,” she says.

While Wiggs earned her rock-star stripes as bassist for The Breeders in the ’90s, and has been back with the band since 2012, she’s always had more strings to her bow, literally—she started out as a cellist. “I started at age six and I took lessons for 10 years,” she says. But rock ‘n’ roll lured her away from the instrument her in her early teens, and she began playing bass in a band with her sister’s boyfriend. “I was never really into punk,” she recalls, “but I kind of got into post-punk, stuff like the Gang of Four and The Cure and Siouxsie and the Banshees.”

Wiggs’s early bands Attack of the Puppet People and The Avocados didn’t exactly set the British indie scene ablaze, but she joined up with The Perfect Disaster just ahead of their 1988 album Asylum Road, which put her a step closer to destiny. “Perfect Disaster supported the Pixies when they were doing shows in London,” she remembers. “Kim [Deal] saw me play with them, and then when she and Tanya [Donelly] were getting together the songs that became [Breeders debut LP] Pod, she asked someone at 4AD to track me down and find out if I would play bass.”

Though Pod didn’t make much commercial headway, 1993’s Last Splash arrived just in time to help light the fuse for the era’s alt-rock explosion. “I think there was a big element of right time/right place,” Wiggs ventures. “The record had a certain pop element to it but there was also a kind of grungy, indie element as well. We definitely reaped the benefit of the explosion of MTV, we were right in the crest of that wave in terms of the ‘Cannonball’ video… and the fact that we toured with Nirvana—there was a whole confluence of events that led to the record getting to the position that it did.”

The quirky bassline that kicks off “Cannonball,” the band’s biggest hit and one of the era’s most iconic cuts, cemented Wiggs’s status in alt-rock history. “People often talk about that bass lick,” she admits, “and I often think to myself the only reason that it has the effect that it has is because you hear it on its own at the beginning of the record. Because it’s in the intro, it kind of became the hook. The reason why it had that key change in there was that we had got together to rehearse and we played it for a while and I played the wrong note… it was only when the guitars came in that I realized, and I quickly adjusted. It was an accident.”

By ’95 The Breeders were no more, and Wiggs went on to a multitude of projects, including The Josephine Wiggs Experience and Luscious Jackson spinoff Kostars, but it was an endeavor with Luscious Jackson’s Vivian Trimble that set the stage for Wiggs’s recent instrumental work. “Vivian and I started working together doing Dusty Trails,” she recounts. “Both of us still wanted to be doing music, but if we could break into film music it would be a way of doing it that didn’t involve being on tour… We decided to make an album as a sort of trailer, if you will, a kind of a demo of filmic, cinematic pieces.”

The duo’s efforts did lead to some soundtrack work, which Wiggs later continued to pursue on her own. But by 2012, rock ‘n’ roll had reclaimed her, and she rejoined the rest of The Breeders’ Last Splash lineup in time for a tour commemorating the influential album’s 20th anniversary. Around the same time, the seeds of what would become We Fall were planted, with Wiggs’s music for the documentary Built on Narrow Land.

“The earliest recordings were done for the documentary,” she says. “But then when I finished with that I kept working on the pieces, making them longer and changing the arrangements to create, instead of a 30- or 40-second piece, a four-minute piece. I’ve been working on it on and off for quite a number of years.”

From the subtly ominous opening track “37 Words” to the delicate impressionism of closing cut “Afterwards,” Wiggs employs piano, cello, Mellotron, bass, and the occasional guitar to set the scene, with longtime cohort Jon Mattock of Spiritualized adding percussion and electronics. While the results could be dubbed ambient, there are other influences at work as well.

“I’ve always been aware of Eno’s stuff,” says Wiggs, “his ambient series, Music for Airports and that kind of thing, and was an admirer of that genre of music. It was something different than creating a catchy tune that’s just verse/chorus/verse/chorus; I’ve always been interested in something other than doing that. And also classical music, I’ve always been aware of that part of my life and my upbringing. That was in my blood. Another big influence was the whole series of albums that Ryuichi Sakamoto did with [German electronic musician] Alva Noto, where it’s piano mixed with electronic components. I loved those albums.”

There’s an abiding melancholy about the tracks that Wiggs attributes to its soundtrack beginnings. “This documentary,” she explains, “was about houses that were falling into decay in Wellfleet on Cape Cod. There was something kind of nostalgic and melancholy about it that set the mood for the pieces of music I started to write.”

But a more personal aspect informed the album’s emotional tone too. “I recorded in England on the piano that my father had bought for himself in the late ’90s,” she explains. “He was a very talented amateur musician, that’s probably why I became a musician. Then unfortunately he died rather young in 2001, so he only had the piano for a couple of years. And so that also was in my mind.”

We Fall flows with an organic grace that belies its long, laborious road to completion. For all the work Wiggs put in, the seams are undetectable. “People are like, ‘Why do you always have to make everything so complicated?'” she says. “‘Why does it take so long?’ Because I can’t do it any other way. It’s interesting to realize I can’t do anything that’s just quick and easy.”