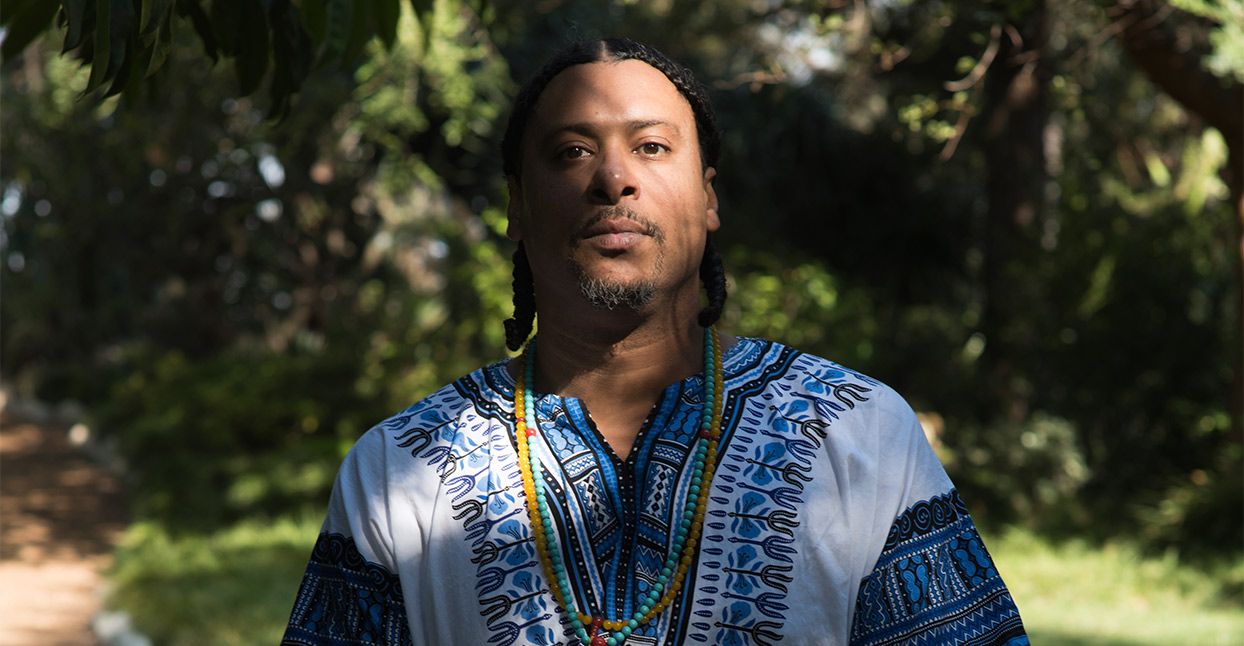 Over the past 20 years, trumpeter Josef Leimberg has carved out a nice career playing in the background on some of our most widely celebrated albums: Erykah Badu’s New Amerykah Part One (4th World War) and Kendrick Lamar’s To Pimp A Butterfly, among many others. In a way, Leimberg has established the perfect niche for himself: He’s been able to rub elbows with music’s elite, while maintaining a relatively low-key day-to-day existence. On Astral Progressions, Leimberg’s long-awaited debut album, the composer steps to the forefront with a spiritual jazz release, featuring a who’s who of hip-hop and soul. Among other features, saxophonist Kamasi Washington appears on “Interstellar Universe,” and soul singer Bilal offers a standout performance on “Between Us 2.”

Though Astral Progressions is out this Friday, we’re premiering it here now. We spoke with Leimberg about the record, his mother’s creative influence, and why even though Progressions took a few years to finish, it’s arriving right on time.

Your name has been in a ton of liner notes. How have you been able to work with all those artists?

It’s through mutual producers, collaborators and friends. It really just depends on the situation; it could be a rehearsal, a jam session, a recording session here and there, bringing some beats to the table wherever it may be, or playing a little horn when possible. We all have mutual friends out here in L.A.

At what point did you decide you wanted to make your own album?

I think I seriously started working on it like around 2011. I had a lot of friends who were very supportive of what I was doing, but always encouraged me to put my own project together. My mother was definitely somebody who wanted me to do a blues album. When she said a blues record, I know what she meant: “Do your thing.” She knew I loved all kinds of music. She passed in 2012, but she knew I loved everything in between—from jazz, to hip-hop, to progressive rock, to classical and traditional, indigenous music from different lands. That’s all I took it as, “Just do your thing and mix it up.” That was one of the main things that struck me. When your mama tell you to do something, you take it very seriously. Also, dudes like Shafiq Husayn, Battlecat and Taz Arnold, these were people who always encouraged me to do my own project. Of course I always wanted to do it myself, but it’s always encouraging to have loved ones inspire you to do your own project.

Do you believe you fulfilled your mother’s promise with this album?

Ya know, I tried to be as true and as honest as I could with the music. I put a lot of years and love and time into it, so I would say I pulled off what she requested. You always feel like you coulda went deeper, or you coulda played more notes or had more features. Maybe the drums coulda hit a little harder, but after a long process, you start to discover what works naturally and what hasn’t. The album came together very organically, and I feel good about it.

Listening to Astral Progressions, it has a deeply spiritual vibe to it. The album feels otherworldly in a sense. Is that what you were going for?

That’s exactly what I was going for. I wanted to keep the spiritual elements in there, because I feel music is very spiritual, so I wanted to take you on a journey, man. I want you to lose yourself within the music. That’s why I added so many layers, textures and instrumentation, just trying to give it that dimension, where you can get lost in it.

Once you knew what vision you wanted for this album, did it take a while to pull together?

It did! A friend of mine posted something that said “Josef Leimberg [is] working on his new project.” That was 2011. When I saw the post, I was like, “It’s officially documented.” [laughs] Then I realized I just finished it this year, so it’s been a solid five years. The album took on a whole new dimension with these strings, and that’s what really opened me up to even more textures. I’d put flutes on everything if I could. I’d put strings on everything if I could. It was definitely a process. I ended up calling a lot of people back like, “You sounded so good on this, can I get you back for this, this and this?” A lot of people were receptive to what I was doing, and didn’t hesitate to participate. I got this one brother doing a lot of tunes, just doing a lot of ‘oohs’ and ‘aahs.’ And Jimetta Rose, ya know, I’d give her a ring and she’d say, “What you need, some ‘oohs’ and ‘aahs,’ baby, I’m there.” Everybody was just totally cool. That was just a blessing, to have people receptive to what I was doing, and get in there with me. It felt really special.

That probably came from those relationships you built over the years. The fact that you just call these people and they come in.

Ah man, it was beautiful. To have Kamasi Washington come in and lace me with such a beautiful solo? Oh my God, I was ecstatic. Like wow.

How did your work as a session musician help you discover your own creative voice for your album?

When Georgia [Anne Muldrow] jumped on the album, that was one of the first songs that spawned the focus of it. Once I had Georgia on there, I felt the sky was the limit. Because she’s one of my all-time favorites, so when she came into town, I was lucky to have her come by the studio before she went back to Vegas. She was like, “Do you mind if I take a Nina Simone approach?” and I was like, “Go for it. Please do.” I started that particular song with just the beat and the trumpet, but when she jumped on it, that’s what set it off. If you have one song with all these textures and elements, then all of ‘em gotta have it! [laughs] I tried to make sure all the songs had the same amount of love, so they were cohesive, and some types of bells and whistles in them.

Whether it’s your record, or Kamasi’s, Jimetta’s or MNDSGN’s, there’s something magical happening in L.A.

I’ll tell you like this, man: I’m truly in awe being born and raised out here. I’m inspired by Thundercat, Kamasi, Terrace Martin, Jimetta Rose and Shafiq Husayn. You got Taz Arnold and the Freestyle Fellowship. All that stuff, man. That inspires me to do what I do, whether I’m just playing the horn, or programming beats, or helping somebody with a project, or adding some textures here and there. I’m not only a fan of it, I just feel blessed to be a part of it. The way Terrace brought me into the Kendrick project; he didn’t have to do that, but we’ve been playing together in bands with Snoop. He’s pulled me into sessions with various people, and gigs with Faith Evans. It’s just beautiful to see everyone sharing their talents with each other to help the movement grow. So I just feel honored that I’m able to share some music in this renaissance.