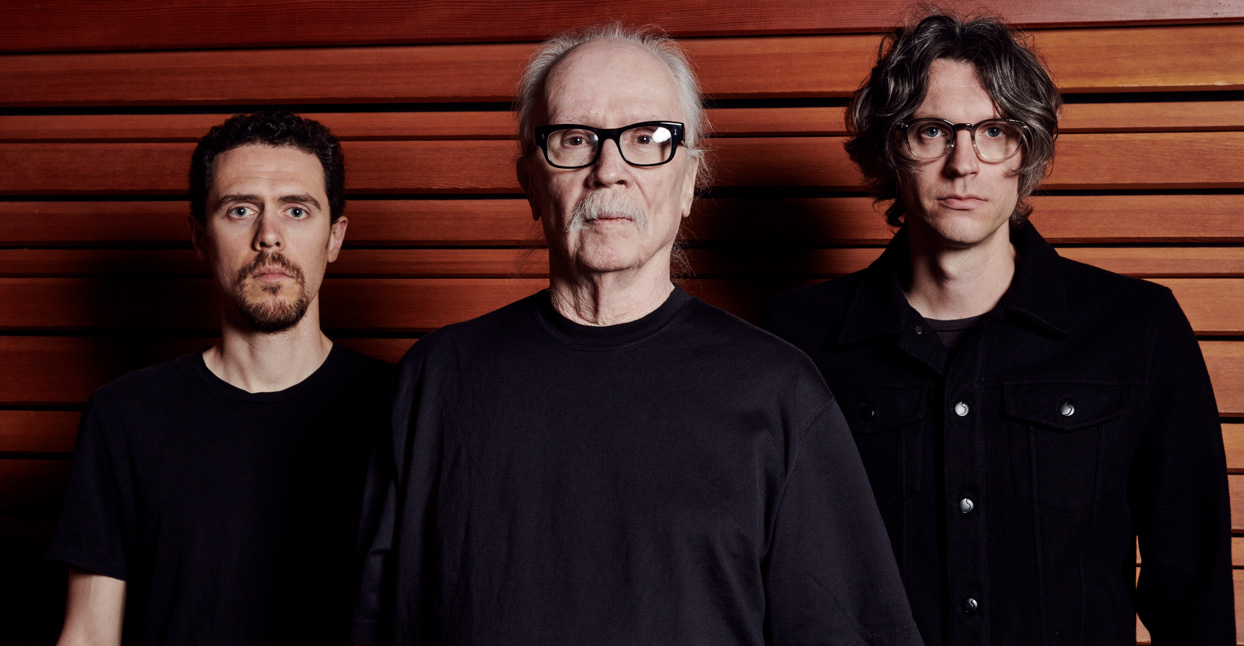 “It’s not precious, none of this is. I just want to enjoy myself,” John Carpenter says. He’s reflecting on the music he wrote for his pioneering films, which have been recently anthologized in a new collection, Anthology: Movie Themes 1974-1998. These days, Carpenter is well-known as the director of cult (and occasionally commercially successful) films such as Assault on Precinct 13, They Live, Halloween, The Fog, Big Trouble in Little China, and Escape From New York. But when he was a young, broke, and ambitious filmmaker in the ’70s, necessity often required him to take on other roles: writer, editor, producer, and composer. The music he wrote for his movies is the perfect complement to his visual aesthetic: Moody drones and ominous, throbbing slabs of synthesizer (an instrument of which Carpenter was an early adopter) mark the scores to many of his films, while the chilling piano stabs that comprise the classic theme from Halloween are still able to provoke an automatic feeling of dread—especially in people who saw the film when they were perhaps too young. One of those people is Trent Reznor who, along with Atticus Ross, remixed the track with Carpenter’s blessing. “We left the theater forever changed. We were damaged and scarred, with the shit genuinely scared out of us and that theme stuck firmly in our heads,” Reznor says.

Carpenter is both thrilled and a little surprised that the music from his films continues to unsettle and inspire. “I mean, can you imagine? It’s unbelievable. At my age? It’s just great,” the 69-year-old says. “I don’t take it all for granted; it’s kind of mystifying…why now? I’m not going to guess or worry about it, I’m just going to enjoy it.” The renewed interest in Carpenter’s work by a younger generation—perhaps coupled with the ongoing wave of ’80s nostalgia—has spurred Carpenter to make music that’s not intended to accompany his movies. A few years back, he decided to write, release, and tour new music under his own name. The result was a pair of albums, Lost Themes and Lost Themes II, collaborative projects with his son, Cody, and his godson, Daniel Davies (son of the Kinks’ Dave Davies).

The pair also assisted Carpenter when it came time to revisit his older material for Anthology. All of the tracks have been re-recorded and freshened up; “In The Mouth of Madness,” which was inspired by Metallica, now features Daniel Davies on guitar, where his dad once played the original’s monster riff. It’s been revealing for Carpenter to return to the music after many years. “It’s sometimes surprising, revisiting old music; I’m not sure if it’s good-surprising or bad-surprising, but it’s surprising. In some instances, I could see the young, unsophisticated guy in there who is trying to make a movie score.”

This urge to return to the past is particularly unusual, given Carpenter’s famous ambivalence toward rewatching his old films; for Carpenter, the music helps create a prettier memory. “If I don’t watch the films then, in my mind, they are better than they really are,” he says. “Which is the way I want them to be. I want them to be better than they are. Music has always helped that. Because I say, ‘Boy, that sounds pretty good. Maybe the film is good, too?’” The tracks collected on Anthology have, over the years, become an essential part of his DNA: “These are the themes that make up my life,” he says, “for better or worse.”

Carpenter’s approach to making music has always been rooted in an autonomous, almost DIY, approach—which is antithetical to the way most films are scored. “The composer’s job is to almost have a separate vision for the movie,” he says. “It’s supporting the scenes in every way possible— emotionally or thematically, being a part of telling the story, or simply just sitting in the background and providing some emotional support for the audience as they watch a scene. It’s not to tell them what’s going on, or to tell them the mood—that’s not the way you score. It’s a complex thing that’s hard to put into words. It’s much more emotional and intuitive, and that has always been the fun of doing music for movies—that it’s intuitive.” Carpenter has a straightforward rule for knowing when his work as a composer has been successful. “My criteria for doing a good job is if it makes the scene better than it was when it was silent. If I can do that, then I’m happy, I don’t care how I get there, that’s all I want to do.”

Where many artists aim for perfection in their work, Carpenter has deliberately embraced the rough-edged. Given his background as a low-budget independent filmmaker, the idea of imperfection is something that’s a core part of his aesthetic—which doesn’t exactly silence the critic in him. “I’m convinced that nothing I’ve done works, and that’s why I don’t watch my own films,” he explains. “If I watched my own movies, I’d be sitting here saying, ‘Why did I do that?’ That’s a stupid thing to do. There’s no such thing as perfection, human beings are incapable of it. We’re just sitting here passing time and having a good time as the world comes apart.”

Though Carpenter’s name has been associated with music as long as it has with film, in recent years he’s been spending far more time on the former (the last film he directed was 2010’s The Ward). But it’s not a case of one interest supplanting the other. “They are different mediums, it’s a different art form—cinema will always be my first love,” he says. “What I hate about it is the industry, and the pressure and the stress that goes along with it. Cinema itself is triumphant to me. Music is a different art form, so I approach it in a different way. It’s non-verbal, you don’t have to convince an actor to do something in music. It’s more of a direct connection to the inside of a person.”

This connection to music, and Carpenter’s ability to express it, has rejuvenated him; he sounds buoyant when he talks about it. “All this is a joy for me, it’s great fun,” he says. And as for the future? “I would like to still be here, existing on the earth, that would be a really good thing,” he says. “I had a real, real serious health issue a couple of years ago, and that just gave me a new outlook on life. So what you’re hearing now is a survivor at nearly 70 years old, and I’m happy to be here. I hope I can last a while longer.”