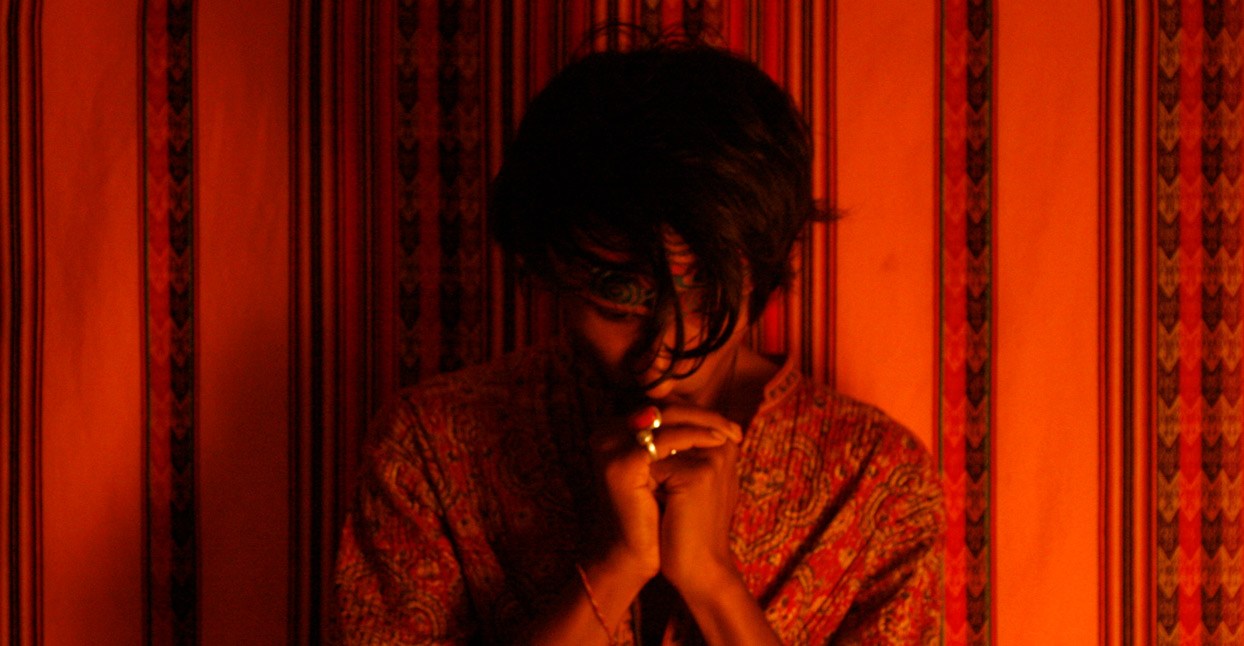 Jitwam doesn’t stay in one musical place for too long. On his albums, he mixes soulful deep house and dusty folk into a fluid whole, while his voice—a free-flowing instrument that follows whatever sound he’s tinkering with—gives the music a feeling of looseness and impulsiveness. On his latest album, ज़ितम सिहँ, he ricochets between the drowsy, psychedelic R&B of “thelove,” the humid funk of “i ain’t scared of no devil,” and the bleary jazz of “d00000000000000000000” with grace and ease, all of them held together by a kind of gauzy, overcast production sheen. In a way, his music almost feels like an old cassette found in someone’s basement. It’s never cheap or hollow, it’s just a little grimy and completely organic.

We spoke with Jitwam on the phone from his Brooklyn apartment, where he discussed how he captures his particular sound, how moving and his spirituality impact his music, and what it all means for his recently released self-titled debut album.

Has moving around (from India to Australia to London to New York) influenced the way you approach music?

Definitely. Maybe not so much musically, but more as in a state of mind. I went traveling for like four years, wandering around like a gypsy. You see so many people and have relationships you think are so important, then the very next day they’re out of your life, so you get into a very transient state of being.

For me, when I look back at my music, I see a lot of transience in it. Not exclusively in the messaging or lyrics, but just in the tone of the sound. There’s a word for it: hypnogogic, it’s a state between dreaming and being awake. You know when you wake up in the morning, it takes you like 20 minutes to actually clock into the real world? It’s that in-between state. I find my best music to be in that, and it’s similar to a traveling state of mind. You’re not really here or there, but in the ether.

You can hear it in the textures and layers you put together.

Actually, I read a review of my first EP, and the whole review was about that word, ‘hypnogogic.’ And when I read that I was like, ‘Oh yeahhh, that actually makes mad sense.’ It’s funny, sometimes you read shit about yourself, and then it actually clicks for you. You do all this stuff unconsciously.

I feel like the new album reminds me of what you did on your previous EPs, but pulls them together into a unified sound. Is that what you were going for?

The album was actually recorded when I was in London and before the latest EP I released, and it was written after a dear friend of ours had passed away. I was on the move, and when I listen back to it, it’s a realization that this thing is not really here forever. The album ends with ‘youkilledmyson,’ and the first song [‘thelove’] is like entering the world. ‘In the sky of your mind / Is the sun, don’t be blind / To the love.’ I really tried to capture the full circle of what happens in between life and death.

Did you approach the album differently than your EPs?

I don’t write anything down, it’s all pure subconscious—pretty much improvisation to oblivion. For the album, I paid attention to the transitions between songs. Even if there is none, just the silence. But with the EPs, I smacked together a bunch of songs. Here, though, I spent just as long figuring out which tracks are going to glide in and out of each other. That was the most challenging and different aspect of doing an album, as opposed to an EP.

Did you do that purposely from the start, or did it come together during the creative process?

I think it’s the same for a lot of musicians these days: You make loads of tracks, then you come back and listen, and the meaning starts to present itself. That’s what I found. I don’t try to impose too much meaning on to anything, and I feel that way about all the albums I love personally. The meaning presents itself after you’ve listened to it three or four times, then you get whatever it is you get out of it.

Even though you have your own concept of how you view the album, do you prefer the listeners to create that for themselves?

I suppose so. I’m not really too intent on the listener deriving any meaning. A lot of the songs, when I listen back to them, they’re very personal letters to friends or odes to life or to the journey we’re all on. The track ‘later…’ is a letter to a friend. Many of my songs tend to be letters I’m writing to people in a very spiritual sense.

How much does spirituality impact the music you create?

I’m Indian by birth, so you know, it’s in our DNA. As a young person, you’re always rebellious against what your mom and dad are trying to instill in you, but then as you grow up, you start to become a little more appreciative of what your folks were getting at. It’s the same with my spirituality. It’s become more present as I get older. I’ve spent a lot of time in monasteries and went to silent meditation retreats, and went three months without speaking. I’ve always been very spiritually inclined, not in the sense of prescribing to a particular religion but more so prescribing to good thought.

It’s funny you say that, because I’d describe your music as raw or organic or straight from the source. It doesn’t sound processed.

I’ve been told my songs sound like sketches. And a lot of the time when I play my tunes next to others people’s, mine are really empty sounding. Like on that ‘i ain’t scared of no devil’ tune, there’s literally three instruments and a voice, for better or worse.

I think it’s for better because it sounds more unique. It’s not contrived or forced.

And to be fair, a lot of the artists I love to listen to the most, oftentimes their music is record so differently, like a lot of Jay Electronica tunes, for instance. I don’t know what he does with his tunes or vocals, but you play that next to a new Kendrick Lamar track, and the Jay Electronica track doesn’t hit you in the same way. It’s a little bit softer. That’s why Jay Electronica is such a singular artist compared to a lot of other rappers out there. Talking about this now and as I progress and get better with what I’m doing, I would like to think of myself as a singular artist as opposed to trying to fulfill all the criteria of a produced record.