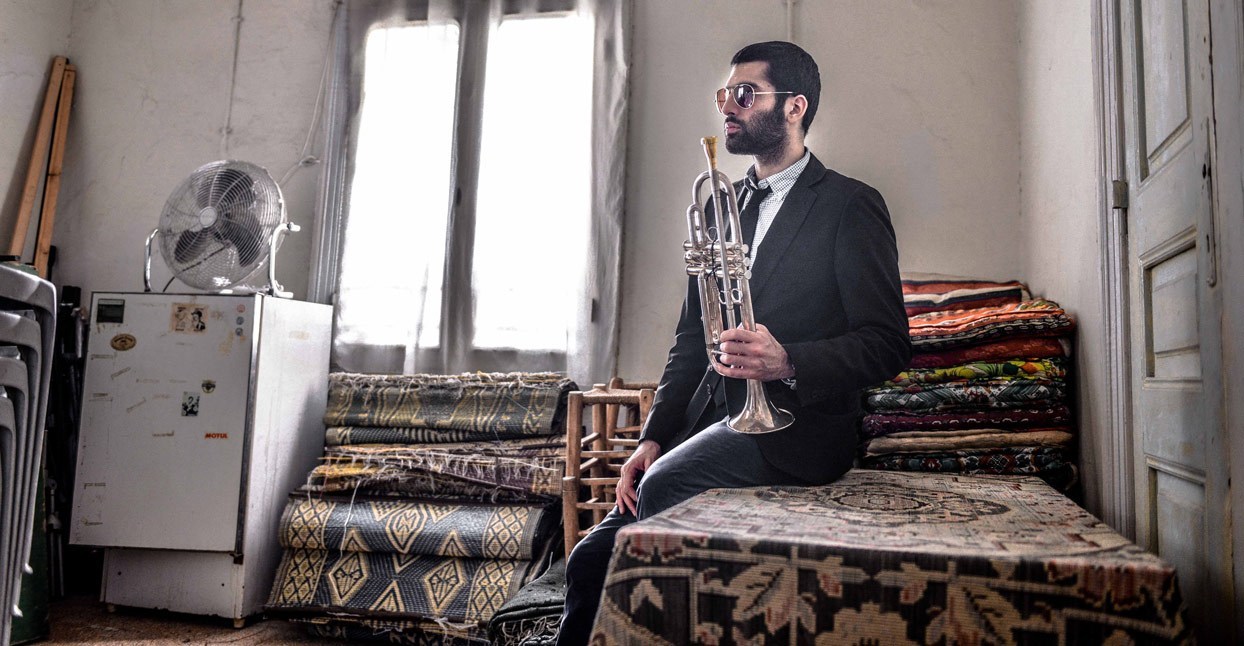 Though he warrants being billed as a leading light in contemporary jazz for his infusion of traditional styles with Middle Eastern and North African influences, trumpet player Itamar Borochov’s recent work is a study in discretion. On Blue Nights, Borochov’s third album as a bandleader, a full eight minutes in the jazz-ballad style go by before any sounds emerge that would be unfamiliar to jazz-fluent listeners. Borochov and his band—his brother Avri Borochov on double bass and oud, Rob Clearfield on piano, and Jay Sawyer on drums—then deftly slip into a cadence and harmonic scale that bring to mind the solemn majesty of the desert (a setting that inspires great awe in Borochov).

It’s not at all surprising that Blue Nights draws from an array of elements including bebop, rock, pop, Arabic maquam scales, the Gnawa patterns of North Africa’s Hausa people, and sounds that Borochov encountered in a local Yemenite-Jewish synagogue in his native Jaffa, Israel. What is surprising is the way the band manages to introduce changes without disturbing the silken flow of the music.

“I never set out to be the guy that mixes this and that,” Borochov offers. “The only thing that I did was I allowed my genuine influences to come forward in the music. I stopped holding it back.”

As a youngster growing up in Jaffa, Borochov was heavily steeped in American jazz tradition. The first time he heard Sketches of Spain, Miles Davis and Gil Evans’ landmark fusion of jazz and orchestral music with Spanish folk, Borochov had a sensation of being touched by the divine in a way that circumvented his musical intellect. Before that, when he first started playing in his early teens, Borochov fell into an abiding fascination with bebop that continues to this day: in the liner notes for his 2016 sophomore effort Boomerang, Borochov refers to bebop as “the highest of musical art forms” and, crucially, “the first ‘world music.’”

Listening to Outset, Borochov’s searing-hot 2014 debut as a bandleader, his adherence to the canonical bebop vocabulary at that stage of his development is quite apparent. Although Borochov’s playing on that album revitalizes the form with a phrasing that’s assertive, fluid and lyrical in equal measure, one can detect virtually no evidence of his own personal background. It wasn’t until Borochov came to New York to participate in Betty Carter’s Jazz Ahead program in 2008 that he would reach a critical turning point when elder saxophonist Nathan Davis told him, simply, “We want you to be you.”

For Borochov, everything snapped into place at that moment, and he felt free license to pursue the trail of any music that spoke to him. Borochov’s parents, for example, were fans of pop music, so the sounds of Prince and Fleetwood Mac also filled the Borochov family home. Rock fans will likely strain to hear traces of those influences on Blue Nights, but they’re there, perhaps as tiny beads on the threads of each band member’s intertwining parts. And, though North African styles like Gnawa and Chaabi are more apparent on Blue Nights, Borochov is also drawn to musical influences from countries farther south—Mali, Benin, and Gabon—with each new motif blending seamlessly into the whole.

“If you’re grounded enough,” Borochov offers, “if you reach down to the roots and to the eternal principles of any music, that allows you to soar. If the tree has roots that are deep enough, it can grow high. But if you just try to go up high, you have nothing to hold you up. I’m very much into finding those principles that are eternal. For me to feel like I can afford to incorporate those quote-unquote ‘foreign’ elements into my music, I could only do it after I first delved into the music first as it is, having been listening, studying, and playing jazz since my early teens. All I ever wanted to do at that time was play bebop. But I’m into the period before bebop as well—New Orleans, Louis Armstrong, the swing era. I moved to New York to be a part of that [lineage]. I don’t think I would have been able to afford to [stretch out] if I hadn’t had that respect and paid those dues to jazz first.”