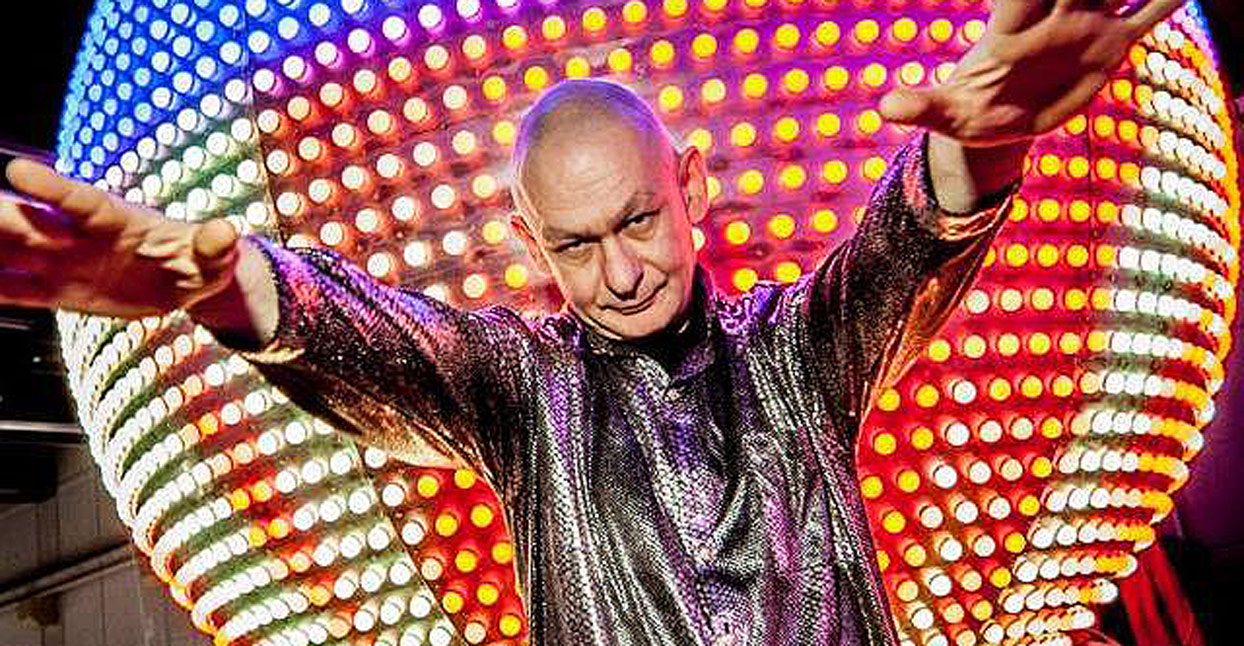 Morris Gould has been DJing for 36 years, and has been making electronic music for longer still. His profile was at its highest through the 1990s, when—always clad in silver or holographic outfits—he made three albums as The Irresistible Force for keystone labels Rising High and Ninja Tune, was a tastemaker columnist for the NME, and toured worldwide with the likes of Aphex Twin, The Orb, and Spiritualized. His name became synonymous with the rave chillout room. But it becomes abundantly clear on speaking to him at his South London home that he is as busy as he’s ever been.

Most notably, has he made Kira Kira, the first Irresistible Force album in almost 20 years, and a notable musical step forward. This one is full of live instruments, lush arrangements, and detailed song structures that evoke the cosmic soul of 1970s bands like Rotary Connection, as well as ‘90s space cadet backrooms. But even before that, ever the one-man industry, he’s been getting his digital hustle on; he recorded and uploaded practically every DJ set he played, and promoted them across social media.

This strategy resulted in more diverse gigs. “I’m very lucky I can do different types of gigs every week, so I don’t get bored,” he says. “This weekend, I was booked for a reggae festival. Next week, I’ll be at Bestival playing to young ravers. I can do jazz festivals, I did a Christian festival a couple of years ago. I just did a healing festival in Germany full of old hippies, so I decided as it was the 50th anniversary of Pink Floyd’s first album, I’d play only music you might’ve heard at the UFO club in London in 1967. I like to keep busy!”

Gould bought his first synthesizer as a teenager in 1980, having already released an EP with his punk band The Ripchords the year before. By 1981, he was in London promoting band shows at university and seeing himself as a figurative “child of John Peel.” Gould decided to DJ between acts, playing the more experimental and club-oriented fringe tracks of post-punk. “It’d be things like Shriekback, Public Image Ltd, and Material,” he says. “If I’d played ‘Boogie Oogie Oogie,’ the audience at an Orange Juice gig wouldn’t have appreciated it that much, but if it was something they’d heard on John Peel, they’d lap it up. Not that many people danced at gigs in the early ’80s, they just stood around drinking lager and blackcurrant. But it started me buying 12-inch singles, and generally beginning to think of myself as a DJ.”

He was a regular at London gay scene mecca Heaven, where he’d see the late Colin Faver mixing new wave, industrial, and emerging U.S. dance forms. Gould played his own sets at private parties: “In particular, there were a couple of gay guys who had an amazing house in Notting Hill and had parties in the garden. I’d play off cassette, because American imports were so hard to get and I’d have a huge pile of tapes, each one carefully wound to the exact cue point I wanted to start the track so I could mix it in. It was fairly labor-intensive.” The name Mixmaster Morris emerged around the time he got a show on London pirate station Network 21 in 1985. He kept his day job, in the computer industry, teaching himself music software on the side, and was also playing live synth-and-drum shows as The Rhythm Method. “We recorded a ton of electronic stuff around then,” he says, “which will probably see the light of day at some point—I’m not so sure the hip-hop I made inspired by the Beastie Boys ever will, though!”

He’d been an early adapter of house music, and when acid house mania truly hit London in 1988, he ran one of the first club nights, The Madhouse. But it was in 1989 that he really found his calling. That’s when he saw Alex Paterson and Jimmy Cauty playing in their spaced-out sets in the legendary back room of Paul Oakenfold’s Land Of Oz club night in Heaven. These ambient sets of familiar and abstract sounds blurred together with effects and layering, which spawned The Orb and The KLF’s Chill Out album, chimed with him instantly. “I asked if I could play and they said no,” laughs Gould, “so I just got another night at Heaven and that was that. Actually, it was better because their room was only for VIPs, for the elite, but I’d been reading about Prometheus, and I wanted to bring fire to the people!”

He never looked back. “It was a really exciting time,” he says, “and through DJ sets and through writing in the NME, I was able to push some really strange, advanced music. You could have acts like Future Sound Of London or The Black Dog having U.K. Top 10 albums, and I think we were all very proud that we were able to get such radical music heard.” He was recording music alone and with luminaries like Frankfurt’s Pete Namlook and San Francisco’s Jonah Sharp (aka Spacetime Continuum), but at the same time, he was continuing to broaden his own palette. “I started playing on [London’s] KISS FM,” he says, “which exposed me to R-Solution—Dego, Kirk DeGiorgio, and Phil Asher’s show—that opened up the whole soul-jazz world to me and I started buying those records. I didn’t play them much as a DJ, but then I started going to Japan more and found people really responded to those tracks, so I started to play more and buy more and it snowballed.”

That Japanese connection would be key to Gould as time went on. He first played there in 1993, and says with a smile, “Chillout places really took off straight after that. I’m not saying it was cause and effect, just that I did it first and it happened straight afterwards!” To casual observers elsewhere, his profile dipped after the turn of the millennium, but he always played to big crowds in Japan, and continued to release occasional Japan-only records through the 2000s. He continues to average a month of every year playing there, and has a strong affinity for Japanese food, language, and culture, which he says suits chillout music as “a respect for craft and patience.”

Kira Kira came about “purely because someone asked me.” His old friend Matt Black of Coldcut gave super-producer, Killing Joke bassist Youth and early member of The Orb a nudge, and Youth invited Gould to spend a few days at his studio on a Spanish mountain. “There weren’t many electronic instruments there,” says Gould, “which is why it ended up sounding like it does. I played guitars, keyboard, and bass on it, Youth and Jah Wobble added basslines on a couple of tracks, and I got some sax from Nik Turner [ex of Hawkwind] because he’d been staying at Youth’s just before that. It all came quite easily really!”

Although he is a sometimes prickly character, who has no time for mainstream music industry shenanigans or the narcissism of the modern EDM industry, Gould seems very content with his lot. He loves the endless bounty of being a record collector: “I think the 1970s, and especially the soul-jazz of the time, is where I have the most interest, and there’s still so much stuff I’ve never heard before.” But at the same time he remains as interested in new developments as before, technological and musical. “I’m so glad that we have USB sticks and Mixcloud now,” he says. “My life would be a whole lot more tiring without them.”

He continues to be enthused by new music, too. His latest discovery is harebrained Italian sample-mangler Økapi, and his big current obsession is the Brainfeeder axis and particularly Thundercat. “He’s not just the best bass player, but the most amazing writer, performer, stage presence, producer, and it all sounds new and very psychedelic,” he says. “Having him and Flying Lotus do sellout shows and chart albums show that the weird stuff can still get out there to people. I think L.A. is the best place in the world for music now, and in fact, I’m overdue a trip there. Though thinking about it, it does seem to be on fire at the moment. Hmm, perhaps I’ll wait ’til the fire’s out…and there’s a new president…”