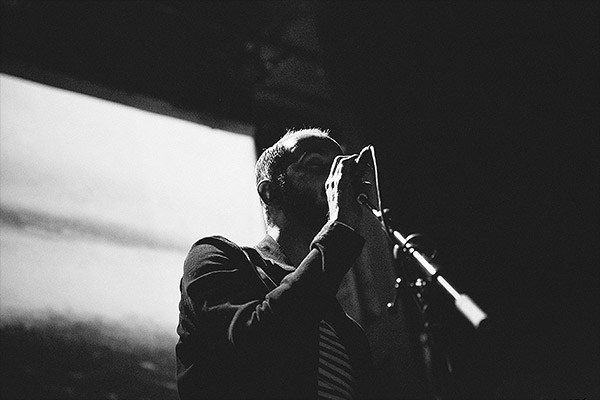 “One line in a song can be the end of the world. You just hook into it and it says what you couldn’t say at the time.”—Greg Gonzalez

It’s the stuff of indie rock fairy tales: Last October, a sudden, unexplainable spike in YouTube views led to a flurry of fandom for Greg Gonzalez’s latest project, Cigarettes After Sex. Almost overnight, viewers from all over the world fell in love with the handful of songs the group had released, all of them driven by Gonzalez’s delicate croon.

There are only two Cigarettes After Sex releases to date. Gonzalez refers to them as records, but the first, I., released in 2012, contains four songs, and the second, Affection, from October 2015, has just two. The mood is consistent throughout: “Affection” is half bittersweet apology, half long-distance relationship ballad. The pace is so slow you almost want Gonzalez to hurry up and sing, but a crisp drum beat and a floating guitar line beautifully distract from his dawdling. Even more impressive: Gonzales takes the REO Speedwagon lite-FM classic, “Keep On Loving You,” and slows it to a crawl, drawing out the mournfulness at its core.

On a break between European tours, we caught up with Gonzalez to talk about his highly-anticipated LP.

You’re heading into the studio this week. Is this to record the full-length?

Yeah, we’ve done a few sessions for it. It isn’t quite where I want it yet. Tomorrow we’re going to record in a movie theater on the Upper East Side, which seems like a good location. We’re trying to get it out as soon as possible.

So, this record will be longer than the last two?

Yes. It’s funny, people are often like, ‘Are you guys gonna put out some more stuff or what?’ Less is more. It’s hard when we play shows, because it’s almost always half new stuff. The fans have to be up for hearing that, which is a mixed blessing. Two of our songs are covers, so at least there’s that.

What made you want to cover “Keep On Loving You”?

I’d grown up with it, pretty much. I don’t know if you ever feel this way, but there were so many songs present in my childhood that were just kinda floating in the air. You know them, but you feel indifferent to them. Then, years later, I went back to it, and all of a sudden something jumped out, and I fell in love with the song. There’s probably some nostalgia involved there. And maybe it’s that, after a little time, you can finally see the song for what it is, and any negative connotations disappear. Once I moved to New York, I kind of got back into it. And then I just started playing it really slowly, because I thought it was a really sad song. Playing it that slowly brought out how brutal a song it is. The main character is just stuck—it’s a really tearful exchange. It’s like, ‘I don’t want to sleep, I just want to keep this going, and I’m so heartbroken.’ I thought, ‘Maybe we’ll cover it someday.’ And then two years later, we did a take, and that’s the take that’s on the record. It was one take, and it was the first time we had ever played it.

Fans on Bandcamp have described your music as ‘bittersweet sadness,’ ‘achingly good dream pop,’ and have said it ‘reminds [them] of heavy fog mid-morning.’ How would you describe it?

Wow, that’s awesome. I think I saw that. That’s amazing to get compared to a landscape. That’s exactly what I want to do: make music that is elemental, where it feels like it’s taking you someplace. Like Aphex Twin’s Selected Ambient Works II—it feels like you’re in these landscapes when you put it on. That was a big influence. Even Brian Eno’s Music for Airports—all this ambient music that makes you feel like you’re in some strange place. That’s amazing—that’s a really high compliment, to be compared to a landscape.

I’m sure people throw comparisons at you all the time, and I’m sorry for that, but here’s mine: I think you sound like Galaxie 500.

Oh, really? That’s cool. That was a big influence for me, and I actually don’t really hear that comment from many people. I was a huge fan of On Fire. I love them. I used to always wait for the winter to put them on. I don’t know if you felt that way, too. You have “Snowstorm,” or “Flowers,” which are both so wintery. Usually we get compared to Slowdive or Beach House.

To me, it feels like your sound pre-dates those comparisons. Your music feels older.

It’s coming from stuff before that, for sure. It’s funny, I’ve never been a Slowdive fan. I like them, sure, but I don’t have an extensive knowledge of their records. “Allison” is a great song though.

Your music is very romantic, but it has an edge to it. Your song “Affection,” what’s that about?

That’s based on a true story, which a lot of the songs are. I can be kind of a mean drunk to my friends. It’s all verbal. I don’t know why, but I always say things that are a little too sharp, and I get in trouble for it. I always end up apologizing for being critical. But it’s coming out of love, from a genuine place. That song is me apologizing to my friends, to say, ‘Sorry that I say mean things.’ Because, in the end, I love them. The second half of the song is about this girl that I was seeing at the time. It was a long-distance thing, and we would always talk about her coming to visit New York. So there’s two stories in that song. I love that—taking really specific memories and just being matter-of-fact about them in my lyrics. I don’t feel like I see that too often in writing. Even bands that I love, like Galaxie 500, the words conjure more of a feeling, rather than a straight-ahead narrative. I like a storytelling narrative, like Leonard Cohen on “Chelsea Hotel” or “Famous Blue Raincoat.” I kind of think of my songs as letters to somebody. It’s sweeter when the lyrics are to somebody significant. It makes me feel good when I play the songs, so I can go back to that memory.

That certainly comes across. You share real experiences and your fans find themselves in the lyrics.

One line in a song can just be the end of the world. You just hook into it, and it says what you couldn’t really say at the time.