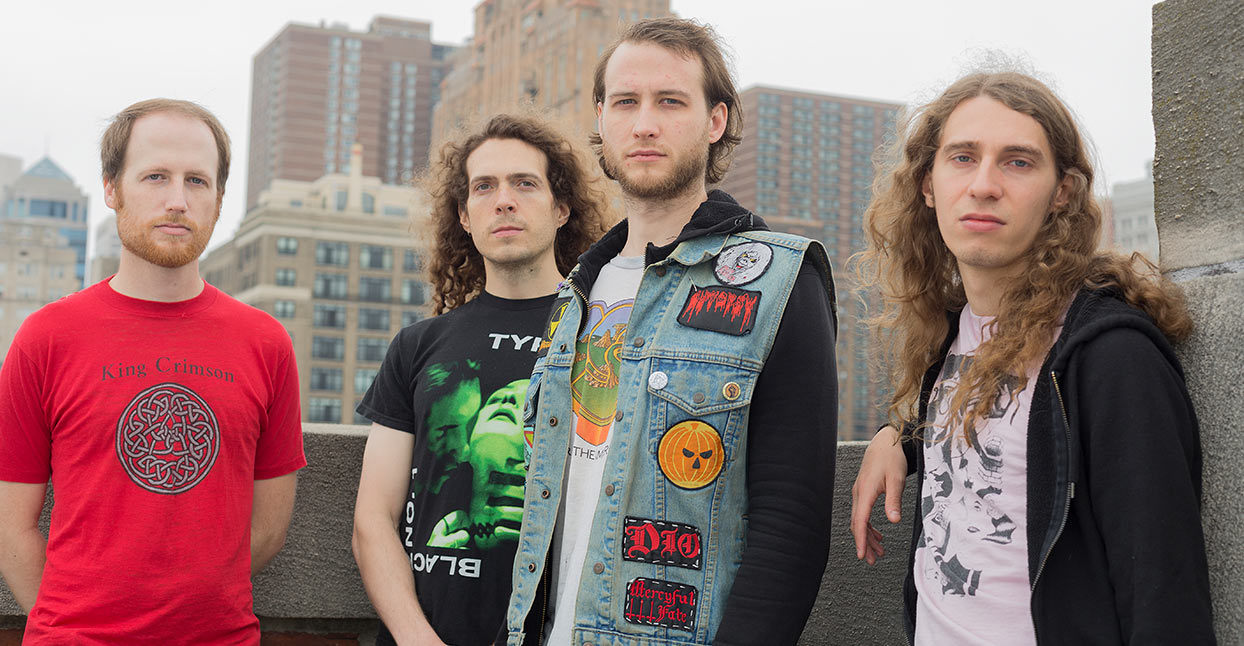 When the members of Horrendous first saw this piece by visual artist Brian Smith, who’d provided the art for their past two albums, they weren’t 100% sure that they wanted to use it for their album. But after writing more of the music and lyrics, they not only decided that the piece had to be the cover, but that its original title had to be the album’s name. And so Idol—a similarly unnerving, creative slab of progressive death metal—was born.

“It’s a very paranoid, claustrophobic album,” says guitarist/vocalist Matt Knox. “While recording, I was in a very stressful and dark time in my life, and that was compounded by the presidential election. All of this blended into a crazy witches’ brew of malevolence.”

Horrendous have been grappling with both introspective and big-picture issues since at least 2014’s Ecdysis. In Knox’s case, he says songwriting is “a means of overcoming [his] own perceived shortcomings or insecurities,” and as for his brother Jamie (the band’s drummer), it’s been important that the band “write songs that actually mean something,” rather than succumb to fantastical metal tropes like zombie apocalypses. But even compared to their last album, 2015’s institution-renouncing Anareta, Horrendous found themselves writing about a very specific type of ailment on Idol.

“At its heart,” says Matt Knox, “the album is about feeling powerless.” This includes the existential anxiety currently afflicting an entire generation due to factors both external and internal, as well as the obsessions and imbalances that occur—or, as he puts it, “whenever you’re giving power away to something else, or letting some thing consume your life.”

These sorts of idols are not only tyrannical rulers and ideologies, but also personal passions, such as making music. One song in particular, “Devotion (Blood For Ink),” confronts the band’s own struggles while recording the album.

“‘Devotion’ is a meta analysis of the whole process of making the record,” says guitarist/vocalist Damian Herring, who has also recorded, mixed, and mastered every Horrendous album. “This record in particular was the most difficult for us, in terms of everything—writing-wise, getting it recorded—it was a totally different process that put a lot of stress on everybody individually. [Making music] itself can become very consuming and lead down a dark path.”

When you factor in the boundary-pushing composition that went into the adventurously progressive Idol, Herring’s point makes perfect sense. With each new album, Horrendous have focused on not retreading ground they’ve already covered. But Idol is the furthest they’ve ever gotten from the “old-school death metal” genre tag. The addition of Alex Kulick, a full-time bassist with a background in free jazz, allows the band to play around with more abstract chords and tones, even giving some passages a Jaco Pastorius-like vibe, as is the case in the intro to “The Idolator.” Additionally, both Knox brothers say they were listening to a ton of classic prog and fusion to get inspired for Idol, and it shows in the final product.

“I had a big focus on rhythms and counter-rhythms and the idea of a recurring theme that appears in the beginning of a song, and then again in a bunch of different forms,” says Matt Knox. “That more grandiose scope of prog is what influenced me, rather than any specific record or sound.”

In the same way that Idol’s song structures are meandering and cyclical, with melodies that often refuse to resolve in standard fashion, so, too, does its theme lack a cut-and-dry moral. As Matt Knox explains it: “I don’t know if the album does provide an answer, which is new for me. The way I typically write, there’s usually an answer at the end. That’s what makes Idol more hostile than our last album. The record is an expression of exacerbation and the malaise of dealing with all of this shit, or a protest against what’s happening, as opposed to an answer. It’s an acknowledgement rather than an escape route. There’s an uncertainty to the whole thing that doesn’t wrap up.”