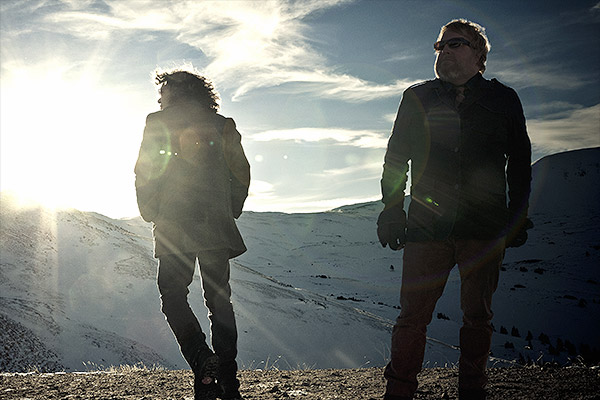 “It’s like someone on a battlefield walking over all of the dead people going, ‘I can’t believe I made it through this.’”—Marc Byrd

Since their inception 11 years ago, one of the most remarkable things about the Nashville duo Hammock has been their ability to almost uncannily translate the pulse and fiber of human emotion into actual chords and melodies. Case in point: “Wasted We Stared at the Ceiling,” from their new record Everything and Nothing. It starts quietly: there’s a ripple of electric guitars, the strings waltz in woozily and the vocals—distant, drowned in echo—glide gently by, repeating the title over. All of the component pieces move in slow motion, weaving and swaying. It feels, in short, a lot like being drunk—not edgy, sloppy, aggressive drunk, but the kind of blissed-out, anything-is-possible lightheadedness that sets in after one too many in a room full of friends and loud music. The whole song is both perfectly out of focus and deeply serene.

“The title of that song came from when I was younger,” explains Marc Byrd, who shares instrumental and vocal duties in Hammock with Andrew Thompson, “I was literally wasted, staring at the ceiling, watching the fan go around. It’s that feeling when you wake up after a party, and people are passed out on the floor, and you’re hearing the birds chirp. For a while there, it can be exhilarating.” But while “Wasted,” on its surface, is almost hymnlike in its tranquility, Byrd is clear-eyed about the experiences that inspired it. “If you keep living that way, those birds chirping start sounding like fingernails on the chalkboard. I feel like that song captures the feeling of, ‘I cant do this anymore.’ It’s like someone on a battlefield walking over all of the dead people going, ‘I can’t believe I made it through this.’”

If there is an entry point to the album, “Wasted” is it, a quiet reflection on the euphoria of a particular way of life, coupled with a realization that it’s time to move on. As the album goes on, the songs take on a sense of determination: in “Burning Down the Fascination,” guitars claw against the borders of the song, as if trying to force their way through the other side. The sense of motion and drive is almost physical. “The title of the record isn’t some nihilistic thing,” Byrd says, “Like, ‘Oh, we have everything, but it’s really nothing, man.’ It’s more about when you’re whittled down and emptied out—and maybe it’s your own doing, or maybe it’s because stuff is going wrong in your life that’s out of your control—and you find a sense of luminous space within that emptiness, so that there’s room to be filled with everything. That was one of the things I kept expressing to Andrew. ‘Where’s the break? Where’s the moment when you look up and are able to actually be in light, and to experience light?’ It’s not just about waiting for the end, it’s about being in life.”

And while plenty of artists pull from reality to inspire their music, what makes Everything so jarring is the way Hammock—with big, ringing guitars and a small handful of mantra-like vocals—are able to capture the sense of both anxiety and relief that accompany real-life revelations. This is at least in part because the album is closely tied to their own practices of mindfulness. Byrd takes an annual trip to Big Sur for a “silent retreat,” where he is able to quiet what he calls the “circus show” inside his head and focus on being in the moment. Thompson is a runner, who uses daily exercise as a way to quietly recalibrate. “If we’re working on a song, when I run, I won’t even have headphones on,” says Thompson. “I’ll just have the piece running in my head. By the end of the run, I’ll end up with a string arrangement or a horn arrangement or an idea for an entire song. It allows your headspace to clear, and you can focus on what’s going on around you. So much gets done in my head that, by the time I get back to the car, I know exactly what to do. It’s all been quietly worked out for an hour.”

“Reality gave us this gift of our breath,” Byrd adds. “And reality gave us stillness. It’s an omnipresent gift that we have. And when we return to that, there’s always a way to come back to the present. For me, there has been a realization that I carry within me everything I need to bring myself back to the moment. It’s always there. We were born with it.”

And while this kind of Zen philosophizing might sound precious coming from other artists, it resonates when Byrd and Thompson talk about it, because you can hear the end result in the music. “Reverence” laps quietly, like waves on the beach; “Unspoken,” which quietly exhorts, “Take time/ let go slowly,” drifts down gentle as a feather and “Marathon Boy,” with its aching piano figure and slow-sighing organ, envelops slowly and warmly. With each song, Everything tugs at something deeper, and provides the soundtrack to help uncover it. “This record was hard for me,” Byrd admits. “There’s a lot of personal stuff that went on in my life, a lot of changes. But you get out the machete and you going through the brush, trying to find your way. And sooner or later, you reach the clearing.”