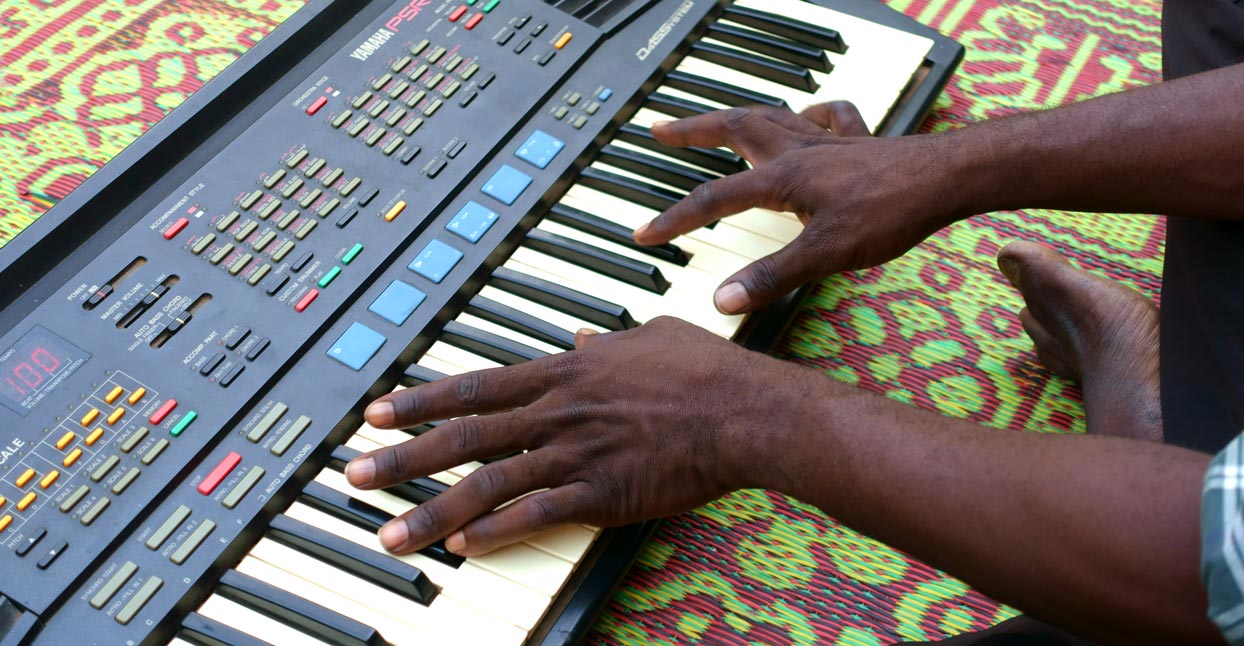 Compared to the superconnected, breakneck internet and file sharing technology of the western world, Niger remains a predominantly mobile-first nation. With a vast majority of its citizens living without electricity, scarcity of infrastructure has made access to mobile phones far easier than personal computers with high-speed internet. Used to support the farming, medicine, and news industries, the all-purpose media devices have also led to a specialized form of music discovery.

Similar to external hard drives, music consumers rely on the sale and trade of sim cards and Bluetooth to swap sounds being made across the entire region. These trades are the quickest and sometimes the only way for an artist to disseminate their work. During research trips to the Sahara throughout the early aughts, Portland, Oregon-based ethnomusicologist Christopher Kirkley likened the sim card exchange to the radio of West Africa. It served as his gateway to both the Tuareg people, a large Berber ethnic confederation, as well as Tuareg music, hypnotic, guitar-driven and rebellious desert blues that resonated deeply with his roots in American blues and folk. Born in the city of Agadez in central Niger, Tuareg music evolved to serve as a voice of a nomadic people, significant portions of its output stemming from a place of political resistance.

In 2010, Kirkley released Music from Saharan Cellphones via his blog-cum-record label Sahel Sounds. The LP collected selections of widely-shared tracks he uncovered on the unofficial MP3 network that now engrossed him. Without proper labels, the origins of these recordings were often anonymous. In the 2016 documentary A Story of Sahel Sounds, a film crew follows Kirkley as he works tirelessly to put a name to groundbreaking tracks from artists including Anmataff and boundary-pushing, highly celebrated guitarist Mdou Moctar.

Noted for his use of synthesizers, Auto-Tune, and drum machines, Mdou’s 2008 EP Anar marked a critical moment for Tuareg music—a break in tradition while concurrently playing homage to its forebears. One of the first electronic reworkings of Tuareg guitar, it helped carry the genre into the 21st century and gave rise to a notable interest in this music in other parts of the world.

Another forward-thinking and like-minded artist was not as easily found. In a quiet neighborhood of Niamey, approximately 600 miles southwest of Agadez, electronic composer and keyboardist Mouhamadou Moussa (Hama) was rising to underground acclaim albeit without name recognition. In 2009, Hama recorded a number of instrumental tracks for local radio. Unbeknownst to him, the recordings labeled by the studio’s audio engineers were simply marked “Nouveau Instrui,” his moniker being left off of the ID tag. Without a link back to him, these electronic desert folk songs became something of a legend in Niger. Who was responsible for these futuristic Saharan sounds? Naturally, Kirkley was determined to deflate the mystery.

The moment in the documentary where the two connect in person for the first time on the terrace of Hama’s family home is a pure exchange of gratitude. Kirkley overjoyed to hear a live performance of the lo-fi compositions he had sought after and listened to countless times, Hama pleasantly surprised the lengths Kirkley had gone to find him. In the most intimate of settings following his day’s work as a private driver, Hama’s open-air, pitch black performance on his trusted Yamaha PSR-64 is unforgettable. “Why are people attracted to my music? I don’t know, but they really are! It’s a music which is a bit surprising,” Hama tells us over the phone from Niger.

One of a select few electronic musicians in Niger, Hama’s 2015 debut LP Torodi provided listeners a glimpse into his love for incorporating ‘90s Nigerien hip-hop, instrumental synth, and Detroit techno into minimalist, digital folk using polyrhythms, pentatonic melodies, and time signatures found in traditional Tuareg. “I was listening to electronic music when I first started composing. I’ve been into traditional music more recently. These kinds of music attracted me to the music until I bought my first keyboard,” he explains. In the Sahel, instrumental, electronic music can mostly be found as backing tracks for hip-hop artists or base layers for remixes—Hama’s music is not meant for a supporting role. “I’d like to collaborate with other musicians, but when when I’m alone I can be really focused on my compositions,” he noted.

If Mdou’s music helped carry Tuareg into the 21st century, Hama’s sophomore effort Houmeissa sends it into the very distant future. Recorded through a painstaking drag-and-drop process on a hacked copy of FruityLoops with intermittent internet access, Hama’s writing system is similar to that of a mechanical engineer—deconstructing rhythms, textures, and melodies then piecing them back together creating something more beautiful than what existed to start. “About the creation, I don’t write songs. It’s something which is in my head. In reality, I’ve never been to school, so it’s a gift from God. Why do I say this? Because someone who plays music, who composes without any lessons, without learning from anyone, it’s a gift from God,” Hama clarifies. Reworking material that bears the weight of history is not a frivolous task, yet on songs like “Terroir,” Hama manages to evoke the same trance-inducing, blissed-out Tuareg feel sans vocals. While lyrics and voice are often a focal point of desert blues, the instrumentals lose nothing in the way of mood or emotion.

You’ll hear the influence of experimental electronic innovators Mamman Sani Abdoulaye and Francis Bebey, yet on Houmeissa you sense this music comes from somewhere only Hama can access. Perhaps it’s his deep knowledge and connection to the landscape in which he traverses every day or his clear affection for his instrument, his first synthesizer gifted to him by a neighbor. Hama is superior at doing a lot with a little. His synths mimic the electric guitar while sweeping pads and drum machines carry the listener across desert landscapes at a measured pace. Ushering in a new era of Saharan avant-garde and electronica, Hama will bring his future-folk across the E.U. for the first time this April with hopes to come to the U.S. in the not so distant future.