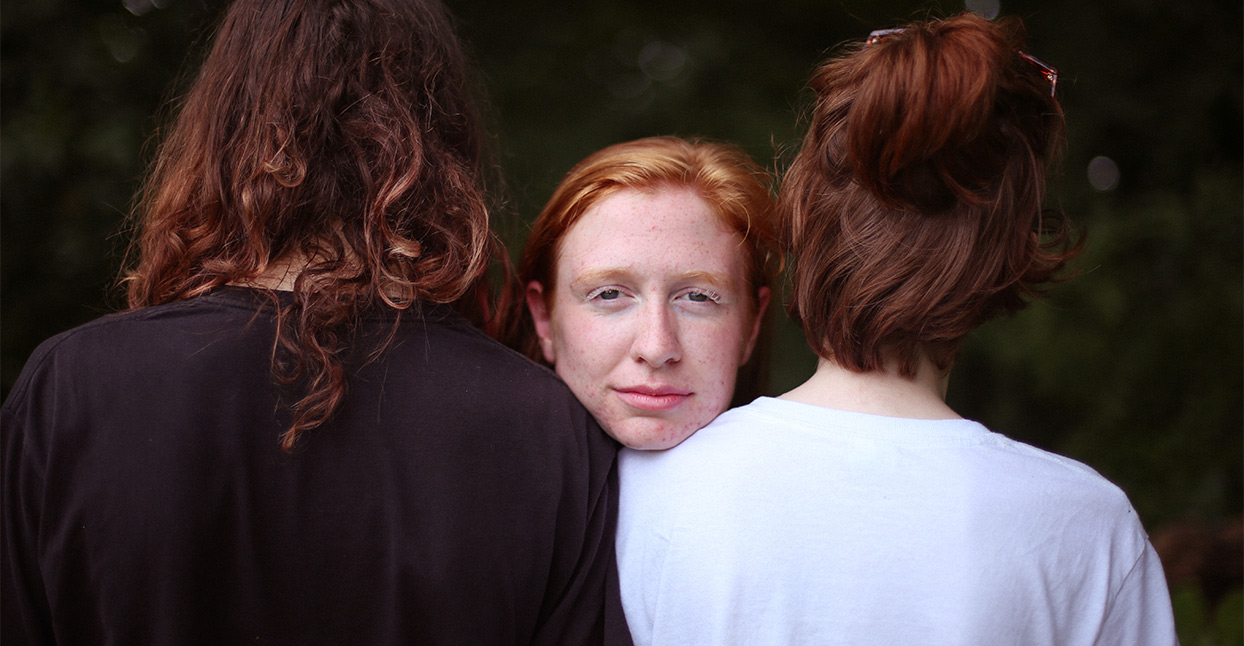 There’s nothing cool about loneliness, Emma Witmer, the early 20-something behind Brooklyn bedroom pop project gobbinjr, insists. She knows that of which she speaks. After moving to New York from Wisconsin to attend NYU’s Clive Davis Institute of Recorded music, Witmer dropped out of school to write and record by herself. Feeling a sense of “imperial aloneness” as a young person in New York is a rite of passage for anyone who moves to the city, and yet these painful moments only seem cool—if they ever do—in hindsight. Witmer’s work as gobbinjr occupies a space somewhere between Mates of State and the bespoke pop of Frankie Cosmos, Eskimeaux, and other contemporaries, and while loneliness shouldn’t be confused with aesthetic posture, gobbinjr’s brand of sad-eyed pop has become associated, for some listeners, with being cool.

Witmer spoke to us over the phone in the weeks preceding the release of her new EP, vom night. She sounds affable, if a bit weighed down. The EP arrives on the heels of gobbinjr’s debut full-length, manalang, and the new material finds Witmer newly exploring the perils of the solitary life. Still, she laughs easily and often, interjecting a bit of levity into her otherwise languid meditations on songwriting and process. Her main mode of operation is sarcasm—she writes songs with hooks like, “I just want the human race to die.” Witmer pens compelling, ship-in-a-bottle compositions, putting big, sad things into small packages—so much that she makes her loneliness sound appealing. Her work on vom night may well escalate her visibility, heightening the disconnect between a private, lonely artist and her growing community of fans. Listening to Witmer write her way through the contradictions is uplifting, even when her sadness isn’t.

How did you start writing and recording music?

While I was in high school I had this band, and someone needed to write the music. I really didn’t like playing covers. So I just found out that I was really quick at songwriting, I guess. I wrote a lot in a short amount of time, and I would come to every practice with a bunch of ideas. I ended up writing most of the songs for that band, and I just kept writing I guess.

Who were you inspired by when you were in high school?

Bands like Tame Impala and Oberhofer, where it just starts out with one person playing everything. I wanted to write everything I guess.

Why did you decide to leave Wisconsin and enroll in NYU’s music recording program?

I was really interested in coming out to New York in general. I lived in this little town outside of Madison, Wisconsin, and there isn’t really a good scene in Madison, Wisconsin. I just knew that if I wanted to make it in music, I would have to get out. New York was the best place to go. So I worked my butt off in high school, and I got into NYU. Then I got there, and I realized it wasn’t really what I wanted to learn. It was very much about the business behind music, and things were really going backwards for my career, so I left.

Was there a pivotal moment when you knew you needed to drop out?

When you say “bad images”…?

They wanted me to be a stoner chick, I don’t know. They were really into the stoner part of my image, and I don’t really want to promote that too much, because what I do is a lot more than getting high and putting words on a page. The Clive Davis program is definitely a different beast than other programs at NYU. They wanted me to have, like, mini-bong merch and stuff. It was very weird.

How do you navigate the duality between living in such a vibrant artistic community in New York, and this desire to do so much of your writing and recording yourself?

I think I’ve really got a good balance now. I’m in so many bands at the moment, and it’s awesome. I love playing other people’s music. I have gobbinjr to do all my songwriting and get that out of the way. I can be completely selfish with that project, and then all the other things I can kind of just groove on.

Who in the New York community inspires you?

I’m very inspired by Ava Luna. I haven’t talked to them at all. I’m terrified of them. They’re just so good. They’re so artistic, in what each individual member does. They’re just amazing. They’re the big one for me. Everyone I’ve worked with inspires me. I’ve worked with Vagabon, and that’s super exciting, and I get to tour with her. I work with my friend Hayley’s band, Human People, and they just have the catchiest, punk, straight-up rock songs. They’re really good. I’ve worked with a lot of great songwriters.

So how has your artistic process evolved from your first LP to vom night? Is there a shape to your growth as a songwriter?

I think there is. One of the songs was actually written while I was in high school, the song “Undies”—that was probably when I was 17. I changed it a bit, because I wanted to make it better. I learned a lot from my production class with Bob Power, which was actually amazing. The big difference between this EP and the last album is that I just got better at mixing and producing my stuff. Songwriting-wise, I think the lyrics are a lot more about why I feel so alone all the time, rather than assuring myself that it’s okay to feel so alone. That’s the biggest difference.

When you sit down to write, what sorts of things are you working through?

I really do think it’s a therapeutic process for me. It’s a lot of feelings that I normally don’t feel comfortable talking about in conversation that I usually end up writing about. So, I think humor might be an easier way for me to access those feelings. I think it’s really just trying to get to know myself better through these songs. It’s been really interesting.

How did vom night help you know yourself better?

I learned more about being alone. I guess that’s a bad answer. It’s really about appreciating the people I’m around when I’m around them. That’s a big factor in this EP. I think part of it is knowing that it’s okay to not associate with someone for a second. You don’t have to be always ‘on’ 100% of the time with someone you love. You’re allowed to have your own feelings and get to the truth. It’s something I definitely went through while writing this.

What’s it like to take these ‘intimate geographies’ out in front of an audience?

It’s always strange. Like, I’ll be talking to people after shows, and they know these very personal things about me and my personality, and I just don’t know them at all. It’s really strange. I feel very alienated a lot of the time. It’s good to know people are feeling similar things, but it’s also kind of sad, because they’re sad things to feel. It’s really sad talking to people about bad experiences in their lives. There’s a strong connection, but people do get the lyrics wrong sometimes. Like, people think songs are about my boyfriend or something, and that’s incredibly wrong because I’ve never had a boyfriend.

Even in your battle with this solitude, does your growth as a songwriter offer confidence?

It’s really nice to write these songs. I think I like them, but I don’t know if the world is going to like them. Showing them to my friends and having my friends say they like it, it’s a confidence-builder. I was a little scared after my last album that it was just going to be the end right there. Like, that’s best I could do, I’m done. It’s great to know people are still interested. There’s just this nagging voice in my head saying, ‘You’ve got to keep going, you’ve got to get better.’ That’s what the EP is also about.

Is there a tension between your desire for smallness and control in your music and the fact that this EP might be the one where you get more attention about these intimate things? Have you been approached by labels?

It’s a very interesting time for this project right now. I’m still in conflict, internally. I don’t know if I want to make this thing bigger than it is, but I also would like to pursue music professionally. I’d love to have that be my full-time job, which it’s not now. I don’t know what labels I want to look at or anything. I haven’t thought that far. It’s very strange to be approached by [labels]. I just don’t know. I think it’s probably a vision-thing. The whole point of gobbinjr was to be as true to myself as possible, which sounds really corny. I wanted to have something extremely organic, and I don’t know if I make this much bigger, if it’ll be organic.

What do you fear listeners will miss when they listen to vom night?

I’m pretty disturbed that people are thinking that I’m trying to glorify putting yourself down, which I don’t think is cool. A lot of this EP is very harsh, and my place in the world is not pleasant. But it’s very important to acknowledge these fears and move on and accept them, and be a better person. I don’t think that by writing about these things, I’m trying to be like ‘Oh this is really cool.’ I’m not trying to encourage other people to put themselves down. It’s very hurtful. It’s close to a part of me. I want it to relate to people, but I want it to be known that I don’t want people to think that this is cool. I get really freaked out about that. I get freaked out by that song “Firefly,” where it says, ‘I just want the human race to die.’ I get really weirded out when I sing that to live audiences, because I don’t want these people thinking that I want them all dead. It’s not the point. I don’t want people to take it personally, I guess.