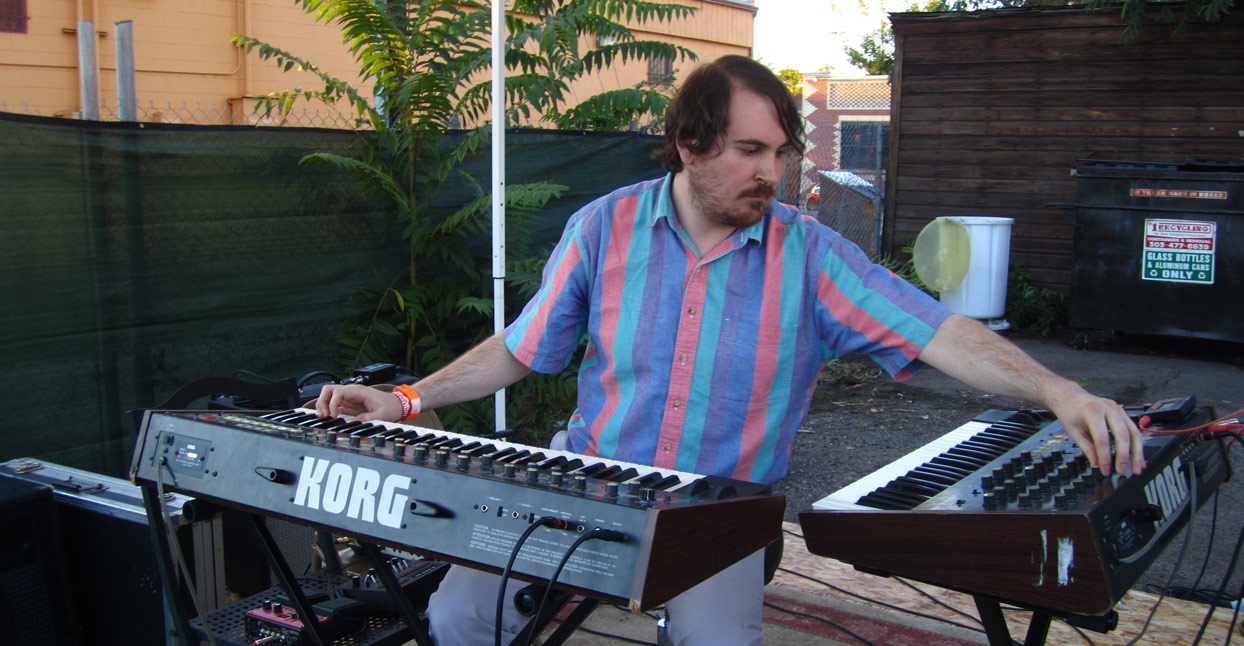 In the music he makes as Giant Claw, Keith Rankin distills the erratic world of 21st century internet culture into a string of increasingly strange albums issued by Orange Milk, the Ohio-based label he co-runs with fellow musician, Seth Graham. Using melodic keyboard lines, plunderphonic sampling, and incessant jump cuts, Giant Claw sketches out a jagged topography of the digital landscape. Over the last seven years, his music has incorporated everything from vintage movie synth scores to footwork and chiptune. “To me, pop music represents a sort of base reality in our culture,” Rankin explains from his home in Columbus, Ohio. “When a form of music is prevalent, it shapes how we look at reality—at least, it did for me. When I was young, I really loved pop music, and everything else I experienced musically was in contrast to that.”

After an initial string of decidedly less-bizarre albums, Giant Claw veered into stranger territory on his last two outings. 2014’s Dark Web turned split-second online trope samples into snappy juke rhythms, and 2015’s Deep Thoughts used video game sounds to create odd MIDI symphonies. His latest effort, Soft Channel, is both far more unsettling and decidedly more intimate. While he’s still dissecting a mass of samples and digital instruments, the source material is much more personal. Or to put it in Giant Claw’s own internet-informed parlance: If Dark Web was a Reddit page curated by a long list of users, Soft Channel is a Tumblr page.

“I was really trying to hone in on what I wanted to say with music on Soft Channel,” Rankin says. “Instead of making these more conceptual ideas come through, I wanted to get more personal values. It took two years to make this one.”

The original idea for the record was to slam together pop song snippets with chaotic sound design—“to really play up interrupting known structures”—but once Rankin started toying with a hi-res symphonic sound package, a more orchestral sound emerged. “It took me back to when I was younger, and that feeling of the simplest thing blowing you away. There was a cello sound that I was just playing by itself, and it was completely blowing my mind.”

And so while the original concept of jamming pop snippets up against punchy thuds and sharp sounds remains intact, the album also boasts soft layers of MIDI strings and flutes that, for Rankin, create a sense of childlike innocence and awe. Soft Channel is the record where Rankin’s countless musical interests dovetail; Giant Claw is no longer just a lab coat he dons to conduct musical experiments with mass culture, it’s a way for him to reconnect with his youth through idiosyncratic sounds and, by extension, to discover himself. Opener “Soft Channel 01” pairs a woozy R&B vocal sample with bassy body slams and serrated hi-def strings; it’s a brutalized vision of modern music that he’s been edging toward for years, cutting up modern sound to suit his wonky, hyperreal aesthetic. That desire to combine the strange with the familiar extends past Rankin’s work with Giant Claw, and into the Orange Milk label overall. Rankin also designs most of the label’s artwork, most of which centers around the idea of intoxicating dissonance, and experiencing reality in flux.

“When you think about advertising, you’re just bombarded with someone else’s version of an idealized life, in all media. For me, there’s this natural dissonance that occurs when some inner part of yourself inherently feels this clash with this idealized version of reality.”

As a counterpoint to his increasingly personal music, Rankin’s visual art remains “firmly utilitarian,” as he puts it. Often working in collaboration with other artists, his colorful, hyperactive digital art has defined Orange Milk’s distinct aesthetic. “I always listen to the music first,” Rankin says, “and I’m usually trying to do it pretty fast. There’s always a rush, but that’s mostly self-imposed.” Outside of a “painting class in my 20s,” Rankin is more or less self-taught. “I used the internet a lot to replace a lot of the formal studies.”

He started making album art more or less in parallel with the development of vaporwave in the 2010s, just as Orange Milk was getting started, and his visuals make use of the genre’s usual garish color palettes, rejected early digital aesthetics, Black Lodge-like classical statues, and abstract 3D digital shapes. “I really loved album art by groups like Boredoms, but to be honest I was more influenced by surfing Tumblr and being online and collecting images. I just started doing covers out of necessity. I never intended it to then consume all my time. There’s still a traditional side of me that loves finding a really balanced composition and a good color palette. To me, that’s still at the heart of a lot of the visuals that I do.”

As with the music though, the art for Giant Claw’s latest effort is more complex and less, to use Rankin’s own word, utilitarian. Like both Dark Web and Deep Thoughts, the art for Soft Channel comes from an oil painting by his partner Ellen, based on a digital mock-up collage that he had made. Dark Web’s cover nodded to the album’s fucked-up vaporwave aesthetic, depicting a classical statue standing beside an that was orb farting out pink, squelchy liquid; Deep Thoughts’ art acknowledged its N64 instrumentation by littering a Nintendo-like oceanside scene with melting Dali-esque shapes. Soft Channel features a Japanese girl looking into a mirror, her reflection not matching reality, as a floating grey head stares from behind her.

“The reference image I used originally was from this old Japanese TV show called Daughter of Iguana. The female figure in it is basically rendered from this promotional image for the TV show. The show is about an iguana who sees a man and falls in love, and then God turns the iguana into a human. So the iguana and the man fall in love and have two kids, and one of their kids, when she looks in the mirror, sees an iguana—but everyone just sees her as a human. It’s this crazy concept for a show, and I was just watching it on Dailymotion or something, and the central theme of the show was really hitting me hard—about the role of identity, and how you’re oblivious to how other people see you. That disconnect creates a lot of trouble for people.”

On Soft Channel, Rankin heals that disconnect, one orchestral hit and wildly-garbled sound sample at a time.