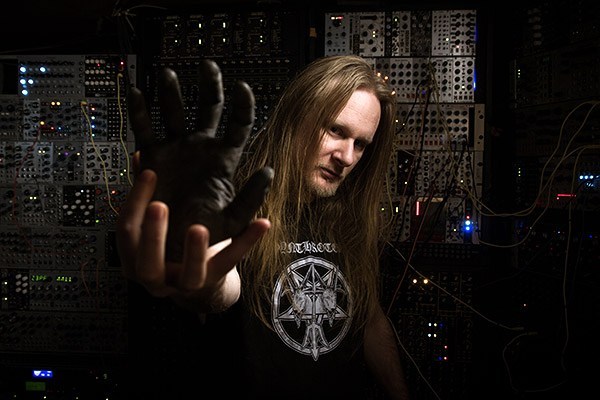 “I was in a pretty happy place making this record… To me, it’s a joyful record.”—Aaron Funk

Over the last few years, the Turing Test has gotten a fair amount of play in popular culture. It started with The Imitation Game, a workmanlike biopic about the man who gave the test—which determines whether or not a machine has become sentient—its name. It turned up more menacingly in last year’s Ex Machina, in which Oscar Isaac and Domhall Gleeson employed it to determine whether or not an android had developed a murderous streak.

And up in Winnipeg, Manitoba, Aaron Funk, who records as Venetian Snares, conducted a Turing Test of his own. Funk’s version involved a sprawling, wall-length modular synth, a towering piece of machinery that looks more like the circuit board on a ’70s spacecraft than a musical instrument. Playing one is uniquely challenging: The artist uses patch cables to connect multiple modules to one another, essentially designing a sound on the fly by linking oscillators with filters with modulators. The larger the number of modules in the synth, the greater the number of variables that go into each sound, and the more unpredictable the final result. Depending on your perspective, the process is either thrilling or maddening. The way Funk describes it, it’s like a chess game between two equally-matched opponents.

“Basically, I would start with an initial idea and throw it at the synth,” he explains, “but then the sounds the synth throws back at you sets you off in this totally different direction.” Every time Funk patched one unit of the synth to another, the resulting sound opened up a series of further possibilities that he had to react to. “It is like communicating—like a call and response with some other entity. I’m allowing this thing to make a choice, based on an array of options I’ve constructed.” The results of this conversation can be heard on Traditional Synthesizer Music, Funk’s 23rd(!) album as Venetian Snares, and one entirely composed and recorded live, in real time, on his modular synth. Nothing was mapped out or pre-planned. The sounds that turn up on the record are the result of specific choices Funk made while the song was being recorded—which oscillator to patch into which section of which filter at which moment—and, therefore, can never be duplicated or recreated. What you’re hearing, every time you listen to it, is Funk and the machine sparring.

Sparring comes naturally to Funk. He has a reputation for having a contentious relationship with both the press and his own audience (a reputation bolstered by a recent, lengthy, occasionally prickly interview with FACT), but speaking via Skype, he is jovial and agreeable and, when it comes to describing the process of making Synthesizer Music, open and enthusiastic. “I guess what I found really exciting about it were the limitations,” he says. “I kind of liken it to making chiptune or something. When you make chiptune, you’re basically like, ‘OK, I have a Nintendo, so I’ve got a couple pulse waves, a triangle wave, and some really crappy 1-bit samples. Let’s see how far you can go with that. How expressive can I be with that?’ Obviously, I had a lot more to work with than that. But it was an interesting exercise in compromise, having to be like, ‘OK, I have 3 oscillators left, but I want to have this other sound, too. So this sound is only allowed to use 1 oscillator.’”

All of this sounds incredibly heady, but the final product is anything but. If anything, what is striking about Synthesizer Music is how visceral it is. A decisive step away from Funk’s previous work, much of which incorporated hazy samples, skittish, frantic rhythms, and dizzying flashes of sound, the songs on Synthesizer Music instead lurch and groan, feeling almost haunted and otherworldly. In “Magnificent Stumble,” deep blue synth pulses suddenly give way to quick, darting, needlepoint notes. On “Decembers,” a strangely calm synth pattern flickers above a rhythm track that sounds like four jazz drummers having a collective epileptic fit. And “You and Shayna” moves forward deliberately, deep bass notes arriving in clusters of five, eventually pulverized by a percussion track that slices up the center like a cluster of Chinese throwing stars. “I was in a pretty happy place making this record,” Funk explains. “To me, it’s a joyful record—it sounds like the soundtrack to my own adventure in some invented game world.”

That joy arrives after a particularly turbulent couple of months for Funk. In August of last year, he posted a cryptic but grim message to Facebook, stating, “I am suddenly in very serious financial trouble, if you’ve ever enjoyed my music, I badly need your help asap.” At the end of the post was a link to Funk’s Bandcamp page. Within 24 hours, Venetian Snares albums were occupying every slot in Bandcamp’s Top 10. “That really flipped my perspective,” Funk says. “I’d been going around feeling like, ‘Man, people see me as some entertainment thing.’ It was wild to realize that people can care about an artist they like as a human being. They can relate to them.” He pauses, before quietly adding, “And that was really touching. Really, really touching.” Funk was so overwhelmed by the response that he released an album, Thank You For Your Consideration, for free, to show his gratitude.

And in a way, that outpouring of support is its own kind of Turing Test—genuine humanity emerging, generated by the way Funk manipulates machines. “When I’m making music, I feel like I’m seeking,” Funk says. “I’m going into music and just looking for where it will take me. It’s an adventure to me. And I think if that’s my role—seeking—then it’s also my role to bring back whatever I discover. And maybe what I bring back should be inspiring to other people, in some way.”