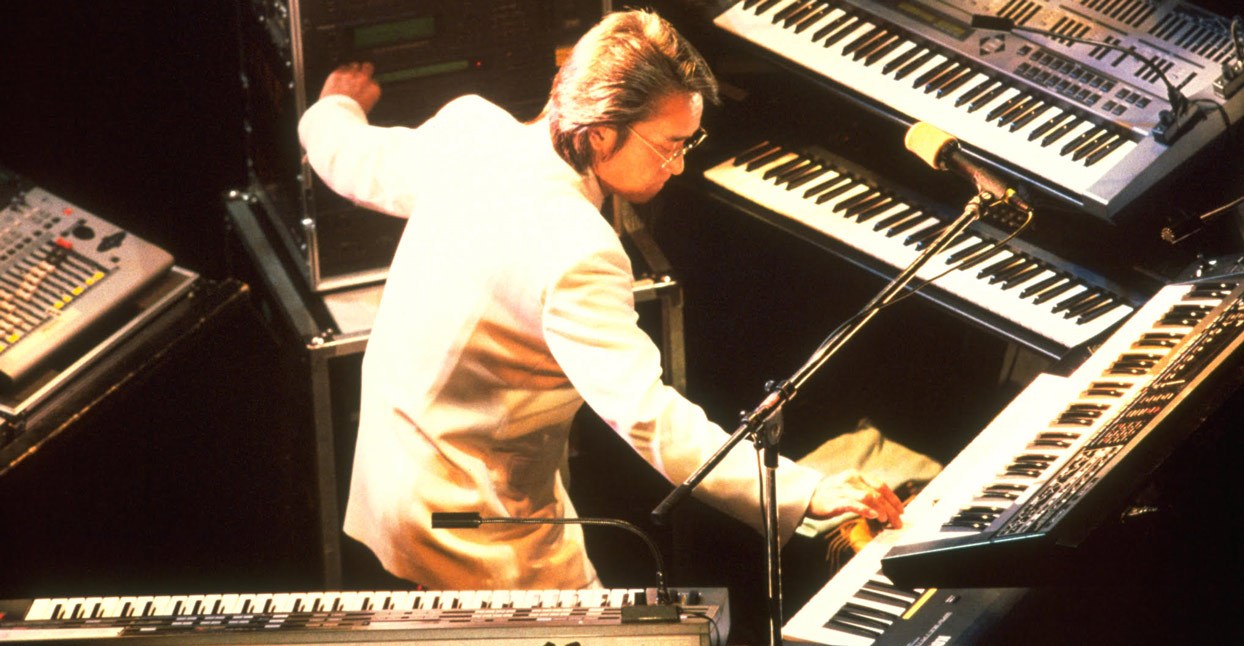 The many careers of Fumio Miyashita—actor, art rocker, martial arts expert, ambient musician—are the product of a man who was almost supernaturally disciplined. Born in 1949 in the mountainous Nagano Prefecture, some 150 miles northwest of Tokyo, Miyashita began studying karate at a young age and was a black belt by the time he was in high school. After a brief stint in a grand-scale production of Hair in Tokyo in 1969, Miyashita led a fledgling band of street musicians through a series of rigorous rehearsals that turned into Far Out, a prog rock outfit as muscular as Meddle-era Pink Floyd (Miyashita wrote and sang the group’s epic songs). That group was quickly reconfigured to become the synth-heavier Far East Family Band, and by the start of the 1980s, Miyashita was recording solo synth music almost exclusively. He spent the rest of his life steadily recording this therapeutic music, selling hundreds of thousands of tapes and CDs. “He used to say that he didn’t sit down to compose music,” explains Miyashita’s widow Linda. “It was something that was a gift from nature.”

Linda first saw her future husband Fumio by chance at the customs gate of the Tokyo airport, when she was returning from a trip to Hawaii (he’d been traveling with Joe Yamanaka, the lead singer of Flower Travellin’ Band). They were later introduced via mutual friends, and Fumio invited Linda to a concert in a park. “During the birth of the Japanese rock movement, the bands would have outdoor concerts every weekend at Hibiya Park in Tokyo or Maruyama Park in Kyoto,” she says. “Nipponjin [the debut Far East Family Band LP] was an incredible album conceived watching the sunrise after one of those concerts in Kyoto. It was a completely new type of music for a Japanese band and, to use a phrase from those times, it ‘blew your mind.’”

By the time Linda saw them, the Far East Family Band had recruited its first keyboardist, Akira Ito, and soon added second, Masanori Takahashi, better known these days as Grammy-award winning New Age artist Kitaro. The group’s sound had mutated from earthy longform prog to scale new cosmic reaches. With production assistance from German kosmische pioneer Klaus Schulze, the group recorded the monolithic Parallel World, recorded in the same studio in Oxford, England where Mike Oldfield made Tubular Bells. After the album’s lukewarm reception, the group disbanded and in 1977, Fumio relocated to California.

“When Fumio moved to the States in 1977, he already had his own synthesizers that he was experimenting with. I think going from a progressive rock band to synth-based spacey music to relaxation music to healing music was just a very natural progression for him,” Linda says. After suffering a back injury caused by falling off the stage, Fumio began treatments in shiatsu and acupuncture to ease the pain. He was also working on music, incorporating sounds he recorded in his native Nagano Prefecture before he left. “These included various birds, water, trickling stream, wind, etc.,” Linda says. “He made a tape of this music and gave it to two Japanese brothers, the Otsuka brothers, who practiced acupuncture in California. The older brother remarked how the acupuncture worked so much better on his patients when they were listening to [Fumio’s] music.”

After the Miyashitas returned to Japan in 1981, Fumio would spend days or even weeks in his Biwa Studio, focused on making this new type of “healing music.” As with every project he took on, Fumio dove into the work with gusto. “When it was time to mix everything, he would stay up all night, go to bed in the morning, and start over the next day with this process until as long as it took to finish,” says Linda.

Earlier this year, one of Fumio’s songs appeared on the Light in the Attic compilation Kankyō Ongaku, where it caught the attention of Mari Ayabe from Brookly-based label, Personal Affair. Coincidentally, Ayabe was friends with Fumio’s son Jody, and he contacted Jody about reissuing some of his father’s work on vinyl. “He’s been wanting to release Fumio’s works on LP for a long time,” says Ayabe, “but in Japan, it wasn’t a popular enough genre.”

Personal Affair asked Jody himself to pick an album from the roughly 130 in Fumio’s discography, with the only stipulation being that it needed to be “from the early ’80s and spacey.” Jody selected WAVE, one of the first releases on Fumio’s own Biwa Records in 1983.

It’s an apt choice. WAVE is an archetypal work of healing synth music. Miyashita weaves lilting, heavenly melodies over drones in keys designed to generate a feeling of peace and serenity. Recorded in the Japanese mountainside, over 3,000 feet above sea level, the music abounds with healing qualities; lengthy opener “大地 Mother Earth” opens with a long caress of the F chord while Miyashita’s right hand wanders peacefully up and down the keyboard and off into the astral plane. The closing title track takes an alternate path to similar ends, revisiting the same key with massive washes of cool keys that trickle down slowly, like ice cubes melting down the back.

Fumio passed away in 2003, but Linda continues to utilize the healing properties of releases like WAVE in her daily life: “I still like to put it on and listen quietly while laying down, maybe sometimes before sleeping.” She also recommends Fumio’s music as a background for everyday life—there’s no need for it to interfere with your daily schedule, she insists. Your body will still benefit from the sound waves.

“I asked him about it once, and he said this particular selection was done in the key of F, which is the heart chakra,” Linda says. “Fumio always explained how we experience music with our bodies and not only our ears. I just know that his music had a very good affect on different people—whether they were feeling stress or unhappiness or pain or tiredness, or feeling good.” And in the end, it’s that ability to make people “feel good” that is Fumio’s lasting legacy.