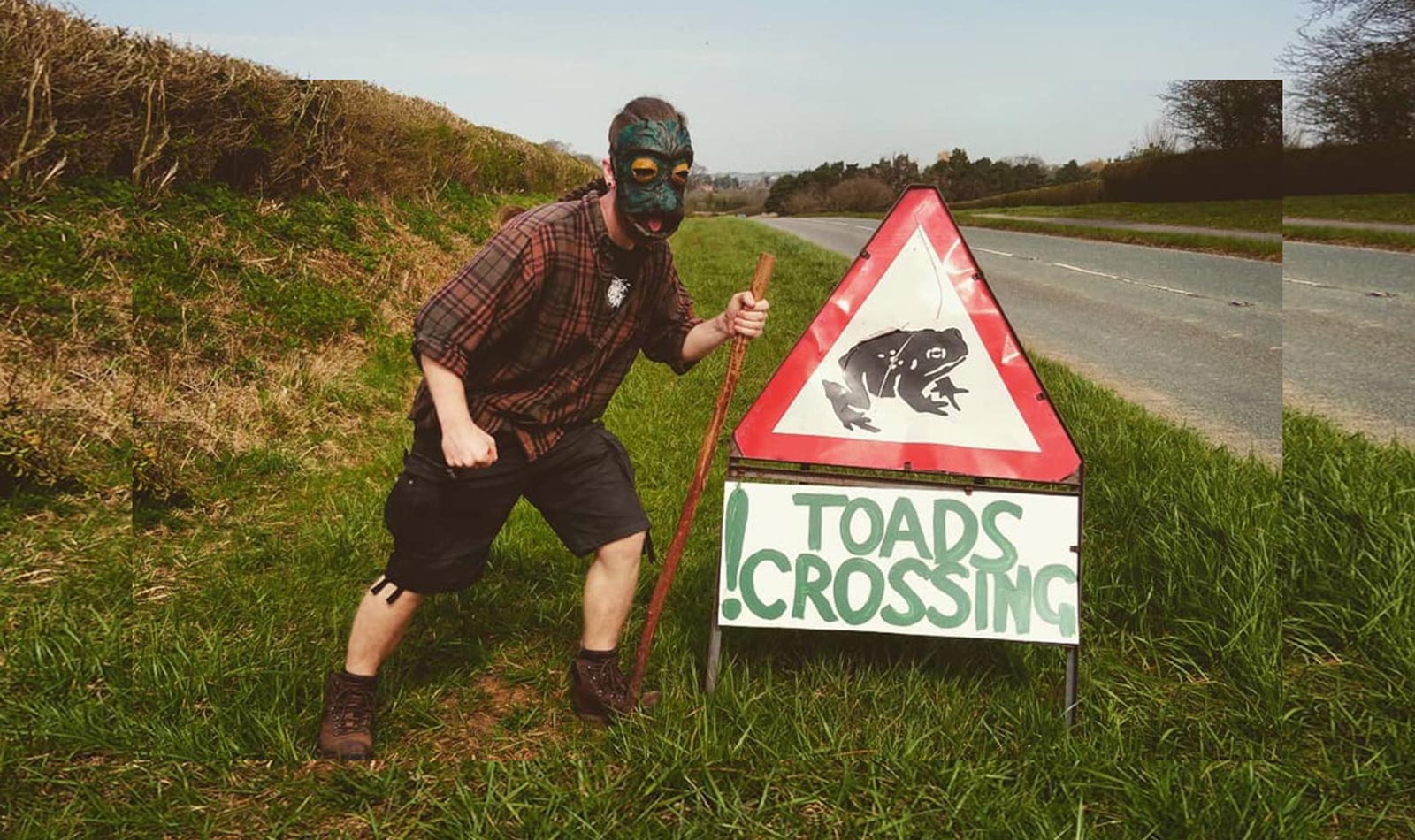 The video screen crackles to life, and a grainy visage of green rubber fills the frame.

“I’m Froglord. I come to you from the Great Mystic Swamp.”

The expression on the man’s face is hidden by the cheap frog mask that he wears whenever he’s publicly promoting his solo sludge project Froglord, but you can sense a wry smile by the tone of his voice. He’s serious about his music, but he isn’t above having a laugh at the absurdity of its amphibious mythos.

Started on a lark in the grim early days of the pandemic, Froglord’s discography has since swelled to include a pair of EPs, a standalone single, a split, and two full-lengths. The Mystic Toad is his newest album, and it’s a masterclass in swampy, sludgy, stoner doom. It also enriches the project’s ongoing narrative storyline, inspired by old-school creature features, internet memes, and its maker’s background in environmental science.

“The Froglord is this ancient Lovecraftian creature who awakens every 10,000 years in the mystic swamp, and he’s sent by the old gods to maintain the natural balance of Earth,” Froglord (the man) explains. “When he awakens in this iteration, he finds out that the humans have created all this massive environmental destruction. He’s gifted with the ability of death ray vision and ectoplasmic slime, so he goes out to the humans and basically tries to wipe them out.”

As environmental allegories go, a giant frog wiping out humanity for its transgressions isn’t especially subtle. Amphibian populations are declining worldwide at unprecedented rates, and, per a 2019 Yale study, the number of species that face extinction risk is much higher than accounted for by previous estimates. Froglord stands up not only for these existentially threatened frogs, but for the entire planet—humanoids excluded.

“On The Mystic Toad, it’s all about aliens from Saturn coming down to try to harvest the Earth for their special space minerals, and they’ll have to burn down the Amazon to do that,” he explains. “But Froglord can’t allow that.”

Conservation is not just a lyrical conceit for Froglord—he’s also put his money where his vocal sac is. In February, he released the Save the Frogs EP, a collaboration with the environmental nonprofit of the same name. It’s raised over $1,600 for the organization to date, and he’s already discussed plans for future charity releases with Save the Frogs founder Dr. Kerry Kriger. Environmentalism has always been woven into the fabric of the project, but Froglord is careful not to make it the sole focus.

“When I started on the first EP, it was meant to be this fun, goofing off thing, even though there was an environmental message there,” he explains. “It was when lockdown first started, and there was a lot of doom and gloom. I was like, ‘Let’s have a bit of fun, and maybe this dumb frog meme thing will cheer some people up.’ If you want to come here for just a good time, that’s great. If you want to get invested in the environmental stuff, that’s even better.”

The music on the Froglord records echoes their lyrical subject matter brilliantly. Thanks in part to the sweaty grooves of New Orleans bands like Eyehategod and Crowbar, sludge metal has long been associated with the swamp. Froglord fuses the sweltering atmosphere of those bands to the bong-ripping stoner doom of Sleep and Electric Wizard, seasoning the resulting cosmic gumbo with ’60s B-movie samples and field recordings of frog calls. It’s an immersive listening experience, and Froglord is only just beginning to explore how far it can go.

“I’ve got like five albums’ worth of storyline planned out in my head,” he says. “There’s no shortage of ridiculous places that I think I can take this.”