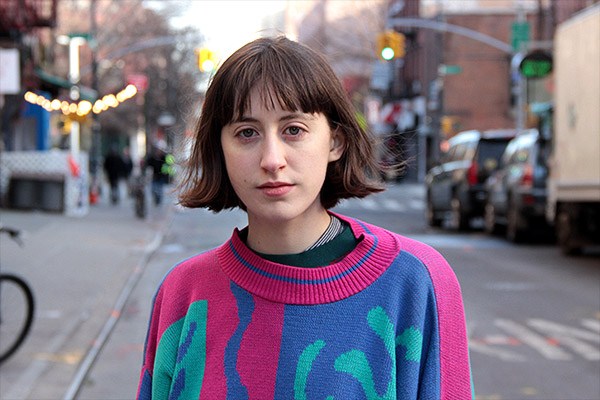 “I think some music is like a book, in that it only gets better over time. Maybe that’s just a special secret inside view.”—Frankie Cosmos

The term ‘indie pop’ is often used as a catch-all for bands trying to capture both the aesthetic and the emotional timbres of major-label pop music with the limited resources available to them. Good indie pop inspires all the same feelings pop music does: youthful abandon, a tenderness that masks sexual frustration, and grand despair. But it leavens them with rebellion, raw passion, and independence from the corrosive adult world.

Frankie Cosmos—a band, but also the pseudonym of songwriter Greta Kline—has perfected that balance. She’s mastered classic pop tricks, but she’s filtered them through a sound that’s reminiscent of the homemade releases that defined K Records in the ‘90s. On her new album, Next Thing, Kline relies on understatement, writing lyrics about the minutiae of everyday life, as well as the moments when that smallness opens out onto grand vistas of deep emotion. The fact that she’s made 40-plus albums (many of them clocking in at under 25 minutes) suggests that she has built a world that is both lived-in and deeply explored.

I met up with Greta and her keyboardist Lauren Martin in the courtyard of a hotel at SXSW. We chose this spot because it seemed geographically removed from the festival’s madness, but it was no use: by the time we met, it was overrun with out-of-towners. Something similar may be happening to Kline herself, as more and more people find their way into the private world of Frankie Cosmos. The challenge Kline faces is whether the newfound attention will weaken her music’s strengths, or amplify them.

Listen to the exclusive premiere of Next Thing:

Ezra Furman: I feel like the best DIY stuff—your stuff included—makes me feel as if the artists have created their own world, one that’s insulated from the BS. We were talking about Krill, the band my brother was in—I feel like they did that. But I don’t know how much of an illusion that idea is. Do you feel like you have an insulated world in some way? Or do you think you’re as mired in the day-to-day as anyone else?

Greta Kline: I don’t know. I definitely don’t know anything about current pop culture, so in that way, I feel lucky that I’m not being influenced by what’s cool or trendy. I feel pretty certain that what we make is very pure and instinctual. And that’s a really good feeling. Like Krill—the stuff that they’re talking about is timeless. It’s like a book. It’s not ever going to stop being cool to read a book. Books only get more important over time. I think some music is like a book, in that it only gets better over time—or more recognized. It never goes out of style if it’s good or special. I feel that way about a lot of my friends’ music, so maybe that’s just a special secret inside view. Maybe other people see it and think, ‘This is hipster BS,’ or something.

Can you talk a bit about your musical philosophy? Are you a minimalist, or an amateurist? Are either of those words ones you would choose?

No. I think I’m just doing whatever I want all the time, and I don’t want to be boxed in.

Well, part of what I wanted to ask is if you feel intentional. Did you come to making music thinking, ‘I want it to sound like this,’ or does it kind of accidentally or naturally turn out the way it does?

I think it just turned out that way. I mean, I think the things I listened to affected it. But hearing people record albums in their house made me think, ‘Oh, I could make an album in my house! On GarageBand!’ I’m not emulating it, but it allowed me to feel like I could record an album on my computer. So it’s not like, ‘Oh, [this would be] a good brand.’ It’s not coming from a place like that at all, because I had no idea that anyone would ever hear my music when I started making it. So yeah, I think our recordings are probably only gonna get more informed. I think when you start out, you just do what you can.

I was wondering how you relate to the concept of a “throwaway” song. Do you feel like you have throwaways?

Oh yeah, I have a lot of throwaways. It’s a new thing for me, because I just started being on a label in the last year. In the last two years since we put out our first vinyl record [Zentropy, 2014]—that was our quote-unquote “first full-length,” even though it was not a full-length and not our first thing. And the really small label [Double Double Whammy] who put it out, who are our friends, were like, ‘Hey, could you hold off on releasing music like it’s vomit?’ So I was like, ‘Okay,’ and I only put out two tiny little other demo things that year.

Did they use those words?

No. [laughs] I don’t want to misquote them. They were really nice about it, but they were like, ‘Y’know, we want to sell the record that we just put all our money into.’ I was like, ‘OK!’ But, yeah, I used to put out music literally once a month—put out 10 demos and treat it like it was finished. But now, in the last two years, I actually have songs on my computer and they’re not out, and that’s weird.

Oh yeah, I’m still generating, I’m just holding off. And being more decisive about, ‘This one deserves to go to full-band, go on a record,’ etc. The record we have coming out in April, some of the songs are three years old, but I chose them very carefully. I was like, ‘I know we’re gonna have to tour with these songs for at least a year. So do I want to fucking play them every night?’ You know?

Some people are frustrated with that dynamic: you have to wait. This is your one record for two years or whatever. Actually, I’m fucking frustrated.

I think everyone probably is.

But there is also some hope that it’ll make you better, and force you to make the one record better than the many. But that’s album-centric thinking.

Well, then it becomes kinda corporate, like, ‘I wanna sell my record,’ versus, ‘I just wrote this song and it exists.’ And that’s not related to being a professional musician at all. Writing a song, just having done that, doesn’t matter. Because it’s not gonna be heard unless you go through this process, you know?

I was wondering if you’re reacting, in your new stuff, to the fact that more people have heard of you, and you have a “full-length LP debut” that people are talking about. “Sometimes I Get Sinister” sounds like you pushing against an image. Or, “Have You Heard I’m So Young?” from the EP [Fit Me In, 2015]. It’s a reaction in some way.

Yeah, it is. I think part of me is reacting in the way I’m writing about it, because it’s my life, and that’s all I can write about with authority. But I’m also trying really hard not to react to it in terms of the music itself. I’m trying not to be like, ‘Ooh, here’s the song, it’s going to be a single.’ And that’s really hard for me, knowing that people are going to hear it. Because all the past records, I didn’t know people would hear them. So this time it’s like, people are going to hear it, it’s gonna have three singles, I’m gonna talk about it in interviews, we’re gonna play it on tour for however long. There’s all that stuff I know about it. But trying to not let that affect it has been a really interesting test of my will.

I hope so! Of course, I’m writing about the experience, because that’s my experience. The next album, insanely, is gonna be about touring, because all I do is tour. So is that bad? Is that a boring album?

I can’t be thinking, like, ‘Is that gonna be a boring album?’ Because I don’t fucking care what people think, part of me. You know? But also I do, because I want everyone’s job to be being in this band, and that’s it. So it’s a weird thing to balance.

You don’t want to craft it by micro-managing people’s expectations.