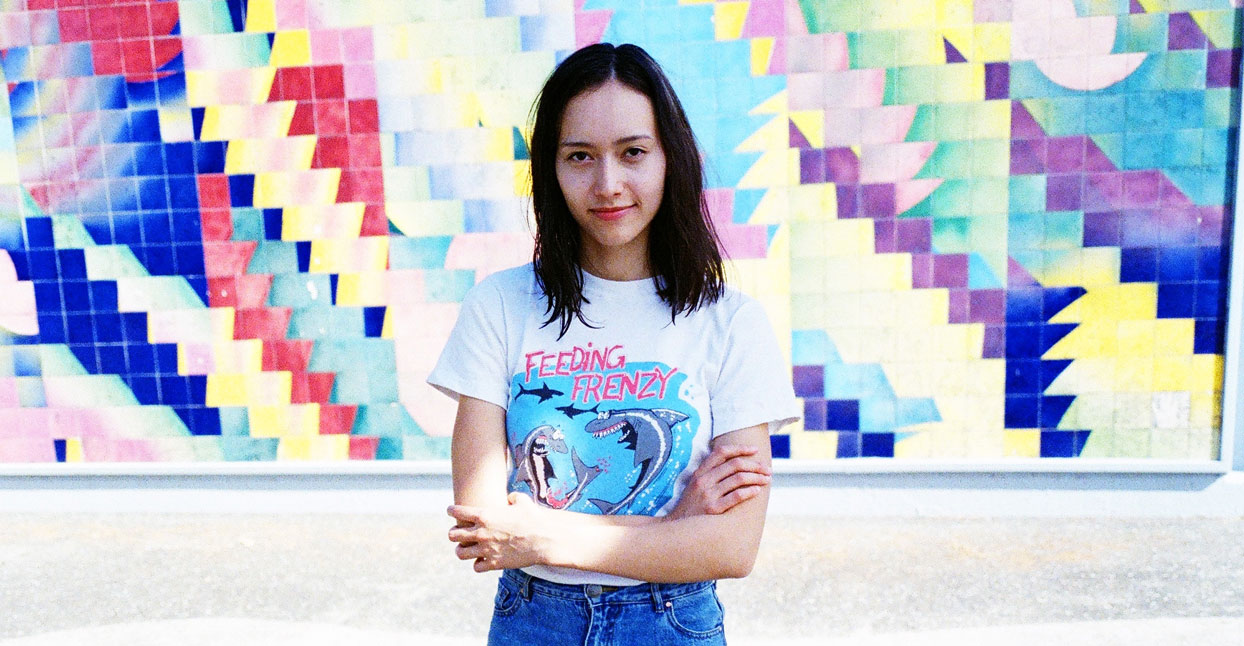 The music of Amelia Murray, who records as Fazerdaze, is on its surface bright and summery. Pick any track at random from Morningside, her excellent full-length debut for Flying Nun, and you’ll be greeted by foamy waves of guitar and Murray’s warm, sighing voice. But zero in on the lyrics, and the sun begins to fade. A portrait of romantic uncertainty, Morningside rests Murray’s emotionally-candid lyrics in silvery latticeworks of guitar, and the resulting tension is one of the things that makes the record so alluring. (It was one of our Essential Releases the week it came out.) A step up from her excellent, self-recorded, self-titled 2014 EP, Morningside is the sound of a person who—as Murray herself puts it in her song “Little Uneasy”—is feeling their way through the world, in every sense of the word.

We caught up with Murray during her shift at the New Zealand record store where she works to talk about the importance of the DIY scene and the difficulty of balancing softness and strength.

Well, I haven’t been part of that scene for a while, and I’m not sure what state it’s in right now, but when I was growing up, there were gigs in the city [of Wellington] every Friday night. There were two underage venues, and I remember seeing really great bands there. The scene was very small, but it was enough to get me and a lot of my friends into playing in bands and playing shows. Before that, I didn’t even know that playing music was an option—I had been listening to a lot of Bob Dylan and a lot of Beatles, and as much as I really loved it, it all just seemed so far away. I ended up starting a band with four other girls, and that was where I learned how to write songs and how to arrange songs. Even though the music we made is a little embarrassing to me now, that experience was so essential to me, in learning the groundwork for being a musician.

Morningside, your new record, was released by Flying Nun, which is a fairly legendary label. But it seemed like every piece of press that I read about both you and another recent signee, The Courtneys, went out of their way to mention bands like The Clean—who neither you nor The Courtneys sound very much like. I was wondering if it’s frustrating to be an artist in that situation.

I think about this a lot. I’m honored to be part of this legendary label, but at the same time, it’s quite important to me to not just rehash the past. I want to make sure I’m doing music that fits into 2017. What I’m doing can only really exist in 2017—recording at home, releasing on the Internet, building my own fan base. I mean, if I’m going to be compared to any band, it’s awesome to be compared to The Clean or The Bats. But I don’t think me or The Courtneys are derivative of either.

You named the album after the town where you now live.

Yeah, it’s the name of the suburb where I live. I finished the whole album there. I remember the day I got my first letter in the mail to my new address—I just felt so happy to be there. I was just in such a bad rut, and when I moved here I finally got out of it. I finished my EP at the end of university, and I’ve been out of university for two years now. So the last two years, I’ve been drifting, figuring things out, making lots of mistakes [laughs]. And so now, I finally finished this album, which I’d been slaving over—it just felt like I’d come through something. Morningside seemed to encapsulate me moving into a new stage of my life.

Going into this record, what were some things you knew you wanted to do differently from the EP?

I sort of see this album as being an older sister to the EP. It was just diving a little bit deeper into where the EP was going. I don’t know if I changed too much about my approach, I just further explored.

You made this EP by yourself, but there were a few more people in the mix on this one. How did that change your process?

Having other people around allowed me to push myself a lot more and to experiment a lot more. I was really worried about the first track, “Last To Sleep,” and having a few people to show it to and have them encourage me made me a little bit braver. I wasn’t so alone. I could get instant feedback.

I wanted to ask about that song, actually. The lyrics to that song—you don’t really hold anything back, emotionally. You put all of your doubts and fears and uncertainties about love front-and-center. Were there ever moments that you were second-guessing that?

I definitely worry about that. It scares me. Ultimately, I write the songs for myself first, and it freaks me out a lot. But I kind of trust that if I’m being really true to myself, then hopefully other people will be able to identify it in their own way. And if people don’t get it, that’s OK too, because I can’t really change who I am or how I feel. I trust that being yourself will bring the right people into your life.

I do think there are a few songs on this album where I’m quite scared of loving someone. Really falling in love with someone makes you really vulnerable, and that freaks me out. It freaks a lot of my friends out as well. Because it puts you in this position where you could be really hurt. So that song is about that situation.

That’s a tricky type of song to write, because rather than just writing a straight love song, what you’re trying to do is put shape around these indefinite feelings. So you’re afraid, but you’re happy at the same time. Striking that balance is hard to do.

A lot of the love songs on this album—like that track, and maybe ‘Shoulders’ as well—I’m not looking at the other person so much as I’m looking in a mirror back at myself. So they’re kind of love songs, but they’re inwardly-focused. I’m trying to figure myself out rather than pushing all of the focus on the other person.

‘Shoulders’ is one of the other songs I wanted to talk about. You get at this strong emotional content in the song, but you do it through a series of images rather than through literal narration. It feels more like looking at a photograph of someone lying in bed.

When I was writing that, I was trying to describe a scene in my head, and the feeling that came with it. So the song comes from a visual place. I put that into words, and then I refined it to as few words as I could, while still getting across both that image and the internal feeling.

On the other end of the spectrum, ‘Lucky Girl’ is such a bright, buoyant song. Did you go into that song with a sense of optimism, or is there a darker subtext that I’m missing?

I think on first listen, that song does sound overtly happy. But I did try to put in an undercurrent of uncertainty. It’s the same thing—being afraid of getting close to someone. It’s almost like I’m trying to convince myself that I’m a lucky girl.

Artists often describe records as a snapshot of a moment in their life. What do you hope Morningside captures about your life right now?

I think the thing I’ll feel proud about when I look back on this in twenty years is that there is strength in the album, but there’s also sensitivity and softness. I’ve struggled with that my whole life—how do you get through life being a sensitive, soft person? Life isn’t made for people like me. And so Morningside symbolizes those two things to me—the softness and the strength.