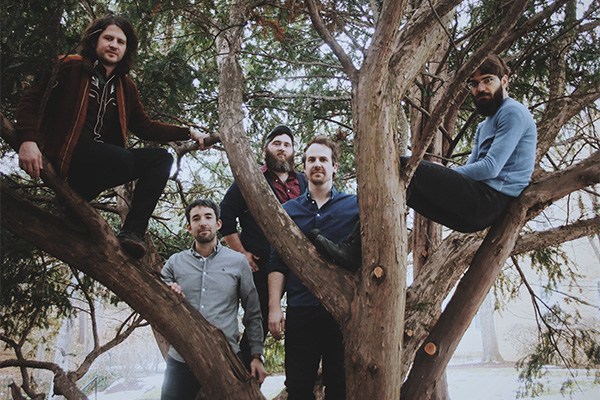 “I’ve always felt like I could say anything I wanted without repercussions, and that’s been true my whole life.” — Ryan Walsh

Welcome to the first edition of Fan Interviews where, as the title implies, a fan interviews an artist that they love. My name is Jeremy, but my mom calls me “HI54LOFI”, and I’ve been tasked with finding a fan to ask some questions to one of their favorite artists.

The first fan to kick off this series is Jon Doyle (one of the two brothers Doyle who power the excellent music blog Wake The Deaf). We paired him with Ryan Walsh from the brilliant Boston band Hallelujah The Hills to discuss their new album A Band Is Something To Figure Out. They also discussed Walsh’s upcoming book about Boston in 1968, Twin Peaks, Taco Bell, and other things that only a dedicated fan would ask.

[Want to interview your favorite band on Bandcamp? Email us at ‘writers@bandcamp.com’ and let us know!]

Hello Ryan! Thanks for speaking with me. You’ve just put out your latest album, A Band Is Something To Figure Out. What’s your general emotion when you set a record loose into the world? Is it unbridled joy? Paternal anxiety? Crushing existential dread?

I think pride, skepticism, and wide-eyed wonder all apply. However you may perceive the album you made, that’s never quite how others see it. So even when people have the reaction you hoped for—a positive one—it’s always coming from an angle you didn’t expect. Making albums, which are essentially musical packets of information, is a weird, weird way to communicate with people.

If I was pushed to summarize your music, I would probably say something about how the songs seem very much of the now, and also how the songs feel somewhat dystopian. Are we living a dystopian present? Do you think the songs are dystopian at all?

That’s great. I think they sound like now, too. There’s a trend going on right now, I noticed: guitar-based bands are becoming less important (which is fine, I’m not railing against that), so there’s this tendency to connect any melodic-guitar band to either the ‘90s or the ‘60s. Now that I’ve mentioned it, you’ll notice it too. I’ll leave it up to you and others to figure out the implications of that.

So the present moment is super strange. Is it dystopian? I’ve always felt like I could say anything I wanted without repercussions, and that’s been true my whole life. So until that changes, I would hesitate to call these times dystopian. I definitely opened this album thinking about what it would be like in that scenario, though.

I can’t quite decide if you’re attacking or celebrating the absurdities of society, but you definitely explore the contradictory and banal aspects of our culture very well. Something I often wonder: How much can an artist draw directly from a world which feels, at times, like it’s out to undermine every clever exaggeration an artist can come up with? Do you ever find real life too ridiculous to use it artistically?

No, life is the perfect amount of absurd, and it can always be successfully mined to create amazing things. If it’s too satirical to satirize, you gotta just stop using satire. There’s plenty of tools in the toolbox, and they’re all the perfect weapon for some future month or year.

It’s fair to say symbolism is pretty important to this album (one of the tags you used on Bandcamp is ‘hieroglyphics’). While you’ve done more than enough to ensure that even a listener who actively ignores the lyrics can still have a good time, I wondered how much you’d like people to delve into the secrets? Do you think a degree of work should be expected of listeners, if they want to get the most out of an album?

The lyrics will totally stand up against all kinds of intense, deep-read analysis, I think. I’ve made sure each album belongs in the same world, and you can start to paint that world if you’ve actively listened to the lyrics on each album. I was trying to remind people of that when I referenced stuff from our 2007 debut on the opening track of this album.

One of the things I’ve always tried to do is create songs that can function as a utility player. I hope people can either dance or fist-fight to our music, and not be taken out of that moment by the lyrics. But if they do want to spend time with the lyrics, the songs are available for that kind of evening with you. I do enjoy the idea of the listener exploring our songs like someone with a flashlight, walking inside a pyramid.

Is there one answer behind the symbols and references on A Band…? If I was to really dig into it, am I going to end up summoning the Holy Guardian Angel? Or curing the common cold?

Well, the title of the album can be taken a bunch of different ways. But one of those ways, which is the most literal way, I’ll say this about: it’s important to note that the phrase should be thought of as coming from the listener’s mouth just as much as it should be thought of coming from the band’s mouth. So, when I say, ‘A band is something to figure out,’ one thing i mean is, ‘Hey, I let my subconscious do a lot of heavy lifting here, and then I try and understand it with my conscious mind during the editing process.’ So, during editing and refining, I figure something out about what we’ve made, and then when I read our fan’s interpretations, I figure it out from another angle. It’s layers and waves of understanding, communicating, and figuring out.

So, you could almost translate the title to be Let’s Make The Subconscious Conscious. Which, goddammit—that’s a million times better isn’t it? Is it too late to change the title?

You’re writing a book about Van Morrison. Can you tell us a little bit about that? How does the book-writing process compare to album-writing?

The book has a bunch to do with Van Morrison, but to say it’s a book just about him would be misleading. It’s about one year, 1968, in the city I live in, Boston, MA. Basically, I’m trying to reconstruct the culture that dominated an entire year in a city, half a century ago. This is all in an attempt to try and understand Astral Weeks and the present moment. If that doesn’t make sense, it will when the book is done. I’ve been interviewing dozens and dozens and dozens of people. It’s fascinating. But, as I started the book, a writer from the UK, M. Jonathan Lee, came over to the US to write a book about our band making this record. It was very hall-of-mirrors—dizzying and surreal. It all happened at once.

This is your fifth album. How much do you think of continuity or progression across your discography? Do you ever think about how a new record fits with your back catalogue? Or do you simply try to top the last one each time?

It’s our fifth LP, but there’s a b-sides collection and an EP too. It’s all part of the Hills-a-verse. I don’t try and top the last one, but I do try and react to the last one and figure out a way to not make the same record again. And the band, who definitely do not get as much credit as they deserve, ensures we don’t do that, because they’re such smart, interesting guys and musicians. They really know how to throw the bullshit I bring in out the window. Brian, who started out as the trumpet player on the first record, only plays synth on this record. This is the first HTH album without trumpet. That’s a huge change for us.

What is life like as a 21st century musician? Do you sit up at night refreshing the page to see where you rank in the sales on Bandcamp?

Waiting for immediate feedback is a sad trap. Having someone write a book about us making this record was a great reminder that we’re not making this album just to see what people say about it the first week it’s out. We’re making it so it lasts awhile. I do write about what I see as the dangers of 21st century music delivery systems, though. I just try and reserve those moments for when I really have something to say.

Do you feel pressure to cultivate some sort of ‘brand’ online? Your twitter activities with @JahHills are a cut above the usual band jumble of tour dates and recording photos. Is your goal to be funny and entertaining, or are your social media channels a careful part of the ‘being-a-modern-band’ package? Was the infamous Gorbachev/Twin Peaks incident all about shifting units? Are you only holding Taco Bell to rights to increase your own reach?

I get a terrible feeling when I tweet reviews or links to purchase the music, because I enjoy using Twitter as a creative outlet tool so much. But I also want people to hear our music! The adventures with Gorbachev and Taco Bell aren’t secret ads for our albums—they’re just me being myself online.

As far as being ‘a brand,’ all that means is creating a personality that’s cultivated to trick people into buying your product. So that’s definitely not me or us. Wait a second, though—what if we redid the vocals to this album, and sold all of the lyrical real estate to corporations, and called it A Brand Is Something To Figure Out? Like, all of a sudden track one I’m singing about Doritos and stuff? That might earn us some real money. Who do I talk to in order to make this happen?