“Our names are so similar. Where is your family from?”

That’s Mary Timony, guitarist and leader of D.C. power trio Ex Hex, whose musical career stretches back nearly 30 years. She’s on the phone with me, Mariana Timony, to talk about her band’s latest record, the radiant It’s Real. And I’m about to make a really cringey confession.

When I was 17 years old, I dreamed of being a music journalist, but I’d done nothing to make that dream a reality, other than being utterly and obsessively in love with music. And at that age, in the spring of 2000, there was no record I loved more obsessively than Mountains, Timony’s first post-Helium solo record.

A quietly devastating record of melancholy melodies and weird arrangements that’s closer to prog than indie rock, Mountains stands alone in Timony’s discography for its raw expressions of pain and its bleak imagery—the image of rising mountains a metaphor for the isolation of depression. Timony had dabbled with taboo subject matter in Helium, but her music was never as objectively sad as it was on Mountains.

I was captivated by the record. Mountains connected with me on such an instinctual level—that magical moment where it feels like music chooses the listener rather than the other way around—that it became, and remains, a part of my soul. I was so fixated on Mountains in a pre-social media teen girl way—doodling lyrics in school books and on my sneakers—that a friend of mine offhandedly referred to me as “Mariana Timony,” in lieu of using my actual last name. Needless to say, it stuck. Without thinking ahead, I began using the name—first casually, then professionally—and then it just sort of became who I was, all the time. Because Mary Timony’s music had more or less been relegated to well-regarded obscurity by the time I began writing about music, the meaning behind my use of “Timony” became like a secret tribute that I would never need to explain to anyone, because it sounded real. And anyway, don’t all good punks change their names?

All of which brings us to the present day, when I’m in the awkward position of having to explain all of that to Mary Timony herself. Heart in throat, I nervously give her the backstory while trying my hardest to not sound like a creepy fangirl, and then brace myself for an uneasy silence that never comes.

“That’s amazing! You took the Timony, which is cute. Thanks! Wow,” Mary Timony exclaims over the phone, sounding delighted instead of weirded out. “I love it!”

The ice officially broken, I tell her how much love I have for Mountains and its similarly mournful follow-up, The Golden Dove—how meaningful her music has been to me, and how insane it feels telling all of this to her, my idol for my entire adult life.

“I always feel lucky when I meet people who relate to those records, because they’re really dark and weird,” she says, laughing. “They’re not for everybody. I think last year I listened to them and was like, ‘Oh my God! I can’t believe I bared my soul. So embarrassing!’

But Timony is not the same artist she was 20 years ago, and the music she makes with Ex Hex is anything but “dark and weird.” The band debuted in 2014 with Rips, a powerhouse rock record that did exactly what the title promised. Gone were the fantastical flourishes and forlorn tones of Timony’s solo work, replaced by guitar-driven power pop songs that were unabashedly hooky and stripped-back, striking a balance between tough punk pluck and New Wave gloss. Rounded out by Betsy Wright on bass and Laura Harris on drums, Ex Hex had a cool-girl swagger about them that was well-earned: here was Mary Timony, a perpetually underrated—and oftentimes outright ignored—guitarist, shedding her artier impulses and taking the opportunity to just rock out. She sounded happier, too, and the ebullient quality of Ex Hex’s music reflected an inner shift in Timony’s creative process.

“I thought [Ex Hex] would be a fun project to do, because when I turned 40, I wasn’t interested in making music from the sad place,” Timony explains. “Now, it’s fun to have this band where we try to make these pop songs and have it be music that we really enjoy playing. It’s just a completely different way of approaching music.”

The result is a record that sounds like it could be blasting out of a Camaro in a suburban shopping mall parking lot in 1985: the drums are booming, the solos are rowdy, and the choruses are arena-ready. It’s a brave musical choice for the band, directly referencing the musical tropes of one of the more-derided eras of rock music, in an era when rock music itself is sort of derided. It works because Ex Hex instinctively understand that, for the kind of fist-pumping, anthemic rock music they’re collaging on It’s Real, corniness and elation go hand-in-hand.

“We were just going for this idea of, ‘Music that you thought was bad, but then you realize that you really love it,’” she says. “We’re trying not to cross the line too much, but just stay on the border of referencing stuff that’s slightly cheesy, but that’s why it’s appealing.” Growing up a punk rocker in Washington D.C, Timony admits that she “missed metal” the first time around. “Everybody I knew was either a punk, or they were into go-go, or they were a preppy. I was always kind of fascinated by kids that were into metal, but I knew they lived in the suburbs.” 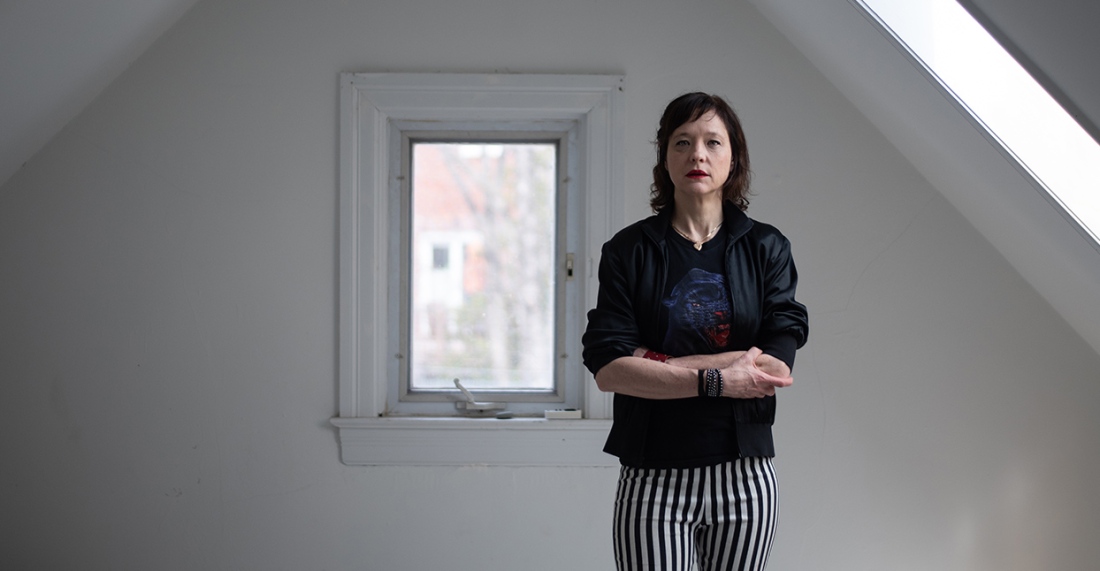 Ex Hex’s self-aware embrace of ’80s metal’s inherent cheesiness and bigger-is-better mentality gave Timony a chance to apply her guitar skills to a more basic form of rock music: one that draws its power from showmanship rather than technical skill. She’s more than up for the challenge; It’s Real features some of the most limber, self-assured guitar work of Timony’s career. Whether noodling chirpily on the outro to “Good Times,” bouncing on block chords on the propulsive “Diamond Drive,” or erupting into a driving psychedelic lead on garage number “Cosmic Cave,” Timony is perfectly capable of coloring within genre lines. But even when she’s playing it straight, her offbeat instincts—the bent note here, the quirky prog scale there—remain a distinctive part of her musical vocabulary.

But there’s an expansiveness to her soloing on It’s Real that’s new—less emphasis on spidery melodic passages, more on sustained, ringing guitar leads that sound huge and powerful over Harris and Wright’s rock solid rhythm section.

Timony credits Wright, who contributed several songs to It’s Real (including rainbow-hued highlight “Radiate” and the thunderous “Another Dimension”) with balancing out her more oddball inclinations with her talent for big pop hooks.

“I didn’t even know when I started playing with Betsy that she’s this incredible songwriter,” says Timony. “She writes pop songs really easily. I’ve never been able to do that, so it’s cool to work with her on songwriting. Hooks come to her super-fast. I feel really lucky to have made that connection with her.” 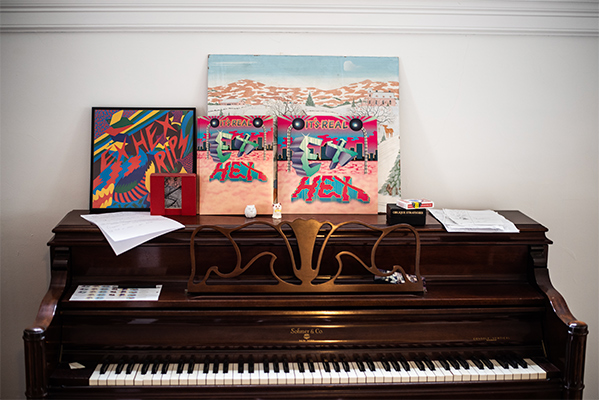 It’s hard not to read Ex Hex, and the musical choices on It’s Real, as a telling sea change for an artist whose discography previously dealt so heavily with discomfort, both lyrically and musically. Where her music was once so personal that it was almost impenetrable without dedicated, empathetic listening, her songwriting on It’s Real delivers bold immediacy via stylized simplicity. This appreciation of a “back-to-basics” approach partially came about during Timony’s time in short-lived indie supergroup Wild Flag, when she had to simplify her song structures before bringing them to the group for deconstruction.

“The way we wrote songs in that band kind of influenced me,” she says. “Suddenly I was like, ‘Hey I want to just approach this from a craft standpoint and not a diary entry standpoint.’ To be honest, it’s way harder for me to write simple songs than it is ones that come from my heart. It’s a lot harder to make stuff that I feel is simple and good. The other stuff just comes out—it’s like dreaming or something. Making a pop song is more of a craft.”

It’s an altogether new approach for an artist whose musical career choices “were based on songwriting and being creative,” rather than making records with the goal of acquiring new fans and filling venues. “It served its purpose for me, but obviously that’s not a sustainable way to be in a band.”

“The ’90s were definitely different,” she continues. “I wasn’t trying to do anything that anyone would like. It was fine with me if it stayed in a small underground arena. I wasn’t really concerned with, ‘Do people like this?’ It was more like, ‘Here’s what I think.’” Now, Timony says, she’s focused on, “getting songs that are fun for us to play, and that feel like they play themselves.”

The word “fun” pops up again and again in our conversation, and it’s both an appropriate descriptor for Ex Hex, and a novel way to describe Timony’s music. “There’s a storm in the distance, but now it’s rolling on/ And good times will be here before long,” she proclaims on It’s Real’s opener “Tough Enough,” a song about facing down life’s peaks and valleys with determination—a much sunnier outlook from a woman who once called herself, “the girl with the feather heart that the birds came down and pecked apart” on Mountains’ “Rider on the Stormy Sea.” After releasing albums that were fraught with despair, and experiencing a career low point that culminated with her having “a moment” while sleeping next to a cat’s litter box on tour—a bleak scenario that led her to quit making music for years—there’s a satisfying sense of justice in seeing Timony in a band that embodies the exhilaration of great rock music. At its least cynical, rock & roll is fueled by the pursuit of fun, and the steadfast belief in the ability of a communal experience to lift even the heaviest of hearts. 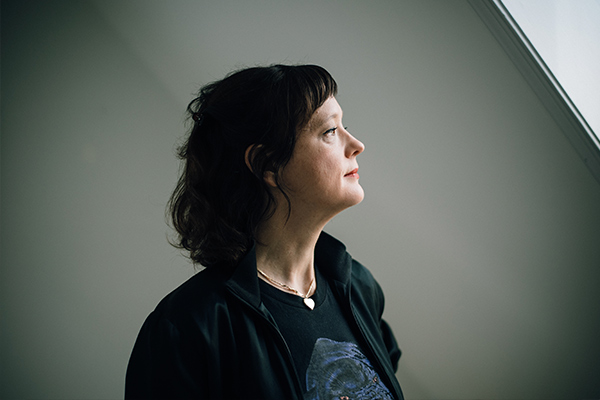 As my conversation with Mary Timony comes to a close, it occurs to me both how strange and yet how appropriate it feels for me to be interviewing my teen idol about It’s Real, specifically. One of the things that’s gratifying about having a favorite artist, whose career you follow over the course of decades, is that tracing their emotional journey can help you plot your own. While there’s so much I could tell Mary about how her gloomiest records comforted me during my sad teens and directionless 20s, all I’m really thinking about is how good it is to hear her sound happy, and how Ex Hex feels like a musical reflection of the way life’s seemingly-endless sorrows can sometimes resolve themselves once you get out of your own lonely brain. I’m thinking about how a love for music is like faith, in a way—the light in the darkness of so many lives.

But isn’t that what this kind of music—hard, loud, fast, jubilant rock; rock that revels in all of its over-the-top glory—is all about? It’s Real is powerful because it’s a celebration of the unique power of popular music to burst from the stereo and create authentic connections so meaningful that they might lead a 17-year-old-girl to change her name—and, in a way, her life—because she loves music so damn much. Cheesy? Sure. But in a world that’s infected by cynicism and addicted to irony, an abiding faith in the power of rock and roll might be the realest thing of all.