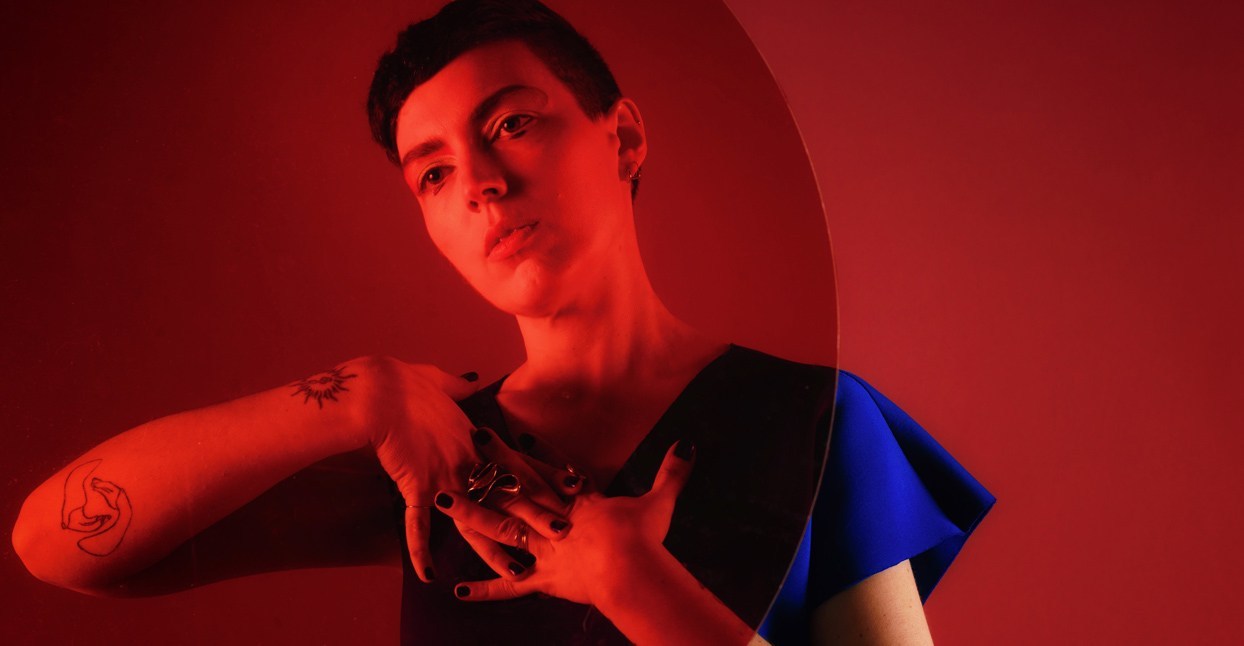 “If I’m living in these gray areas, then I can kind of do whatever,” says composer Sofia Hultquist. For some time, she’s felt as though her music exists beyond genre boundaries—neither ambient nor electronic. And while she may have been bogged down by those definitions—and her own expectations—in the past, her latest release as Drum & Lace, semi songs, is about both recognizing and following her intuition.

Semi songs is a multimedia experience: The music is complemented by a physical composition book and live staging in L.A. featuring an orchestra, dancers, and interactive lighting. (It’s Hultquist’s hope that the live show will eventually travel.)

When she’s not busy making music as Drum & Lace, Hultquist works as a sound composer, scoring a multitude of projects—everything from fashion films to the upcoming Apple TV show Dickinson. On previous Drum & Lace recordings, she used layering and distorted vocals to disguise herself as much as possible; on semi songs, her feelings are laid bare. Brought to life with a small chamber group of violinists and cellists, which accompany her piano playing and subtle electronic flourishes, the EP is both a departure from her previous work, and a bold ascent into new territory. “Of course I’m terrified that things are going to just tank,” she says. “But at the same time, this is actually the most personal music I’ve ever written. So it’s just one of those things where it’s like—[even] if nobody else likes it, I just felt I had to do it.” When Hultquist first began writing the EP, she was convinced no one would understand what she was trying to accomplish; instead the feedback from friends and family has proven the opposite. “It’s more relatable than I thought,” she says.

The track “Gardenia” was the origin point for the EP. The song was originally created after the Los Angeles arts collective Echo Society invited Hultquist to participate in a concert built around the theme of family. Hultquist admits she initially procrastinated, in large part out of fear over what she might end up confronting. “It was either going to be what it wound up being, or it was going to be an angry thing [directed] towards the rest of my family,” she says. Far from anger, semi songs is instead an opus that explores love and loss throughout its 16-minute run time, centering on the image of her mother tending to her flower beds. “I had a very complicated relationship with my mother—and just a very emotionally complicated childhood [in general]—and gardenias are flowers that she had and took care of. She passed away when I was 18, so it was kind of like this ode to her.”

The violin and cello from the EP’s beginning return on closer “Outsider Complex Part 2,” but the mood shifts. “The hope is that as you listen through the record, the ending is going to sound more triumphant,” explains Hultquist. Indeed it does, the sense of tension transitioning into anticipation. Hultquist envisions the final song as a kind of “call and response” to the album’s beginning, a mirror of her own mood when sadness comes to visit. “You just get so, so, so sad that by the end of it, it’s like you’re crying but then you’re like laughing. You’re like, ‘Wait a minute,’ you know? It’s that realization of being kind of like, ‘Wait, there’s life beyond this,’” she says. “Parhelion” illustrates that progression. A repeated piano phrase in the middle of the song sounds both stunted and jubilant at the same time. The song slowly builds to a soaring closing, replacing the feeling of paralysis with a clear sense of triumph. For Hultquist, the track is rooted in the ideas of discovery and courage.

On semi songs, Hultquist focuses on holding herself accountable not only to following her intuition, but also to stick with those impulses until the project at hand is completed. “This, more than anything, is just something that I feel I just needed to get out,” she says. “Again, [I hope] that people will like it and it will resonate with them. But even if it does really poorly, I just felt like I had to just get it out. It’s not written to be on any sort of [sales] charts. It’s written for my own well-being.”