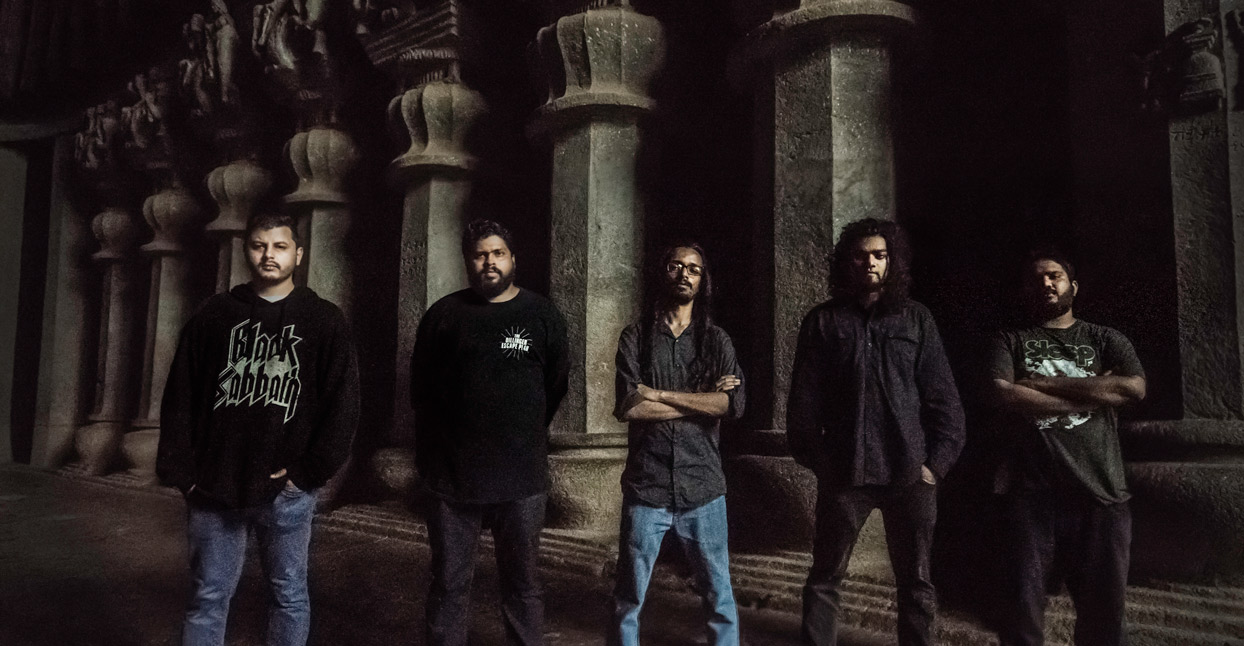 Since at least Iron Maiden’s 1982 classic “Run to the Hills,” metal has had an ongoing lyrical preoccupation with the indigenous peoples of the Americas and their exploitation by colonizing forces. Anthrax famously bemoaned conditions on reservations on “Indians,” and artists like the Lenape duo Nechochwen and the bands of California’s Black Twilight Circle call on their indigenous Mexican heritage for lyrical inspiration. There’s plenty of commonality between the exploitation of the Americas and the colonization of the Indian subcontinent, which the young sludge band Dirge call home. On their audacious debut album, Ah Puch, the Mumbai-based outfit manage to draw a line between the two in a profound yet subtle way. It’s heavy as hell, but it’s never heavy-handed.

Ah Puch is nothing if not conceptually ambitious, especially for a first record. The LP is set on the Yucatan peninsula during the 16th century Spanish conquest. The lyrics reimagine the showdown between the invading Hernán Cortes and the Aztec king Montezuma, whose body has become the vessel of a reincarnated Mayan god. More than a piece of mythological fan fiction, Ah Puch is a meditation on the cycles of violence and brutality that echo through the centuries, cycles we still haven’t escaped.

“The Aztec belief of the cycle of blood and roses, in which the shedding of blood granted the Aztecs favors from their gods, [is] a very apt metaphor for the reality of the world today,” explains Harshad Bhagwat, Dirge’s bassist and principal songwriter. “People are still sacrificed, figuratively, for personal gains.”

The band didn’t enter the studio with preconceived designs on writing an album about the Aztecs or weaving a complex metaphor about humanity’s affinity for greed and self-destruction. The riffs came first, and the subject matter followed naturally.

“The concept of the album was derived as an interpretation of the music,” Bhagwat says. “We composed the riffs of our first song ‘Invoking the Demigod’ without setting any creative constraints for ourselves. On listening to the recordings from the jam room, we brainstormed a conceptual outline of ‘reincarnation of ancient gods’ for the songs.”

The resultant material became the perfect vessel for the album’s heady concept. The five non-interlude tracks on Ah Puch are pummeling, nasty behemoths, each one crossing the nine-minute mark. They fuse menacing low-end to relentless riffs and bile-coated vocals. It’s classic sludge, in other words—yet it’s also preternaturally agile, with shifting tempos and textures, a positive harbinger for a new band in a crowded subgenre.

The aforementioned “Invoking the Demigod” opens the album with a minute and a half of atmospheric feedback before settling into a forward march of mid-paced riffage that patiently stalks the listener for the next 10 minutes. Second track “Montezuma’s Revenge” immediately flips the script, leading with a nearly thrash-speed riff that showcases the band’s dexterity. There are shifts like this throughout the album, some subtly woven within songs, like the moment in “Corpse of Cortez” that finds the band sneaking in a gorgeous, clean interlude before concluding the album with a punishing knuckle-dragger of a riff. Crucially, Ah Puch also sounds great.

The album was recorded in Mumbai by Apurv Agrawal, but it was brought to life by a couple of American heavy hitters in mixer Sanford Parker and mastering engineer Brad Boatright, whose production résumés include a huge cache of acclaimed metal bands, including Dirge forerunners like Rwake and Coffinworm. Their steady hands helped turn an album that could have been merely precocious into the truly accomplished work that it is.

“We’ve always been huge admirers of [Parker and Boatright’s] craft, as they’ve worked with some of the bands we really look up to for inspiration,” guitarist Ashish Dharkar says. “They know this sound extremely well, and since the time we started with the pre-production process of this album, we knew we had to contact them for producing this record. They’ve brought a whole new level of professionalism to our sound.”

Parker and Boatright’s involvement should also help ensure that Ah Puch finds a wide audience outside of India. That’s a significant triumph for a young band from a growing scene that remains largely unexplored by fans outside of the region. The Indian doom scene, in particular, is growing, with Dirge sharing bills in recent months with kindred spirits like Primitiv, Shepherd, Djinn, and Miskatonic.

“There’s more original music coming out of the country now than ever before,” guitarist Varun Patil says of the state of metal in India. “It’s been pretty good this year in terms of bands touring and releasing records more frequently, but there’s still a long way to go when it comes to the recognition that this genre deserves.”

Ah Puch seems poised to help the Indian metal scene make that leap to international recognition. You can hear the passion that oozes out of every note, and the execution measures up to the sky-high ambition of the concept.

“This genre being so close to our heart, it has pushed all of us to keep at it and be more serious about playing this style of music,” Patil says. That seriousness has manifested in one of the most impressive sludge debuts in recent memory, and if there’s any justice, Dirge’s hard work will place them and their peers in the Indian metal scene under a much-deserved spotlight.