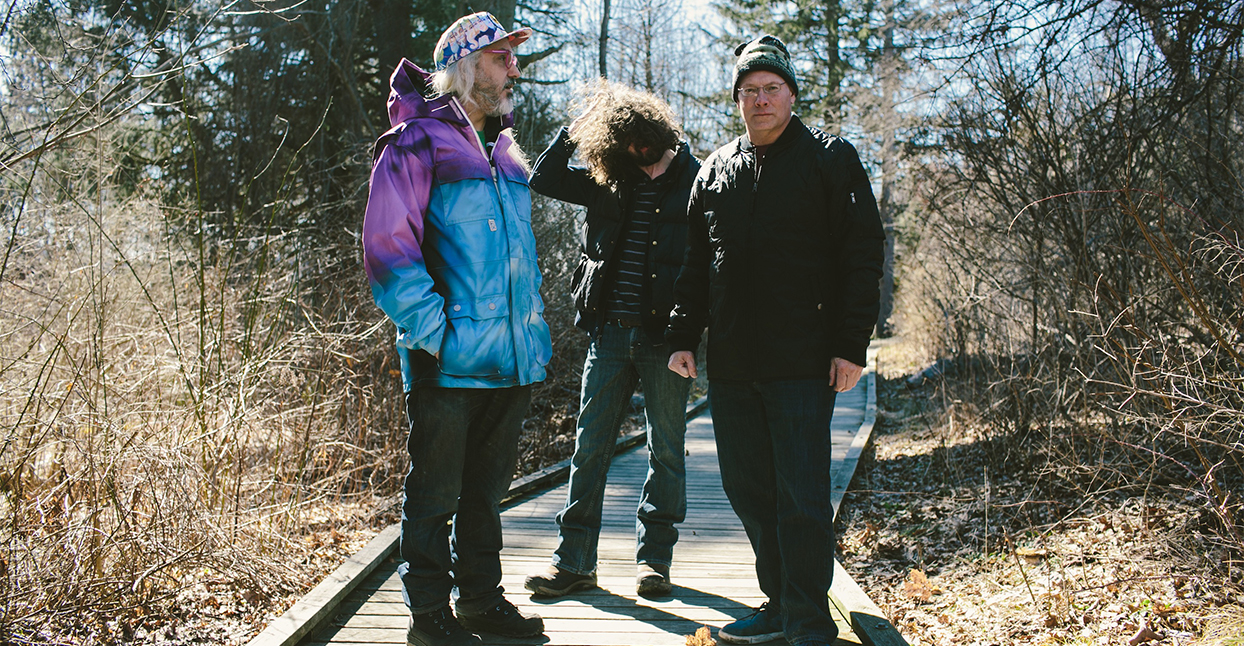 In the world of band reunions, acrimony and in-fighting are often repressed in favor of large festival paychecks and a smattering of lucrative show dates. At best, high-profile reunions of the “classic” lineups are serviceable (The Jesus and Mary Chain) and at worst, disastrous, tarnishing a band’s legacy (Kim Deal made the right call sitting out the latest Pixies reunion). Rarely are these reunions fruitful, and even less often do they result in a band’s second or third life, releasing new music that feels relevant and rejuvenated. Perhaps unexpectedly, ear-bleeding classic alt-rock favorites Dinosaur Jr. are in the latter category.

The creative fire-and-ice of the trio are lead singer/guitarist J. Mascis and bassist/songwriter Lou Barlow, two strong-willed personalities whose temperaments caused the band to implode after only three records, 1985’s self-titled debut, and the landmarks You’re Living All Over Me and Bug in 1987 and 1988 respectively. Like a messy, drawn-out divorce, the original trio, including drummer Emmett “Murph” Murphy (who quit after 1993’s Where You Been, which was essentially a Mascis solo record with guests) seemed destined for indie rock lore and “You shoulda been there” anecdotes. Then, the trio reunited for one of the greatest comeback records ever released, 2007’s Beyond. Dinosaur Jr. combined the best of what they’d learned during the hiatus (Mascis’ folk-leanings and Barlow’s somber lo-fi arrangements) into one of their most satisfying outings—a blast of big, wall-of-noise sound that contained as much songwriting nuance as it did gain. The band hasn’t looked back since, continuing to release consistently solid records, despite a chill that still exists between Mascis and Barlow. The trio, like world-weary lovers in constant therapy, are making it work. I spoke to Barlow and Murph before the release of the band’s latest, Give a Glimpse of What Yer Not.

Is Dinosaur Jr. more of a democracy now? Is that what’s made the reunion stick and work continue to evolve?

Barlow: No. [Laughs] At the heart of the band is J. [Mascis], and he has a vision. He writes 80% of the songs, at least. The longer that we’re together, the cool thing that I’ve realized is that the vision is not an inflexible thing. I have an amount of freedom when we sit down and put the songs together. I more or less write my own bass parts, but if something doesn’t work on a song of his, I’ve gotta change it. Having been in bands that are democracies, I find having J. as a leader a great relief. Over the years since the reunion, there’s been times when I’ve needled. ‘Do I have to do this? What are we doing this for?’ I’ve questioned things along the way, but in the end, I get answers. It’s not a democracy, but it works.

Did Give a Glimpse of What Yer Not start off like any other Dinosaur Jr. record? Does J. come to you guys and say, “I’ve got a batch of songs. Let’s do something?”

Murph: That’s how it normally goes, but for this record, J. was kinda freaking out. We didn’t have any songs and we had the date set to try and record. We really were like, ‘What are we gonna do?’ J. had an old Witch tune that we started reworking and that got us going. Once we started working on that, the floodgates opened. J. works better under pressure, and once the light switch turned on, he just started churning out all this crazy, great material. Lou and I would be learning or tracking in one room, and J. was literally recording demos in the next. It was like a conveyor belt. Something would come in and get turned around immediately. It was pretty crazy. We do drums first. That’s always the main focus because everything gets layered on that. That took about a month, and the next six weeks was layering and mixing guitars, vocals and bass.

Why was there such an immediate rush to get the record done?

Murph: I think it was because we hadn’t done anything in a few years. If you snooze, you lose. We want to keep going and put new product out there. We could have toured some of the old material. We could have done Farm, as we didn’t really tour that record very much. We could have pulled something out of the hat, but J.’s not really into doing that. He likes to keep things fresh.

What makes the new record particularly resonate with you?

Murph: I’m really noticing J.’s vocals. He’s starting to add some real harmonies and his songwriting and technique is more refined. This record is a little poppier. I hear a lot more radio-friendly stuff and I don’t see that as a bad thing. People might say, ‘Oh, you guys are selling out.’ Nothing is ever intentional. J. doesn’t sit down and say, ‘I need more pop songs.’ It just comes out the way it comes out, and the three of us interpret it. It gets tossed into the pile of songs, and that’s it. I was really surprised, because when I’m doing drums, I’m not hearing the lyrics or the finished product. I usually leave and come back a month later and there’s all this stuff going on, and I’m like, ‘Now the song has taken shape.’ From the basic tracks, I don’t get a sense of the song exactly or how the record is going to sound. I feel this is one of our strongest records to date.

Give a Glimpse of What Yer Not was being recorded during the shows for the 30th Anniversary of the Dinosaur Jr. debut album. Are you sick of nostalgia, and certain fans committed to a specific time period?

Barlow: I find nostalgia tiresome, but I say that just from my own point of view. If I have to go through another Guided By Voices reunion tour…[Laughs] As a music fan, I think it’s a little overplayed. Bands are always celebrating themselves. To me, it doesn’t matter so much. At the same time, it’s nice. I benefit from it. Playing a week of shows of songs from the first record, I’m not a crank about it. I get to see people I haven’t seen in years. It’s a huge ego and energy boost for us. We take a lot of energy from our audience. That kind of appreciation fortifies us. It means a lot, and I say that with absolute honesty. It fortifies us in a way that could never have happened when we were a band early on. What I really like about this reunion, and what surprised me about J., was the fact that he did pursue this as a real band again. He stepped in, wrote a bunch of new songs, and decided that we were gonna do this. It’s a testament to J.’s love of music and that’s something I can really get behind.

Do you and J. get along as friends, or is music the tie that binds? Do you make each other laugh?

Barlow: J. makes me laugh. He’s incredibly dry and has a pretty harsh sense of humor that I enjoy. But we’re not chatting. I don’t really have friends in general. I never have. I didn’t go to college and didn’t have friends in high school. I live a very domestic life. My family is the epicenter of my life. Literally everything I do is either write songs and play music, or I’m immersed in my domestic life. I don’t think I’ve ever said, ‘Hey, I’m gonna go out tonight and hang out with the guys!’ Music is the glue for my relationship with J. and 90% of the male friends I’ve ever had.

Murph, do you act as mediator or peacemaker in the band? Do you still have to put out J. vs. Lou fires?

Murph: I definitely still do. It’s so funny, because J. and Lou still rarely talk to each other. Once in a blue moon they’ll send an email, but if we’re going to practice or get together, I’m always the go-between. J. will text me asking, ‘Do you want to see if Lou will do this?’ He rarely will text Lou and vice versa. I’m happy to do it, and basically I have accepted that as my role. It’s funny, because when I’m in the middle of it, it seems deadly serious. Looking back, I’m like, ‘That’s a total Spinal Tap moment.’

Barlow: No, it never did. J. never smoked, at least when I was around. There might have been a middle period where he smoked, but I don’t know. When it comes down to recording, it’s pretty no-nonsense. We get right to the point. When we were young, Murph was one of my first friends that smoked pot. I think I’m the only person in the band that has an ongoing, on-and-off relationship with marijuana.

Murph: I definitely went through a period where I crashed and burned pretty hard. Lou has his newborn. J. has always been the punk rock guru. Have you heard of the Hugging Lady? J will go see her, and sometimes I’ll tag along. It’s these gatherings of Indian food, music and spirituality. It’s a cool vibe. J does that, so it all just came together, as far as us just being healthier at this point. Physically and mentally, I had to stop partying if I was going to keep doing this. I got to a point where I had to choose one or the other. I’ve noticed that with younger bands, the days of being trashed backstage and being crazy is pretty rare. You don’t really see it anymore. Younger bands today are super serious and into honing their craft. I’ve definitely noticed a difference, compared to the “80s and ‘90s. Here on the East Coast, we have the whole opiate problem and everything has gotten so extreme. There’s no in-between anymore. People are either super serious or on their own, crashing and burning.

If you were a teenager today, would you still want to get involved in the music game? Is it too turbulent and volatile?

Barlow: Of course I would. I’d probably be neck-deep in Bandcamp, finding the craziest bands that I could find. I’d be emailing them and would be totally into that. I would be doing what I did back then, which was getting my hands dirty finding music that speaks to me. Teenagers are totally still finding their own scenes and bands.

You posted on Facebook about listening to the song “Iris” by the Goo Goo Dolls, following the birth of your child, and having an awakening.

Barlow: I think I was saying that I had always appreciated it, but was never able to be honest and say, ‘I love that song.’ I consider myself a really open-minded person who doesn’t have ‘guilty favorites.’ Why should I ever feel guilty for liking something? But when it comes to that song, every time that it comes on and I feel so wrapped up in it. I’ve always felt kind of guilty for loving it as much as I do.

What Dinosaur Jr. songs have really stuck with you through the years? What do you never get tired of playing?

Murph: ‘In a Jar.’ Believe it or not, we still cover ‘Just Like Heaven,’ and that’s always really fun. We’ll do that as an encore, and I don’t know why, but I never get tired of that.