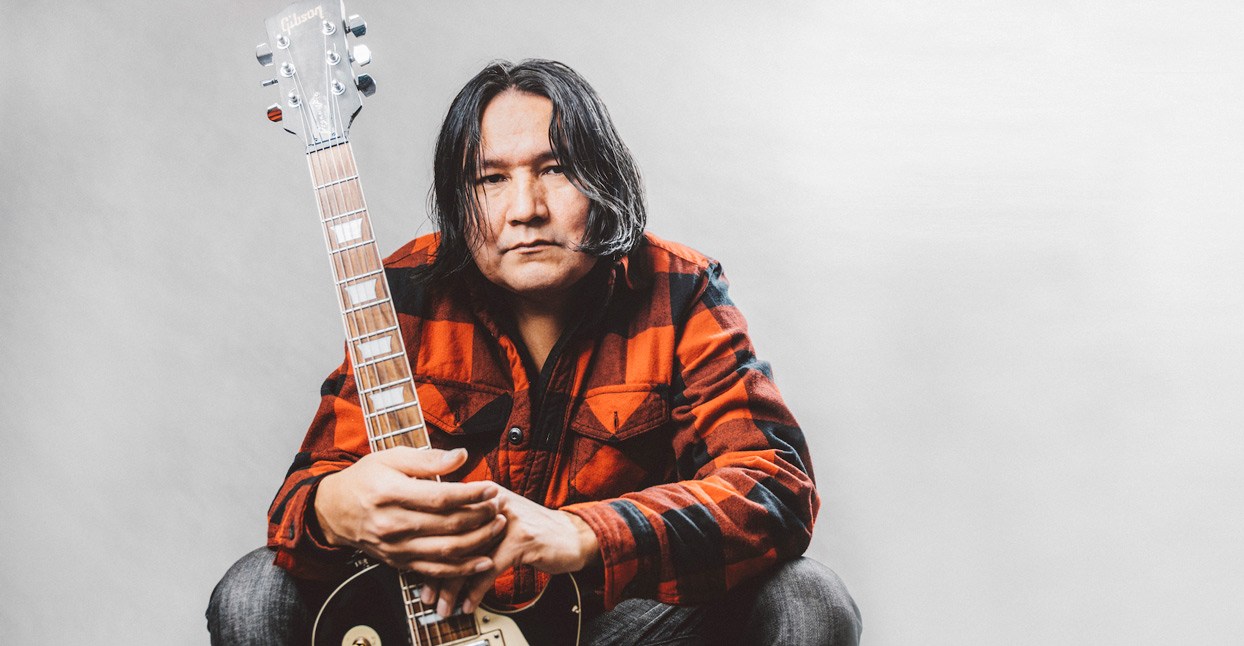 Yellowknife is the only bona fide city in Canada’s Northwest Territories; it counts around 20,000 residents—nearly half the territory’s population. A hundred kilometers north, on the upper reaches of Great Slave Lake, resides a community of about 2,000 called Behchoko, which is the capital of the Tlicho nation. These two locales, and all the places in between, are the home and beloved stomping grounds for Diga, guitarist and singer of Yellowknife-based rock outfit Digawolf.

Diga’s affection for and connection to these lands are the beating heart of his new record, Yellowstone. The record comprises 10 tracks sung in both English and the Tlicho language, a lion’s share of which detail Diga’s affinity for the north. The thick garage rock strut of opener “By The Water” establishes the record on Tlicho lands, while the relaxed, trumpet-laden slow burn of “Northern Love Affair” is a love letter to the territory: “It’s cold but I don’t care / It’s a northern love affair,” he croons in a gentle tone that plays Hyde to the bloodied, throttled-roar Jekyll that fills much of the record. Under pulsing, distorted squeals and interference, closer “The Undiscovered World” imagines the region in a time before the settlers—and for that matter, humanity itself—arrived.

Yellowstone was recorded in Denmark with Greenlandic producer Jan de Vroede and a trio of Danish musicians, plus harmonica and trumpet work from the late Ralph Carney, who was a saxophonist for Tom Waits. It’s a record that captures the harshness, magic, and romance of the north, but it also disrupts it with dissonant flourishes, inexplicable glitches, and imaginative tales of UFOs. Some of it is metaphor, some of it is rooted in reality. It all melds together to paint a picture of a land in transit, shaped by and independent of modernity, both resistant and already surrendered.

Music wasn’t the Tlicho musician’s first love. “I was pretty determined to become an artist, a painter,” Diga says. “I have five older brothers, and they all play music. I didn’t want anything to do with guitars or music, because that’s all they did,” he laughs. Diga’s songs originate as poems, which are eventually chopped and spliced to match music that is created spontaneously—he notes that the tracks on Yellowstone were recorded live off the floor, sans click track.

“Digital Nomad” is a throbbing slab of motorik post-punk blues that finds Diga wrestling with the decision to move to the city, and an elder in his community scolding him for his departure: “My elder looked at me and said, ‘What’s wrong with you?’” he growls over and over on the track. “It’s just a poem that I wrote a while back about some of the things that I was seeing within myself,” Diga says with a knowing grin. “I think I needed a slap. Somebody had to put me in my place. Sometimes a young person has an idea of how the world works and how things are going, and sometimes it takes an elder to say, ‘No.’”

Diga grew up speaking Tlicho, a language spoken by fewer than 2,500 people—a statistic that qualifies it as an endangered language—and only learned to speak English at nine years old when he attended a school in southern Alberta. Even with the federal Indigenous Languages Act tabled, critics note that the Canadian government has failed to earmark impactful funding for the campaign. Despite singing in Tlicho, Diga doesn’t want to be platformed as an activist for language-revival efforts. “I’m not on a crusade to make sure that everybody understands Tlicho,” he says. “I don’t feel like I’m obligated to. Language is really important [and] I’m fortunate that I still have my language, [so] I use it.” He adds that outside pressure to perform in Tlicho can become wearisome. “You become like a circus [act]. ‘Perform now!’”

Whether in Yellowknife or Denmark, Behchoko or abroad, Diga has nothing to prove—and he carries the north, with all its grandeur and confidence, with him. “I don’t need to walk around the bush with my bare feet to feel connected to the land,” he says. “If you’re from a certain place, it’s just part of who you are.”