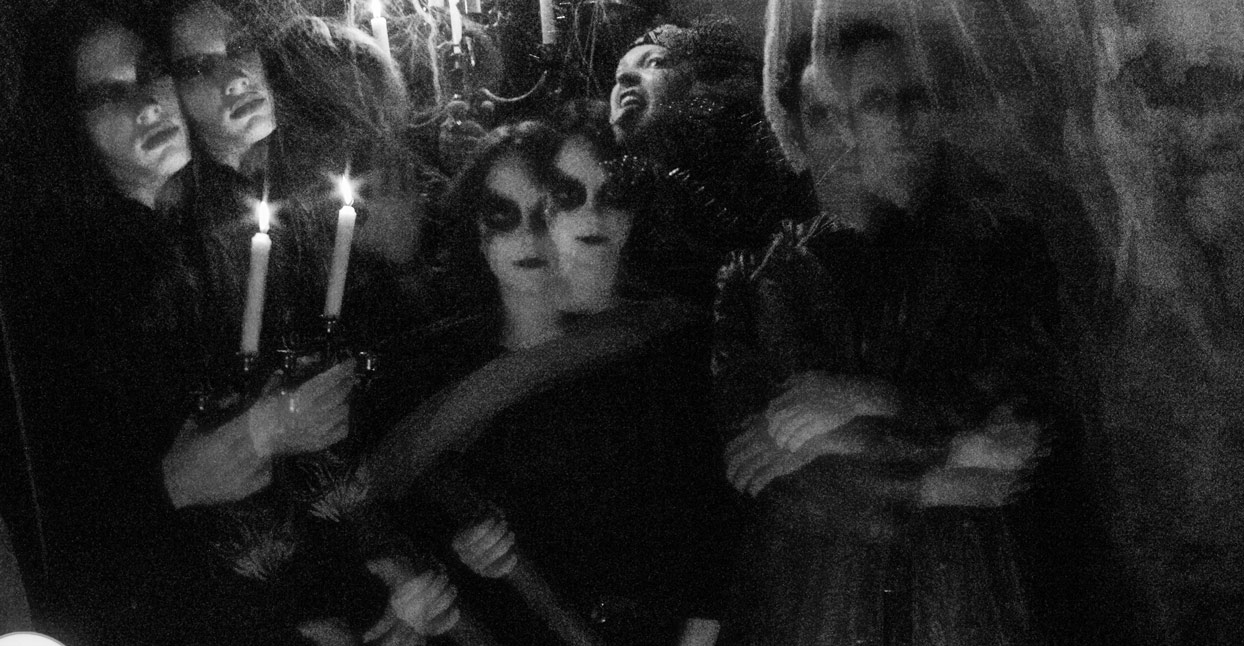 Folklore has it that there was a vampire called Abhartach that terrorized the Irish village of Glenullin long ago. Not only did Abhartach go around drinking people’s blood, but he would torture and abuse people, and do all kinds of other nasty stuff. Having enough of it, a villager named O’Kane ambushed Abhartach while he was out on his nightly prowl, jacked him up, and then drove a stake into his heart. In order to keep the beast out of commission, O’Kane dug a giant pit, threw Abhartach face down into it, filled the pit back up, and rolled a giant boulder on top. Being undead, Abhartach is still “alive,” albeit in stasis, forever scratching at his grave and screaming in rage.

And that’s where the story of Devil Master, one of Philly’s most exciting and darkest new punk bands, begins.

Hundreds of years later, a young Irish man named Francis O’Kane (a descendant of the legendary “vampire slayer” O’Kane) came romping along the hills of his great-great-great grandfather’s hometown. There, he stumbled upon the exact same boulder that was supposedly used to incapacitate Abhartach, and realized that this fearsome fiend was buried but meters below (today, Abhartach’s grave is referred to as Slaghtaverty Dolmen, aka The Giant’s Grave).

O’Kane—who had been an altar boy for most of his life before this point—made a decision right there and then. “I inverted my name from O’Kane to Kano, in allegiance to the vampire,” recalls Francis Kano, Devil Master’s guitarist. “I grew up Catholic and the priests were actually fine. But, I would ask them about Hell and Satan; they didn’t like that. They kept refusing to answer me, so I found that interesting. After asking and asking, eventually I turned against it.”

Influenced by Zouo, a Japanese hardcore band from the ‘80s who also enjoyed Satanic imagery, Devil Master combine hardcore punk, thrash, and death metal into a murky sound that is decidedly raw and pays tribute to evil forces. Pretty much every song is buried under a grimy bath of reverb and is about how cool a particular demon is.

Kano is speaking to me across the street from a metal fest in Philadelphia. That we’re standing on what is technically the police station’s portion of the sidewalk might explain why Kano seems to grow more gleeful with each sip of his beer, which he’s imbibing—on municipal property, no less—from a glass bottle stowed away in his vest.

Also present is Devil Master’s singer, a lanky slacker who simply goes by Max. In sharp contrast to Kano’s rakish disposition, Max has a laid-back, surfer dude persona; with his skinny frame and long blonde hair, he looks like Jay from the movie Clerks.

“Atheists are annoying, too,” Max adds, jumping into the conversation. “They bitch about Christians about being in-your-face, but they are the most in-your-face people there are!” Fuming, he proclaims in conclusion: “Do what you want to do!”

“Doing what you want” is one of the band’s core values. In the 2000s, both metal and punk subgenres each had a fairly rigid and specific set of rules that a band should subscribe to in order to be a “true” band of that genre. Devil Master don’t care about any of that. They take the murky distortion of black metal. They use the charging pulse of D-beat. There are even a few hair band style solos mashed in the cracks.

The band’s new compilation, Manifestations, which combines two of their EPs—Devil Master and Inhabit the Corpse—exhibits all of this. Meanwhile, they are putting the finishing touches on their debut album for Relapse Records, produced by Arthur Rizk, which finds the band doubling down on their dark musings.

In their music, Devil Master make it a point to dwell on the Satanic. “The Devil Master (Devil is Your Master)” is all about how Satan controls everything and the concept of “morality” is a farce. “Blood On My Shroud” nods back to Abhartach and uses the concept of the vampire to argue that “evil” doesn’t really exist.

These statements come from a personal place. Several of the band members, Kano included, are honest-to-badness theistic Satanists, although they lack ties to any particular community (or cult, for that matter).

“I think Satan is the force that pushes the Universe forward,” Kano explains. “It’s like God… Well, there is no ‘God,’ it’s just the name of a force. ‘Evil’ does not exist; morality is a social construct. If you look at ancient pagans, they didn’t have sins, just responses to actions. There’s no guilt, just a chain of reactions that you push forward with magic.”

“Every accomplishment is magic,” replies Kano. “If you put out a thought, you can make it happen. Synchronicity. I align with the force called Satan in order to make things happen.”

Max jumps back in to set the scene: “Yeah, so like, we’ll be driving along, and we’ll pass a beer store, and Francis will say, ‘Stop! I need a beer!’ And sure enough, we’ll turn around and he’ll have a beer!”

Whereas many of their Satan-espousing brethren can come across as dreadfully dour, Devil Master are a metal band in a constant state of revelry. As we talk, they’re downing beers. A few of their friends walk by and announce, “We’re going to do dabs in the car!” Kano and Max don’t opt to partake, but one wonders if that’s only because they are doing an interview at that exact moment.

Devil Master’s penchant for unwholesome tomfoolery carries over to their music. While their lyrics often dwell on damnation, the horror of the undead, and misery, they just as often celebrate these things as something “good.” Their live setup is similarly mischievous: at any given show, they’ll cover the stage with a giant spider web, which the audience will subsequently rip down with relish, so they might mosh around with fake cobwebs stuck to their skin; they’ll also smear thick corpse paint on their faces, so as to appear reverent and irreverent simultaneously.

If that all sounds like a spectacle, that’s because it is—nothing more, nothing less. “Our lyrics are not anything political,” Kano says simply. “We don’t do social commentary.” Rather, he explains, their interests lay in actual demons, like, say, the subject of their song “Sex with Succubus”: “We’re actually talking about a demon that you have sex with.”

The pair break out into schoolboy giggles. In a scene populated by grumps who dwell obsessively on pentagrams and Baphomets, Kano and Max are yukking it up like a pair of imps, and they’re loving every moment of it.

Kano says, “I’m very happy. I’m just here for this life, so why be miserable? I’m going to spit in the face of everyone that tries to get in my way. That’s Satanism to me, living the most fulfilling existence you can. I’m a very life-affirming Satanist.”