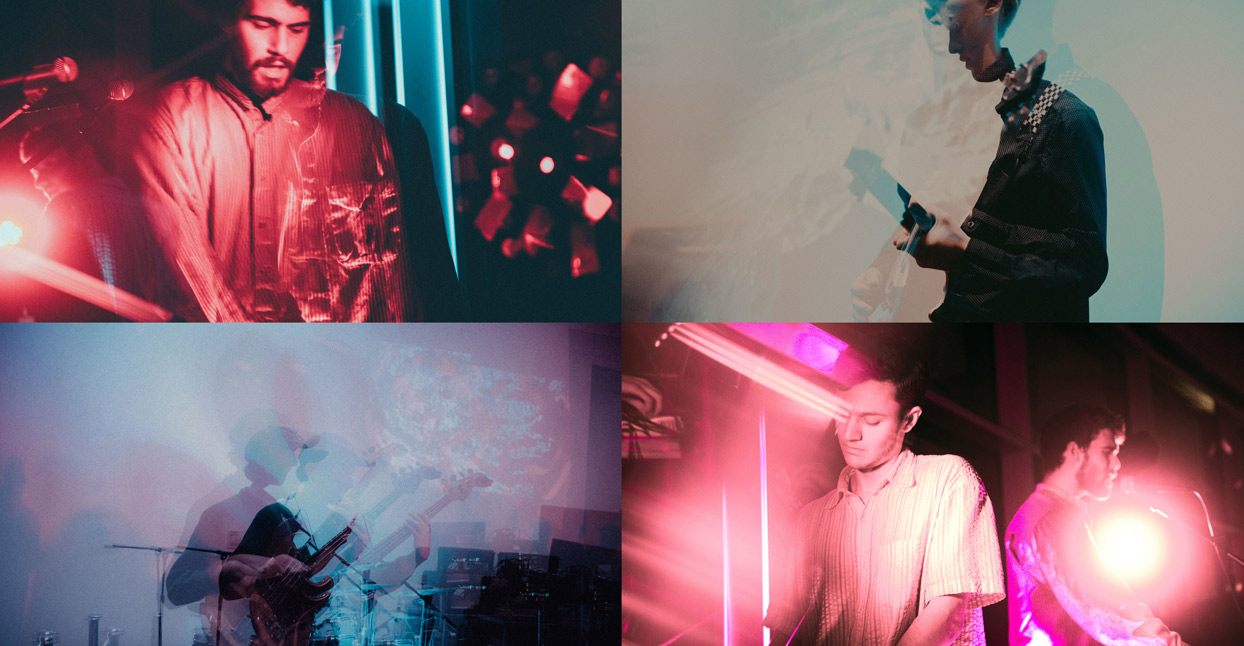 On Dawkins’ simply-titled debut EP, Ep1, the Washington, D.C. area group offers a handful of widescreen, pop-flecked productions that don’t slot easily into any single category. But while the five songs that make up the group’s first official outing may vary in exact structure, it is clear that each composition is part of the same whole.

Across the record’s five sonic collages, rippling electronics peek from behind finely-sculpted drum programming. Beds of pedal-processed guitar gradually turn and evolve beneath kaleidoscopic, reverb-drenched vocals. The result is something the group hesitantly refers to as “splatter-pop.” While that name gives a good sense of the colorful, vaporous songs the trio creates, Dawkins is doing a lot more than merely throwing paint at a wall.

Though they grew up together in the D.C. area (Bethesda, Maryland to be exact), the band crafted much of their debut effort while they were attending colleges in different cities. Songwriter/instrumentalist Jack Jobst lived in Denver, guitarist Carson Lystad attended school in Nashville, and songwriter/producer Will Guerry was studying abroad, in London. They traded Logic files back and forth, and fleshed out general concepts for the EP in preparation for the few weeks they’d be able to spend together in D.C., playing a handful of shows and refining the tracks that would eventually form Ep1.

We talked with the group, who were preparing to return to D.C. from their respective universities, about pan-Atlantic collaboration, and how they see themselves fitting into their hometown scene.

Do each of you have specific roles in the group, or does it vary depending on the song?

Carson Lystad: We definitely have roles. All of the songs come together in different ways, but Will and Jack have been the primary songwriters for a long time. Will also does most of the production; he is sort of our primary guy at the computer with the headphones on.

Will Guerry: And Carson is mainly our guitarist. He does a bunch of pedal stuff, while Jack will move around between guitar and keys. I feel like I’m rarely playing an actual instrument, I’m usually the one tinkering with a bunch of electronics and singing.

Jack Jobst: And when we play live, we play with a drummer and bass player as well.

How did you decide to start this project? You guys all grew up together and had played in bands before?

Guerry: Oh, yeah. Early on, we played in a variety of cover bands together, and later in high school, Jack and I started writing these little singer-songwriter things—there was a ukelele involved [Laughs]. Then, slowly, we expanded the group into something that had more of a rock sound.

Lystad: And all of that has been part of the process to get to where we are now, and between each little stop, we’ve learned a lot. The same is true for the EP—we got a lot of good information from working on this project that we’ll try to carry over into the next one.

Considering you all live in different cities, how does the collaboration actually work? Are you trading files and ideas over email?

Lystad: It’s mostly a trading thing for sure, but some of the core nucleus of the songs on this EP actually came from us jamming together; some of these songs even trace back a couple of years to hour-long jams that we reinterpreted and reworked. From there, it’s just been a long process of one of us working on something, then sending over the files and everyone giving their comments. Then, it gets worked on for a couple more weeks, and sent back and forth again.

Guerry: We definitely talk about the songs a lot, too. We’ll upload a project and then talk about the idea behind it, or the direction it should go in before recording the other parts.

Jobst: Again, going back to how we’ve developed from project to project: On this EP, there was more of an emphasis on setting out core concepts during the songwriting process. So we’d have conversations about whether we were hitting those [conceptual] marks, and what more we could focus on. But a lot of that is in preparation for the small amount of time when we’re home together on breaks, so that we can hit the ground running when we finally get to be together in the same room.

And how often does that happen, where all three of your are physically in the same room to work on music?

Jobst: Three or four times a year. Summer and winter breaks have been big for us.

Lystad: We really pack them in, too. The last few breaks have hardly been ‘breaks,’ because we’ve gotten home and have just been working, though it’s obviously a lot of fun.

Though you don’t live there full time, how do you think you fit into the D.C. music scene?

Lystad: To be honest, we’re still very much navigating our way around it, but at the very least, we’ve found there is a very friendly and supportive scene in D.C., which is something I think has always been there. I live in Nashville right now, which is so competitive and cutthroat by comparison.

Jobst: It’s also a city that doesn’t have just one artist that represents it. There isn’t necessarily that ‘champion’ of D.C. right now. So what you get is something that is pretty tight-knit, but scattered in terms of there being a lot of people trying different things just for the sake of creating music.

Lystad: Yeah, D.C. had the punk and the go-go thing back in the day, but now there are a lot of different sounds going on. There are a lot of people doing more DJ and electronic/bass music stuff, and we’ve been able to somewhat slide in with them and make some friends that way—even though we have a bit more intensity and rock sensibility than some of the people we’ve played with. It’s fun for us to be the ones whipping out guitars at shows.

Jobst: And with D.C.’s rent being super high right now, there are creative spaces that exist, but maintaining them for long just isn’t realistic; so there are houses and warehouses that throw shows, but you never know for how long they might stick around. People do jump on it and try to make the most of it while they can.

And how does the OTHERFEELS artist collective, which you are a part of, fit into this?

Lystad: OTHERFEELS is not, like, an official agreement or anything; it’s a collective effort to really just make stuff happen, and James Scott (who runs the collective) works so hard and is just dedicated and talented. He’s going to be famous someday.

Jobst: A lot of what James is trying to do is to unify D.C. in some way, using this collective to bridge the gap between a few different scenes. He spends a lot of time going to local shows and seeing what is happening, and who is undiscovered, and then makes connections from that. It’s been really awesome to be a part of that, and it’s given us the opportunity to meet and experience a lot of interesting and largely unknown acts around D.C.

How long would you say you spent writing and working on this EP?

Guerry: Really, we had been working on a bunch of different songs for a long time, so a big part of the process for this EP was just figuring out what our sound was. For a while, we were still working on an old project that we had started in high school. Then we decided that we should start a new project, with a slightly different group of people, [which became Dawkins]. After a while, we had all these songs that weren’t necessarily all of the same core—there was a lot of exploring the types of songs that we could make between us, or what felt natural at the time. Towards the end of the process of making the EP, we started narrowing it down and finding a cohesive sound. Once we found that, we wrote a few new songs that fit within that framework.

Lystad: There was also a lot of time between the making of many of these songs, too, which left a lot of time for different ideas and approaches to emerge. There would sometimes come a point where we had been sitting on a mix of a song for a year or so, and then we’d start to rethink it, or see how the new approaches we’d been working with could re-energize that material.

Guerry: When you have that much time to work on something, I think you can almost forget what you liked about a song. There were a bunch of songs that we just lost interest in or forgot about. We outgrew the songs in the process of making them.

Jobst: Yeah, there are a lot of demos and songs that we made together that aren’t on the record, but they are songs that led us to the sound we have now.

Was there a certain objective you had in mind for the EP, either aesthetically or conceptually?

Guerry: There was no real conceptual agenda. We weren’t trying to represent a particular sound or scene, it was more about us finding ways to cohesively incorporate certain influences. In the future, I think we want to be much more organized going into working on a record, in terms of putting stricter limits on the sounds we use and the kind of songwriting style.

What are some of the influences that you felt were important to incorporate?

Lystad: There are some maybe less overt influences, like hip-hop—which we have all been really into and all try to work a little bit of that in certain places. But then there are some of the more obvious shared influences, like Radiohead—especially from a songwriting front, and in terms of their melodies. But it really comes from all over.

Guerry: We’ve been told not to say Radiohead is an influence, but we fucking love Radiohead [Laughs].

Lystad: All three of us like so much different music, and part of being in this project while living in different cities and having to take up things individually, is that it lets each of us have our own influences and grow into being our own musicians. When we come together for this project, that combination yields a certain sound, but if you took all of us individually, we’d all have our own distinct approach and our own favorite styles. Together, those things just start colliding in different ways.