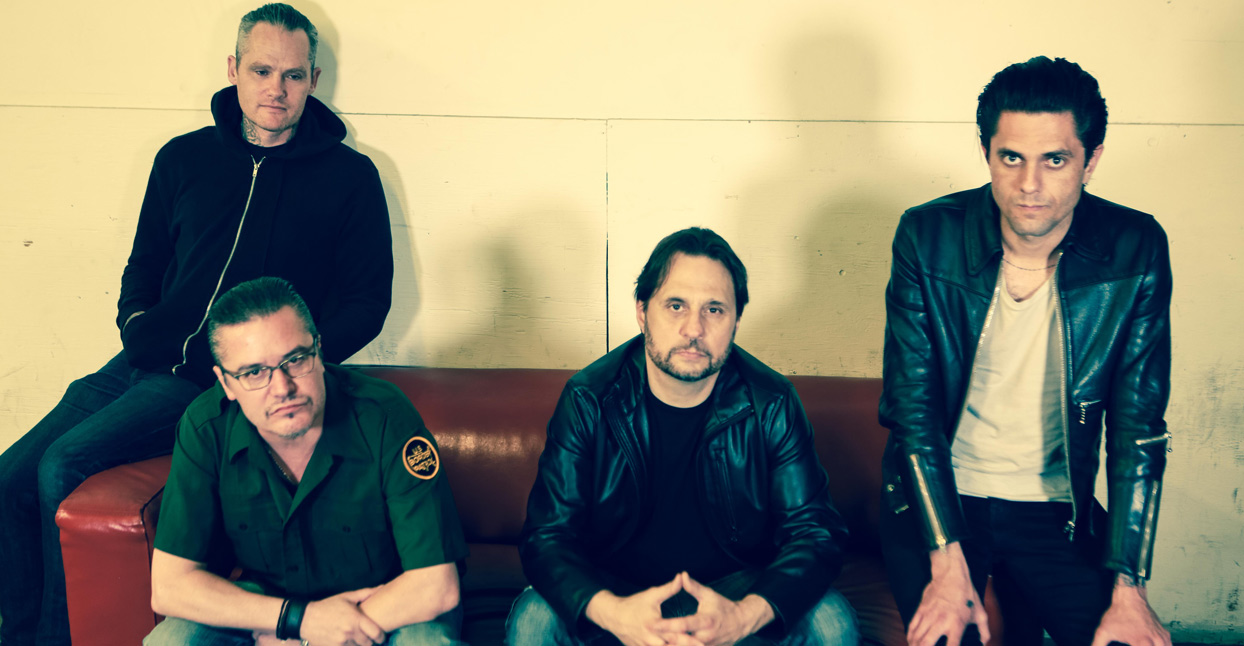 Dead Cross is no ordinary punk band. For one thing, they’re fronted by Faith No More’s Mike Patton, who’s in top form as a vocal gymnast, spitting, squealing, harmonizing, and heaving his way through the band’s concise, intense debut album.

Supplying the quartet’s barrage of grinding bass and guitar riffs are Justin Pearson (of The Locust and Retox) and Mike Crain (also of Retox) who execute several frantic time changes per track as they sprint in tandem towards the record’s finish line.

Capping this off is the drumming prowess of none other than ex-Slayer skin-pounder Dave Lombardo. Returning to his hardcore roots, but with the added experience of knowing how to, “weed out the bullshit and focus on what’s important,” Lombardo’s peerless beats feel more urgent, brutal, and intricate than ever.

Patton, too, seems reinvigorated by the project. Given free rein to bawl his blessed lungs out about racy subjects like hookers, skinheads, and penile bleeding, Patton hasn’t sounded this stirred up and snotty since his collaboration with The Dillinger Escape Plan in 2002.

Lombardo has worked with Patton in the past, forging avant-garde metal together in the supergroup Fantômas. The drummer once said that if Pablo Picasso was a musician, he would sound like Fantômas. Dead Cross, he feels, is more like Jackson Pollock: “Very abstract, noisy, in-your-face, and complex. Some of his pictures are just like distortion on canvas and that’s how I see Dead Cross.”

We spoke with Lombardo about keeping things hardcore in life after Slayer.

How does it feel to form an angry punk band when you’re in your early 50s?

Absolutely amazing. I have the same anger and aggression as when I was younger. I still get angry at current affairs. That doesn’t change, and I don’t think my music, or the way I express myself, should change. I’m sure there’ll be one day when I’ll express myself in a very happy, mellow, everything’s beautiful, sunshine-and-Care-Bears style. Right now, I’m still pissed.

Aren’t people supposed to become mellower and more conservative as they get older?

I don’t seem to be falling in that direction. I’m not going there, either, if I don’t have to. If my body and mind want to continue on this hardcore path and I’m physically able, I will. There’s no need to say I’m going to retire when I still have so much energy to contribute. No slowing down, my friend.

Which was the first punk band that you fell in love with?

There were four: Minor Threat, Circle Jerks, Dead Kennedys, and Suicidal Tendencies. Those were the ones that kicked off my aggression—or the acceptance of my aggression—in music. When I was listening to classic rock radio—or just ‘rock radio’ back then in the late ‘70s and early ‘80s—I would be interested in bands that had more edge, or songs that had more aggression in them, where the drummer played a little harder and faster. Then I discovered a genre where all the music was angry, aggressive, and powerful, so the floodgates opened for me. It was phenomenal.

The album’s run time is a minute under that of Slayer’s 1986 thrash masterpiece Reign In Blood. Was that intentional?

Absolute coincidence. We did not know. Once we started sequencing the songs and timing everything, we realized it was similar to Reign In Blood’s length. The Dead Cross album is rich with melodies, it flows seamlessly, and you don’t feel bored by it at any point. It’s rare in this day and age to find an album that you can listen to from beginning to end as an entire piece, rather than just picking out favorite songs. Sometimes albums become a little redundant and it’s like, ‘OK, next song. You guys have juiced that riff long enough. It’s getting a little boring. Your guitar solo has got to go.’ This album has minimal, if any, solos. Why add more to something that feels complete? It would be an ego thing to say, ‘I want this riff to be longer,’ just so the guitarist could play in front of the crowd a little longer. It’s not about that. It’s not about the single individual person.

There was some psychological trickery going on, but I threw it right back at him. We’re both big fans of motorsports. I used to ride motorcycles, and he did as well. He had a really bad accident, just like I did. So he would tell me, [starts whispering] ‘Dave, when you’re performing this song, we’re gonna record it right now, I want you to picture yourself on your motorcycle. You’re at a race, you’re about to take off, and you’re about to hit this jump…’ He goes on describing this moment about racing on this motorcycle and then I turned to him and I said, ‘…without a helmet!’ And he goes, ‘YES! YES! THAT’S IT! RECORD! RECORD!’ He has a way of getting to you, but it’s good because sometimes musicians can put too much pressure on themselves in the studio and not allow the creative juices to flow. He tries to break down that wall to pull the best performance out of you. It does work. I’ve seen it work.

It seems like you’re in a pretty happy place. Do you miss Slayer?

I’ve weeded out all negativity in my life. I mean, there’s probably a couple of people that I still need to shake off. For the most part, everyone I work with—Suicidal Tendencies, Dead Cross, Misfits—everyone I surround myself with is very positive, and I refuse to go back to being around anyone with any kind of negativity. So I’m sure that could answer your question. Even though Dead Cross are angry at the world’s climate right now, there’s nothing that comes between us. Towards the outside world, yes, we are angry. But within ourselves? Nah.