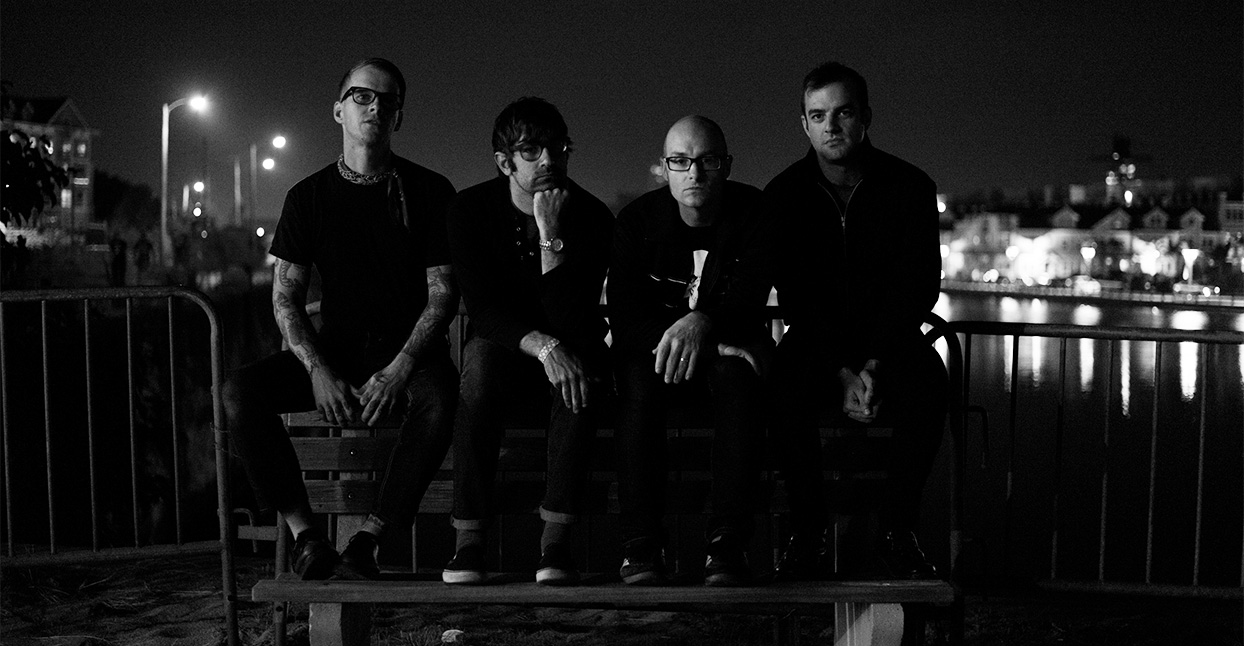 It’s a crowded Thursday evening at Murph’s in Fishtown, an eternally-gentrifying neighborhood in Northern Philadelphia. The bar and its patrons exude a certain working class realism—there’s nothing inauthentic about this Irish pub (which doubles as an Italian restaurant). The people who go here do so to avoid the economic changes happening all around them. And why wouldn’t they? They’re living in an area that’s morphing into something few will soon be able to afford, and as a result, they feel angry, forgotten, and upset with their government.

These are themes Dark Blue frontman John Sharkey lll knows well. “When I was growing up, Philadelphia did not look like what it looks like today,” he says, pausing to sip a jet-black stout. “Fishtown was a [poor] white ghetto. That’s the best way to describe it. Dirty. A working-class city.” To Sharkey, Philly’s transformation is symptomatic of a particularly bleak American trend. He’s spent years considering it, and now, he’s made a record about it. And in order to understand Start of the World, Dark Blue’s second full-length, you need to understand Sharkey.

Before there was Dark Blue, there was Clockcleaner, Sharkey’s punk band. They called it quits when he relocated from Philadelphia to Australia to be with his now-wife, who he’d met at SXSW just months prior. While there, he began writing songs for a new post-punk project, Puerto Rico Flowers, who performed at that time with members of Melbourne’s Total Control. For years, Sharkey would move back and forth between Philadelphia and Australia; Dark Blue’s birth took place during his third move down under. And while Sharkey was experiencing both new love and a new location, Dark Blue was a reaction to neither. “It was actually about being with no one,” he says. “We went to Canberra, which is integral. It’s not like Melbourne or Sydney. It’s right in the middle [of the country]. I got a job as a night watchman at the Australian Institute of Sport, and they assign you to different places. They said, ‘You’re going to work at the AIS and you’re going to work at night.’ I’d never done night-shift work. I got used to it after a while. I wouldn’t let myself get into that sleep pattern of sleeping all day. I would go home and sleep until about one o’clock or two, wake up and have the rest of my day, then go to sleep for about an hour before I went to work at midnight. My daughter was just born at that point. I didn’t want to be a dad who was sleeping all the time.”

That lonely and disorienting balance—of working a dangerous and lonely job at night and ensuring that he would be present for his children—caused Sharkey to become sleep-deprived. “I was always kind of hazy at night, walking around this campus by myself, on these patrols you do every hour,” he explains. “I was listening to a lot of Sham 69 and Blitz. In that weird haze, that orange light of the campus, that sleep-deprived mania, this idea formed. ‘Maybe I can fuck these songs [that I love] up. Maybe I could take this style and make it something that’s not just pub rock.’” And so, Dark Blue was born.

At the core of Dark Blue’s sound, which is driven by Sharkey’s deep baritone, is a gnawing sense of anxiety. “My nerves are already shot. Some nights, when you’re really tired, your emotions are all out of whack. Some nights I would be doing these weird patrols and have crazy thoughts like, ‘Who the fuck is breaking into my house?’” He recalls. “There were times where I’d start crying—just tear up, because I was so emotional—then I’d come back down. There’s a song on the new record called ‘Paralyzed by Fear.’ All the thoughts in that song are thoughts I had walking around that I scrunched together. I remember writing the lyrics to that song, walking around in one of those lucid states. It was interesting to see what it was doing to me, mentally. I could still step back and observe it. It would go in waves: panic, then a moment of calm. It sounds terrible, but I quite enjoyed it.”

Working a job that allows for introspection—even in the strange bleached-out blur of artificial light—gave Sharkey the insight and confidence to write in the first person. When he wrote for Clockcleaner, he wrote from the viewpoints of various imagined characters. Dark Blue is Sharkey, fully exposed on record. That vulnerability allows for the anger on Start of the World to resonate—when he’s criticizing something, it’s because that something is worthy of criticism.

The album opens with a sample from the 1947 Orson Welles film Lady from Shanghai, the tale of a man set up for a murder he didn’t commit that concludes in a legendary shootout in a hall of mirrors. It quickly morphs into “Union of Buffoons,” which has its eyes set on American greed. “I was working for a company that was going through a union vote, so the union was coming in and pitching, and the anti-union guys were coming in and trying to bully everyone into not voting for it,” he says. “It was disgusting. Lots of whispering and intimidation. I quit the job not long after. That is what America is: bullying people into not having any rights, with no one to represent them. That song is a letter to my former employers, who, to this day, I still have a lot of contempt for in my heart. And will, always.”

The most memorable song on Start of the World arrives late in its runtime, a goth-meets-doo-wop track called “Bombs on the Beach.” It’s the only song where Sharkey assumes another identity, singing from the perspective of a mother who just lost her children in a very specific way. “I got really fucked up when those four [Palestinian] kids were blown up on the shore of Gaza. An IDF boat gunned down four kids playing soccer on a beach in 2014. They were gunned down from a boat. They were told to shoot them like dogs. They got away with it like it was no big deal. I got weepy singing it. I could only get through a couple takes of it to piece it together.”

Start of the World is an angry record, something Sharkey sees as a necessity. “This whole record—I don’t think it’s anti-American. I think it’s judgmental of everything I was taught about being an American,” he begins. “Coming back here after being gone for a while, seeing the rest of what I’ve seen, meeting different people, marrying someone from the Middle East. I’ve had a fair bit of enlightenment for a shitty boy from Philadelphia.”