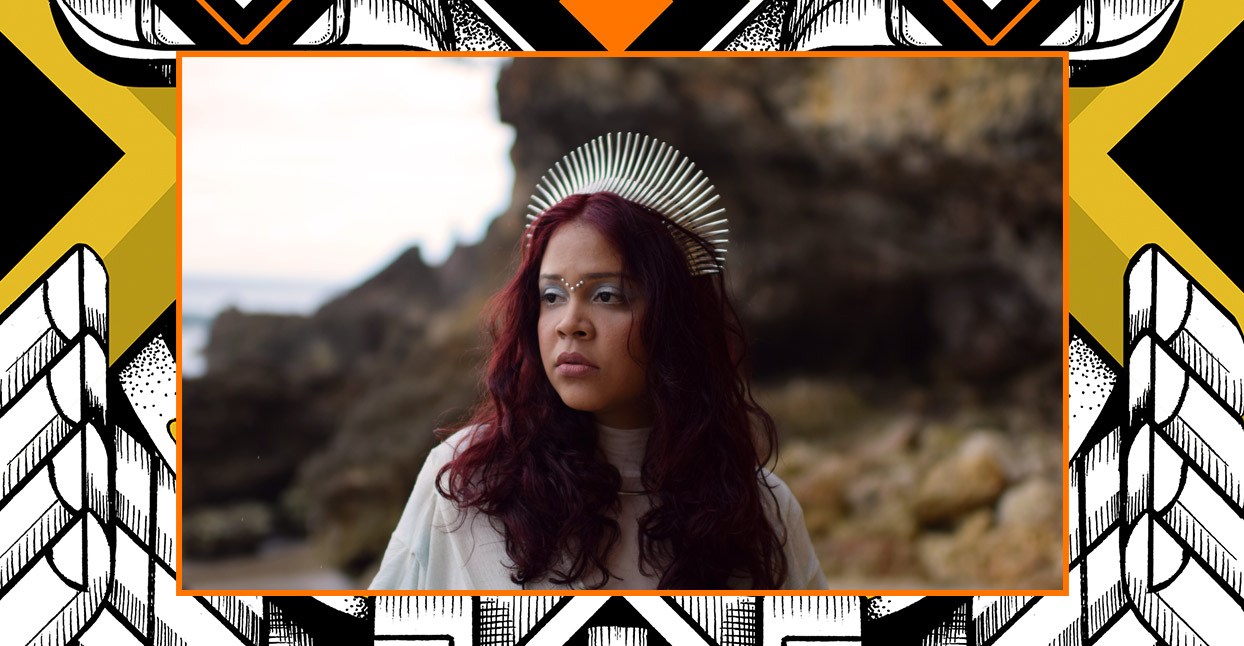 The first time Carolina Oliveros sang with the other members of her band, Combo Chimbita, she felt a powerful ancestral spirit join them onstage. She calls this spirit Ahomale, and says that it has been with the band as a guiding presence ever since. “I feel like it’s a force that manifests in all of us every time we perform. I feel like it’s a feminine energy, but it can be many things that manifest in me. Not just when I sing, but when I dress, with my instruments and how I move,” she explains in Spanish, with drummer Dilemastronauta translating.

The New York City-based quartet has been making inventive, Afro-Caribbean inspired music together since 2015. Dilemastronauta, guitarist Niño Lento, and bassist/keyboardist Prince of Queens were jamming together once a month at Brooklyn venue Barbès. Oliveros, who knew them through shared musical circles, had been dropping by. One fateful night, the vocalist and percussionist asked if she could sing with them when something clicked in a potent way. Prince of Queens remembers the moment vividly. “She got on the mic and grabbed the guacharaca. She just went and it, and I think we all felt like ‘OK, this is something we should hold on to,” he recalls.

For Oliveros, that something is Ahomale, which is also the title of the combo’s new album and the theme that runs through it. “Ahomale is a Yoruba word that means a being or person who is able to commune with the ancestors and receive messages,” lead singer, principal lyricist, and guacharaca player Oliveros explains. It is the embodiment of the spiritual wisdom of those who came before. Dilemastronauta describes the album’s lyrics in terms of a spiritual odyssey, venturing, “A way to describe the songs is with a story. To me, it’s like the story of a female warrior going through her battle. It could be an epic battle, but it can also be a personal journey.” Oliveros qualifies this by saying that Ahomale is neither male nor female and not necessarily a warrior.

This feminine, fighting spirit is a palpable presence for the band, one that comes with a message they feel compelled to share. “Every time we play there is definitely a spiritual war happening. Because when we sing and send out a message, we transmit these sort of divine vibrations that will, perhaps, drive people to transform their lives or thinking. Words are powerful and it’s possible our lyrics can become synchronized with a new revolution of thought,” the singer asserts.

She makes it clear that the band is not religious in nature, saying, “We’re not trying to convince anyone to follow a specific path.” Still, it’s hard to separate the Afro-Caribbean musical styles, such as cumbia or salsa, that inspire them from African and indigenous spirituality. Oliveros spells it out, saying, “It’s the root. Traditional music is the root of all the rhythms we play, which is not just cumbia. We play music from Panama and music from Haiti. It’s all ritualistic music. It’s very connected because everything comes from there.”

Tradition may be the starting point for the band’s music, but innovation is an equally defining feature of their music. They don’t play cumbia, or any other single style. They experiment and follow their instincts, creating new music, which they describe as “tropical futurism.” Dilemastronauta says he was listening to a lot of Dominican music, particularly a folkloric group called Enerolisa y Grupo de Salve de Mata Los Indios while working on the song “Revelación (Candela),” but the song’s manic polyrhythms are his own creation.

According Oliveros they never need worry about getting lost as they explore, because they have their ancestors to show them the way. When asked about her band’s musical development on their new album, she says, “We are continuing the story of evolving the way we think, but guided by our ancestors, who are the ones dictating our [musical] path.”

Lyrics are an important part of communicating this ancestral guidance, and though Oliveros sings in Spanish, she isn’t concerned when performing for an audience that is mostly non-Spanish speaking, as she did on their recent tour with Parquet Courts. “I conceive of music not as a language but as energy in movement,” she says. “When you’re vibing, the people receiving that will most likely vibe with you, because we’re all a ball of vibrations.” She certainly gets the message across.