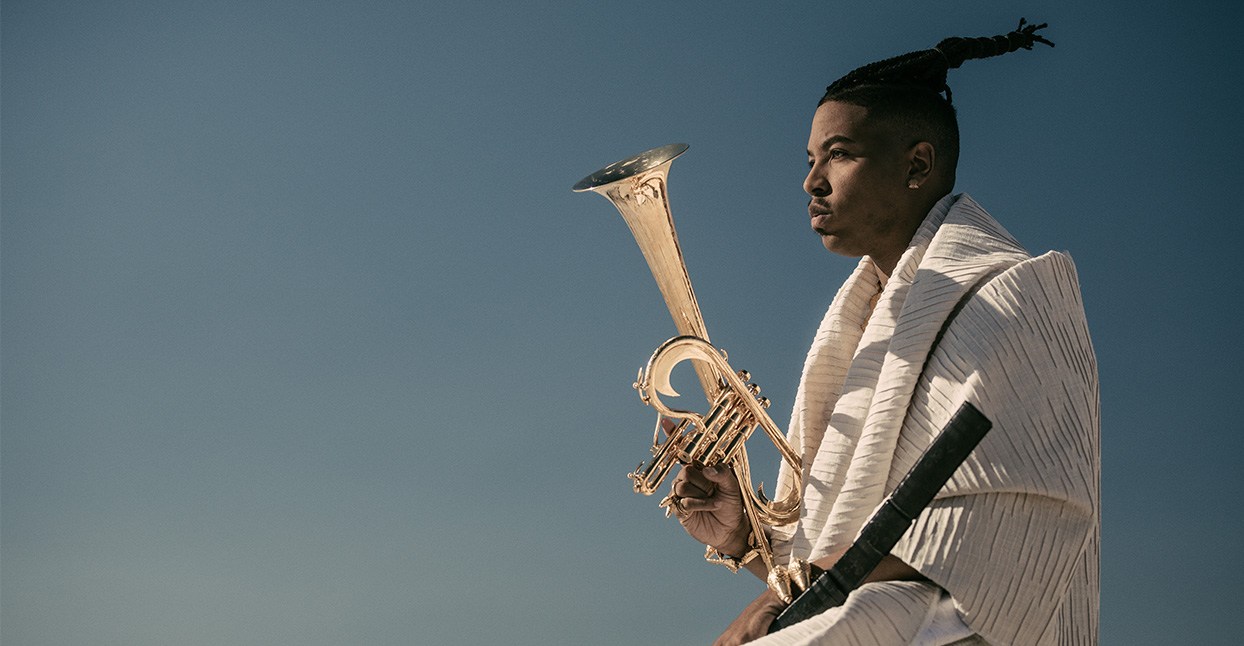 The title of Christian Scott aTunde Adjuah’s 14th release is deceptive. Ancestral Recall is many things, but a throwback it is not.

“Most people are going to think what I’m talking about is only in the past,” Adjuah acknowledges. “But when I use the word ‘ancestral,’ I don’t just mean what came before. We’re taught in the culture that I come from, the Black Indian culture of New Orleans, that you have the ability to channel or access not just what came behind you, but also what is coming. When I’m saying what I’m saying to you, it’s my great-great-grandfather and my great-great-grandson also speaking to you.”

If the traditions of the Mardi Gras Indians (his uncle is the jazz saxophonist and “Big Chief” Donald Harrison) informed Adjuah’s worldview, that’s just one of the many influences that shape Ancestral Recall. The album represents Adjuah’s attempt to integrate America’s many musical traditions—those of West Africa, the Afro-Eurasian diasporas, and indigenous peoples—into a single, but multidimensional, national musical language.

It’s a trajectory that Adjuah began with his 2015 album Stretch Music, a turning point for the trumpeter, whose concept was to incorporate as many musical styles (acoustic and electric) as possible into one overarching aesthetic. 2017’s The Centennial Trilogy filtered that concept through Adjuah’s outspoken political perspective. Ancestral Recall, he says, attacks that same artistic matrix from another, more focused angle, drawing on yet another aspect of the Crescent City’s history and culture.

“The school I went to as a little boy was William Frantz Elementary School, the first desegregated elementary school in the country,” he says. “I saw white and black families enduring food insecurity, being undereducated. The people had more in common than they had different. But they saw each other as nemeses, and reacted as such. The only place I didn’t see that happen was when music was being played. Part of the reason that I wanted to sink my teeth into music is that it was the only thing I saw in my community growing up that served as a unifying factor.”

Whether Ancestral Recall has that same power to unify is yet to be seen. What is certain, though, is that it doesn’t sound like anything Scott has ever done before. It’s a stunning refinement of the ideas present in Stretch Music and The Centennial Trilogy, allowing their many flavors of rhythm both to interlock and to play off each other. It creates a sense of harmony and counterpoint: two ideas we generally associate with tone and melody rather than beats and rhythm. Adjuah accentuates them with his trumpet (either Harmon-muted or electronically processed, if not both) and synthesizers, along with appearances by such longtime band members as bassist Kris Funn and flutist Elena Pinderhughes, as well as vocalists Saul Williams and Weedie Braimah.

At some points (“Diviner,” “Before”), the music is primarily ethereal, consumed with long, airy tones, as if pondering something higher; at other points (“I Own the Night,” “Prophesy”), it’s bracingly visceral and earthly, with fiery percussion and growling drones. It is always both at once, though, and its most sublime moments (“Her Arrival,” Forevergirl,” “Ritual”) are both in equal measure. The whole album is also shrouded in mystery, with something raw and unrefined—but also intricate and entrancing—at its core. That, ultimately, is what Ancestral Recall celebrates.

“We don’t talk about the fact that people have really belittling ideas about deeply rhythmic cultures,” Adjuah explains. “We don’t talk about how people believe that those cultures—and on one level, you might describe them as black and brown and tan musical cultures—are not as sophisticated, musically, as cultures that prioritize harmony and melody. The impetus of the sound and the album was, ‘How do I take the things that people look at as a pejorative about my musical culture, and show that those are actually the most sophisticated, most nuanced, most beautiful? And if you see that that’s the case, what does that mean for ideas that people hold about your culture, and about you?’”

There’s something very (pan-)American about Adjuah’s musical and political philosophy. In its idea of an all-encompassing American musical idiom, Ancestral Recall illustrates the country’s founding ideals of freedom, equality, and rugged individualism—but also its frequent failure to live up to those ideals. In that sense, his work is a patriotic gesture. And Adjuah affirms that he has a deeply held sense of patriotism. At the same time, though, he challenges the way that word has traditionally been used.

“I think part of what’s superimposed on you is this idea of a six-foot, blond-haired, blue-eyed white male that carries a gun—it’s that sort of idea that is projected as a patriot,” he says. “In some contexts that can be deeply patriotic, and in other contexts that can be seen as the boogeyman. But we accept these singular narratives of entire groups of people without ever weighing them or thinking about them, as if there’s only one story of America. In a place with over 300 million people, how could there be one story? That’s a very American mode of operating, to completely accept narrow ideas about entire groups of people,” he continues, “but do I think a record like Ancestral Recall has an opportunity to unify people and has an opportunity to help them see? Yeah, I do. A lot of the issues that we endure as people come out of a deficit of vision, come out of conditioning. I think it’s the job of the patriot to break that down.”

The past and the present are its foundation, but Ancestral Recall is decidedly a vision for the future.