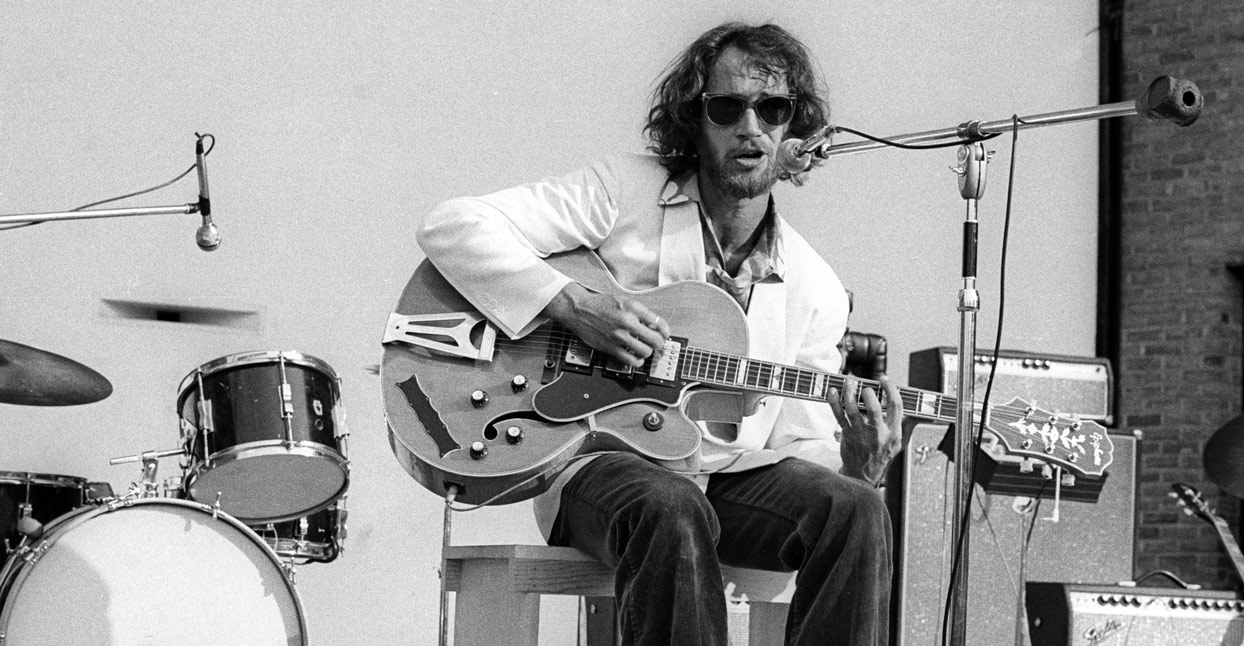 “It was pretty far out there. When people heard it, they thought I’d lost my mind,” That’s original Nashville outlaw Chris Gantry, talking about his 1973 album At the House of Cash, adding, “which I had, thank God. Or else I never would have done it.” At a time when the biggest thing coming out of Music City was countrypolitan schlock, Gantry was holed up at his pal Johnny Cash’s place, cutting brilliantly strange-sounding, peyote-inspired tunes about UFOs and lizards.

At the House of Cash was too freaky for mid-’70s Nashville. It’s probably too freaky for 2017 Nashville. “Nobody would pick it up,” Gantry remembers. “It was just too off the map for around here. People were putting out eclectic, art-driven records in other places.” It’s taken four and a half decades for his left-field, nearly-lost masterpiece to finally see the light of day.

Gantry, now 75, still lives and works in Nashville, but he was a Music City outsider from the beginning. He came from Jamaica, Queens, and in the early ’60s he was part of a rock ‘n’ roll duo that bore a curious connection to a couple of more famous Queens natives—Gantry and Len Chiriaki recorded as Tom & Jerry after the name was abandoned by a young Paul Simon and Art Garfunkel. Around the same time, Gantry was soaking up the influence of the Greenwich Village folk scene and the aura of the Beat culture that still hung in the air.

Informed by rock, urban folk, and Beat poetry, Gantry was an unlikely prospect for the Music Row publishing houses, but after getting kicked out of a college about 100 miles from Nashville in 1963, he made his way to the country music hub. “I realized there was a counterculture going on here,” he recalls, “but the music business was still the old guard. They were holding on for dear life, but the revolution was moving in and things were changing. If there was an outlaw movement down the road, I might have brought the seed of that with me, because eventually the songs I wrote with that vibe started to get recorded by other artists in country music.”

Somehow Gantry’s idiosyncratic, folk-influenced songs found a home in Nashville, and he became a staff writer at “Long Black Veil” co-songwriter Marijohn Wilkin’s upstart publishing company Buckhorn Music. “She put a quote out in Billboard at that time that they were signing Chris Gantry, and that he was Nashville’s answer to Bob Dylan,” Gantry says. “That gave me impetus to be even more individual and really seek my own voice.” About a year later, Kris Kristofferson arrived at Buckhorn, and though it was Kristofferson who really galvanized the outlaw movement in Nashville in the early ’70s, it was Gantry who got the ball rolling. “I know I influenced a lot of early Kris songs, and I was influenced by a lot of his stuff too,” says Gantry. “He and I were hanging out together every day for four years at Buckhorn, and then when we left we went to Combine Music and we were there for another two years, and we saw each other every day there too; we were around each other all the time—osmosis.”

Gantry’s big breakthrough came when Glen Campbell scored a hit with his song “Dreams of the Everyday Housewife,” which was included on the milestone 1968 album Wichita Lineman, preceding the legendary title track’s release as a single. That same year, Gantry released his debut album, Introspection, including his own version of the song alongside a batch of gracefully orchestrated, harmonically and lyrically sophisticated folk-rock tunes. Though there was no shortage of such sounds coming from either coast, it was still an anomaly in Nashville. “It was probably one of the first real singer/songwriter albums that was orchestrated like a Glen Campbell record, but Nashville-style,” Gantry assesses. “But it just did not catch on in the way that I thought it would.”

After Gantry fell under the spell of Charles Mingus’s jazz innovations, his muse led him even further afield, and his next album, 1970’s Motor Mouth, made its predecessor seem staid by comparison. ” I didn’t want to stay Mr. ‘Dreams of the Everyday Housewife’ for the rest of my life,” he says. “So I changed, and I got a lot of slack for it. I sang those songs when I was on the road with Kris. I was his opening act, and I would do all that wacky shit opening for Kris.”

By 1973, Gantry was befriended by Johnny Cash, who’d recorded Gantry’s “Allegheny” and brought him on his TV show to sing it himself. The Man in Black offered his fellow maverick refuge on a number of levels. “I had just been busted for growing pot on my farm,” remembers Gantry, “which back then was like a federal offense. And John called me up and said, ‘Just come out and live at the house until shit blows over.'”

Cash also signed Gantry to his publishing company, and while he was staying with him, he gave Gantry free reign to make his next record at his House of Cash home studio. But a crucial inspiration for the album came from outside of Nashville. “Right before I signed with Johnny, I went to Mexico,” explains Gantry, “and met up with a guy I had met some years before down there, and we ended up in a peyote ritual down in Oaxaca. Coming out of that peyote experience I wrote three songs down there that were on this Cash album. One was ‘The Lizard,’ one was ‘Different,’ and the other was ‘Away Away.’ I came back to Nashville with those three songs and everything else just fell out of that.”

When Cash heard the final results, Gantry says he told him, “’Chris, June and I listened to your record last night, and I don’t think even the drug people are gonna understand it.’” But Gantry wasn’t deterred. “I liked what he said, because it just let me know that I had achieved what I set out to do,” he says. “I was trying to defy genre, to create a genre.”

The album literally starts off in outer space, with Gantry singing about flying saucers amid otherworldly electronic sounds on the aforementioned peyote-inspired “Away Away.” The impressionistic lyrics, swooping vocal, and offbeat orchestrations of “Different” feel more like a Radiohead outtake than a mid-’70s Nashville product. “Tear” is a Beat-influenced spoken poem with abstract, Eastern-tinged backing from renowned folk-jazz band Oregon. “Flower of the Mountain” moves through a dizzying array of unexpected changes, framed by grandly plucked harp and angular woodwinds. And “The Lizard,” another product of peyote visions, is just downright freaky, starting off with the line “The lizard introduced me to the orange flying bird,” and getting progressively further out from there, as the narrator converses with the reptile, and then with the ghost of his own late grandfather.

“It was relatable to me,” says Gantry of his striking, surreal imagery, “because I was experiencing that. But as far as other people were concerned, I could have been Captain Beefheart.” Perhaps unsurprisingly, the album found no takers among the era’s Nashville-based labels. “It was pretty far out there,” he says. “Nobody would do anything for that. And then right after that, John sold his company and all that stuff got lost, including some of his stuff.”

Ready to try something different, Gantry moved to Key West for six years, pursuing prose as a novelist and playwright, winning the Tennessee Williams playwriting contest and hanging out with songwriter and author Shel Silverstein and celebrated novelist Thomas McGuane. He eventually returned to Nashville and resumed his music career, but the Cash sessions were basically forgotten.

“It got lost for 45 years,” Gantry says. “I had no idea where it was, until I got a call from John Carter [Cash, Johnny’s son]. He told me, ‘Chris, we’re looking around here and we found some tapes of yours with your name on it.’ They sent them to me and I sent them to [reissue producer] Jerry DeCicca.”

However belatedly, At the House of Cash has finally been released, with DeCicca playing midwife for Drag City, and even all these years later, it remains an astonishing piece of work. “My feeling is that I outlasted the 45 years that it took for this record to find ears that liked it and saw value in it,” says Gantry.

Despite the decades it took for the record’s time to come, the years have not diminished its arresting individuality. “I don’t like saying that anybody is ahead of their time,” says Gantry. “Everybody is in the exact time they’re supposed to be in. I was in the exact time I was supposed to be in musically when I did the House of Cash. I wasn’t 50 years ahead or 100 years behind, I was exactly where I should be, because I was doing what an artist is supposed to do, he’s supposed to keep progressing in his art, and keep moving forward.”

Today Gantry is still busy performing, writing, and recording, with a number of albums out over the last few years and a new solo acoustic record in the works. And he’s sanguine about the way things worked out with At the House of Cash. “I did the right thing by making that record,” he says. “I might not be a household name, and I might not have made the paychecks that a lot of the other guys have done, but I stayed true to artistic pursuit, and I’m still doing it, and that is my legacy. That is what I was born to do.”