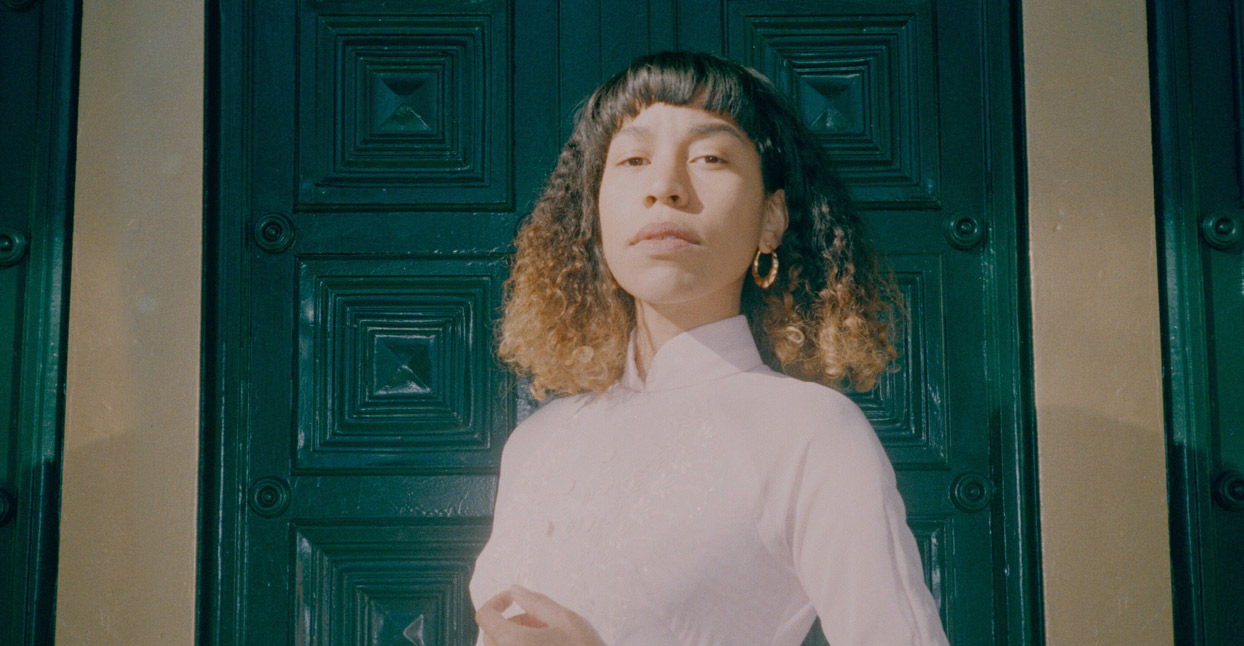 Vocalist Charlotte Dos Santos is Norwegian by birth, but her music draws influence from basically everywhere but her home country. That’s thanks in part to her parents, especially her dad’s Brazilian blood. “I listened to a lot of samba and bossa nova,” she says, “and I listened to a lot of music from other places, like Spain. My mother, she loved flamenco and Arabic music.”

Press play on Cleo, her excellent new album, and you’ll hear 10 tracks as informed by global music as they are by soul and jazz, the latter of which Dos Santos studied at the Berklee College of Music. It’s album that was more than four years in the making; as Dos Santos puts it, she had to learn how to put her feelings into song, which she says a semester studying in Spain helped her to do. She needed to realize the woman she was, and to figure out the woman she wants to be.

We spoke to Dos Santos about growing up in Norway, the American musical influences that permeated her country, Cleo’s layers, and how she wanted to be a pop star in elementary school.

I lived in England right after high school, when I was 19. I studied music there for a year. I did a diploma program there in contemporary music, and then I moved back to Norway. I stayed there for a little bit, worked at a school. I was conducting a kids’ choir there, and then I decided I wanted to apply for Berklee.

Which side of the family does your musical ability come from?

My father’s side, but both my parents come from very artistic families. On my mother’s side, we had painters and writers, and on my father’s side, while none of them have been musicians, the whole Afro-Brazilian blood we have—it’s just very ingrained in the culture. All Brazilians are so immersed in a lot of music and rhythms. But both of my parents are enthusiastic about music.

Do you remember the first moment you wanted to study music?

I don’t remember when, I just remember singing when I was super young. I was three and I got a recorder, and I would annoy the whole family by singing into it. But I do remember in first grade, we all had to say what we wanted to be when we grew up, and I remember saying I wanted to be a pop star. The teacher was like, ‘No, Charlotte, you have to pick a legitimate job. You can’t do that.’ But I said, ‘That’s what I want to do,’ and I just remember being so extremely torn, like, ‘What do I say? I don’t know what I want to do other than music.’ I said ‘veterinarian.’ I just had to make it up. [Laughs]

I know you produced most of your new album, Cleo. How many instruments have you learned to play over your years of studying?

Piano is the instrument I’m most comfortable with. I’ve also had a lot of percussion ensemble teaching. I say vocals are my main instruments, though, and piano is my second instrument, out of respect for all other people who play these instruments extremely well. I have a saxophone, and I have a trumpet, but those are just something I mess around with, and I’m not at a place where I can record myself and be like, ‘Yeah, this sounds great.’ [Laughs]

There are obvious jazz and neo-soul influences in your music from America, like D’Angelo and Erykah Badu, but who are some artists from Norway or the Scandinavian region who’ve influenced your music?

Oh, that’s hard. Growing up, I was very anti-Norwegian music.

The American influence is everywhere, and maybe it was the time [the late ‘90s and early ‘00s] as well. I just didn’t think it was cool growing up. But I listened to a lot of music from other places, like Spain, and my mother, she loved flamenco and Arabic music. I listened to a lot of samba and bossa nova. Norwegian music, I didn’t really appreciate until I got older and heard, for example, music from our native people, the Sami people, with joik [a powerful and emotional singing style] and stuff like that.

How did studying in Spain change you as a musician?

All of the atoms in my body changed during that semester, because it was the most incredible year I’ve had. It changed me as to how I feel when I write music. It’s important for me to feel something when I write music, and that opened up new ways and techniques. I was studying flamenco arranging and Mediterranean arranging, so I had to think differently. Even though the sounds of the music were familiar to me and I always enjoyed it, [it helped] knowing the theory and story behind it—how similar it was to blues music, and how the [Romani] people [making the music] were so depressed. If it’s painful, it can resonate, and that makes me feel a lot. I’m now open to do stuff I wouldn’t do earlier. I’m more comfortable and daring and playful. Like the first track of Cleo, [‘Sumer Is Icumen In’], I wrote that [in Spain]. It was actually a school assignment.

I was going to ask what the similarities or differences were between making jazz and soul and flamenco music, but you kind of just pointed out they come from a similar place of pain and hurt.

Yeah, I think so. The rawness of [soul and flamenco], it’s all so organic—there are so few instruments necessary. In a jazz trio, you just have a bass, piano, and maybe a vocalist or a guitar or drums, and in flamenco, you have a guitar, a human, and maybe a cajon [a wooden box percussion], and that’s all it takes to make something so intense.

Who is ‘Cleo,’ and how is she similar to yourself?

Cleo is a part of me, I guess, but she’s also the woman I feel I’m becoming. I wanted to create this female character because I want more girls to have a role model. I want girls to feel they can do whatever they want, and be who they want to be—especially in Norway, where I grew up without any role models that looked like me. Also, Cleo is a role model for me. She keeps me going. She keeps me trying to be the best person I can be—to keep writing and working. She’s my grandmother, she’s my great-grandmother, she’s my mom, she’s all the women that are strong that’ve inspired me.

She sounds like she’s someone who got hard on herself because of the things she didn’t know, but by the end of the album, she comes out stronger and wise because of everything she went through.

You’re right. I wrote ‘Cleo’ in 2014, right before I went to Spain, and I remember feeling Cleo, she is me. But then I was like, ‘No, I want it to be a transition.’ I wanted to, as you’re saying, write a story, almost like a diary, that people could listen to and take pieces of. I’ve even had men come to me like, ‘Ugh, this song makes me feel like this,’ or ‘This song makes me think like that,’ or ‘’Good Sign’ made me call my ex.’ I don’t know if that’s a good thing or bad thing [laughs], but that’s rewarding.

You have the a line in ‘King of Hearts’ that goes, ‘You think you know how to love, but you don’t.’ That’s a pretty universal concept.

It’s real. I’m an all-or-nothing person. I’m very passionate, I’m very emotional. But the song is about egotistical people—they need other people around to make them feel well. They think they’re loving you, but it’s really just to fill their own egotistical needs. It’s not a give-and-take, it’s just a one-way thing.

Why is ‘Cleo’ sung in the third person when the rest of the album is sung in first person?

It’s because it is so personal, and it kind of is about me—and I didn’t want it to be. I remember when I wrote it, I didn’t want people to think, ‘Why is she always singing about herself?’ [Laughs] I wanted to make it a more universal story and distance it from myself.

So as the project came along, you decided you wanted to make the album a story where Cleo championed her past, or at least learned from it? It could’ve ended a lot grislier.

These are songs I’ve produced since 2013. Three of the tracks on there, the ones that are produced by Fredfades, they’re all old recordings. I don’t even have the stems for them anymore. It’s such an eclectic project. I started some of the things that are on there; the one with Arabic letters called ‘New Beginnings,’ I wrote that a few months ago, and I wrote ‘It’s Over Bobby’ last summer. [The label and I] were looking at the order of the songs, and my label thought it would be cool to end with ‘It’s Over Bobby’. Then I was like, ‘Yeah, it looks like I’m falling in love on the first side, then side B represents more of the personal aspect of becoming a woman, the identity and doing things on your own, and breaking free from things.’

It took so long to make this project. You’ll definitely need to live a little and grow and to make something like this again, right?

Exactly, that’s what I’ve been saying all along. I’ve written and recorded a lot of stuff in-between, and it was a little hard to leave songs off [Cleo]. It started off that we were going to do an EP, but now Cleo is 10 tracks, so it’s kind of an album. But I didn’t want to call it an album, because I’ve already started recording an album that is more instrumental, and it’s more of an introduction to who I am as a musician. I’ve written so much over the years, and these are songs that I don’t want to die. One needs to live, and learn, and fall, and get up again, and cry, and then laugh. Just little-by-little—that’s how things work with me. I don’t press, I don’t push the writing process.

Obviously, as a musician, you want your music to be heard. But do you have an overall goal in mind that would satisfy you?

I feel when I don’t have anything to say anymore, then I’ll be satisfied. When I feel emptied out—not emptied, that sounds like I’m being drained. I don’t even know if that will happen. Mostly for me as a musician, I just want to share and feel like I have a voice. Hopefully, it’s something I’ll do until I grow old—I can see myself being 90 and being, ‘OK, now I don’t have anything to say.’ [Laughs]

If you’ve made it to 90 still making music, I’d call that a successful career.

I’m hoping for a fruitful career, for sure.