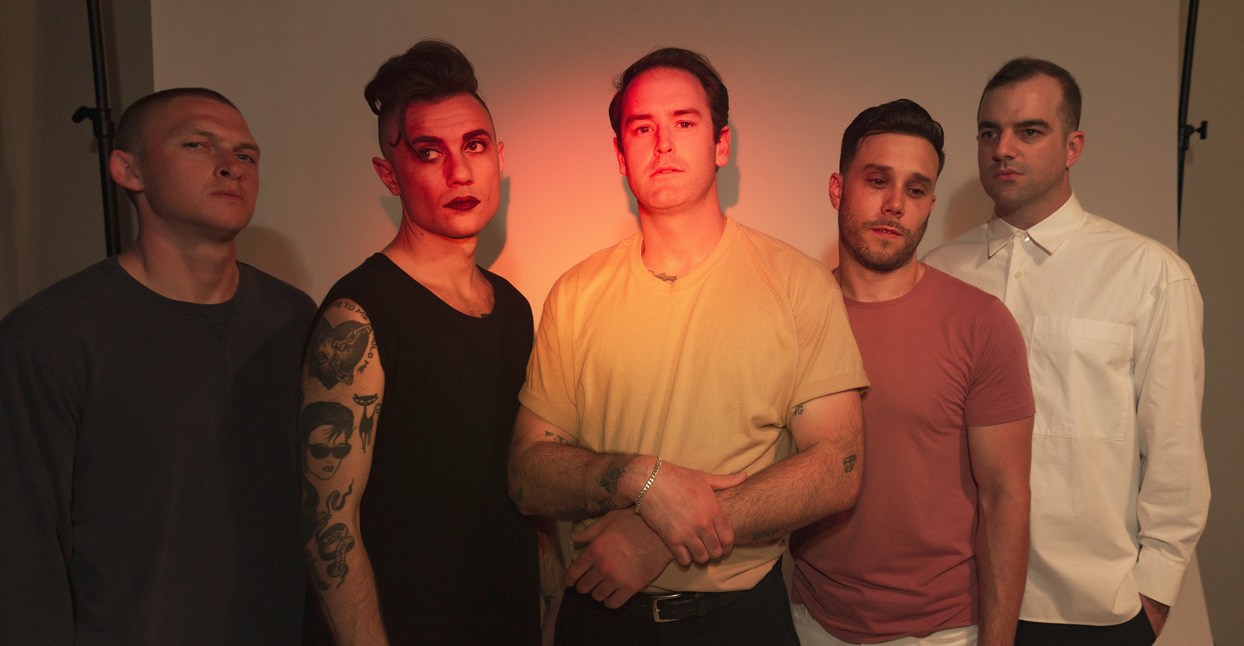 The first few seconds of In The Spirit World Now, the sixth studio album by Californian five-piece Ceremony, may explode with ecstatic synths and a hooky bassline, but its first line makes it immediately evident why the band’s name was taken from one of the last songs Joy Division wrote together: “It’s getting harder for me to be all right,” vocalist Ross Farrar gravely intones.

That song, “Turn Away The Bad Thing,” offers a heads-up on the direction Ceremony are headed. The band ditched their previous hardcore sound in favor of volatile indie on 2012’s Zoo, and mimicked Joy Division’s sense of despair on 2015’s The L-Shaped Man. Now, they offer something different: introspective rumination set against sonic exuberance. In the song’s chorus, Farrar repeats, “I hope you’ll think of me one day / But even in my dreams / I wasn’t good to you.” It’s vulnerable confession, one that hints at what the title’s “bad thing” is: Farrar himself.

“[The album] looks happy or bright and shiny, but underneath, it’s really not,” admits Farrar. It’s that same sense of dissonance that drew him to bands like New Order and The Fall. “It’s sad, or in a state of dolor,” he adds. While the musical buoyancy was an artistic decision, the dour mood certainly was not. Since the release of The L-Shaped Man, Farrar dealt with heartbreak from failed relationships and grief from the deaths of friends and family members, both of which forced him to confront the overbearing reality of mortality. On the disco-ish “Say Goodbye To Them,” he laments, “Everyone’s alive now / And those who aren’t once were / But everyone’s leaving / Goodbye.”

His concerns extend beyond just physical death. On “Presaging The End,” a song that calls to mind The Smiths or The Cure, Farrar mourns the ephemeral nature of happiness itself: “Beauty / Is to feel / A change in front of you / It comes so quickly / Then it leaves,” he sings, while bubbly synths and stuttering rhythms provide a colorful backdrop. Farrar finds himself grappling with this feeling often: “When you’re making something for the first time, I think you go through a state of euphoria, or you kind of go through a high of the new thing,” he explains. “I think it’s like that with love and all kinds of other things. When you’re making something or starting something, you’re always kind of seduced by it. But after time settles, you kind of start to go back and think about it, and you wonder, ‘Is this really the best thing for me?’” This inability to recapture that early sense of elation results in one of the album’s most poignant lines: “You’ll always be more alive yesterday.”

Interspersed throughout the record are bits of isolated spoken word poetry—“/,” “//,” and “///”—all of which are meant to act as one unit, but are broken up by individual songs. The poem in its entirety, titled “California Jungle Dream States End” was written by Farrar, and it has allowed him to reflect further the themes that crop up throughout the album. “It’s about losing control in a certain instance, feeling kind of lost, but kind of also grounded, too,” he explains. The verses are read by Brooks Haxton, a critically acclaimed poet who happened to be Farrar’s mentor at Syracuse University. The two worked together on Farrar’s thesis, which consisted of around 70 poems. “I had a lot of trouble with this record because, I was in the middle of a program,” admits Farrar, who’s working on an MFA in poetry. “I was learning how to approach things differently, edit things differently, write things differently.” The difference between writing songs and writing poetry is significant, and for Farrar, lyrics come easier. That’s why the moments of pure poetry are striking—they are the pinnacle of vulnerability, with no music to obscure them, standing in utter solitude.

Ironically, In The Spirit World Now‘s lyrics often read like poetry—eloquent and piercing. “I had to learn / How to give / This pain / Permission to exist / I had to wait / It didn’t show,” Farrar sings on “Say Goodbye To Them.” Discoveries like that one, which are sprinkled across the record. But there is also a corresponding sense of home: Having pushed through the sorrow, the band now stand resilient. They’re pessimistic and beleaguered, sure—but they’ve got nowhere to go but up.